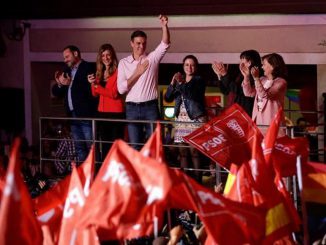 Portugal and Spain continue to be striking exceptions to the rise of rightwing populism in Europe, a fact that’s commonly explained by the relatively recent experience both countries have had of living under fascist regimes. (Franco in Spain, and Salazar in Portugal.) That horrific past still seems very much alive in the minds of voters. Today’s Madrid edition of the El Pais newspaper for example, carried the election results in Spain right alongside a news story about a recent set of documents detailing Franco’s wartime complicity in the deporting of tens of thousands of Spanish republicans from France to Nazi concentration camps, during the years after the Spanish Civil War. History and its lessons have not been submerged in some fake “Make Spain Great Again” appeal to the country’s worst instincts.

Yes, the far right Vox party now has a presence in the Spanish Congress for the first time, but its haul of 24 seats has fallen far short of the giddy pre-election predictions of 38-39 seats and a kingmaker role within a right-wing coalition government. Most of Vox’s electoral gains have been at the expense of the PP, the old mainstream conservative party, which had a truly terrible night. Formerly, the PP held 137 seats, now slashed to only 66 seats on today’s results.

In Spain, the magic number required to form a government is 176 seats. The ruling Socialist Party (PSOE) led by current Prime Minister Pedro Sanchez has won 123 seats, up from 85 in the 2016 election. PSOE is likely to once again form a coalition government with the leftist party Podemos (42 seats, down dramatically from 71 seats last time around) and a handful of regional parties including the Basque regional party PSE-EE, an offshoot of PSOE which has won 15 seats on election night.

According to a poll taken last week by El Pais, a coalition between PSOE and the urban conservative party Cuidadanos would be the most popular outcome with the Spanish public, and this arrangement would have the virtue of consigning the right wing PP and the far right Vox to the margins of Spanish politics for a generation. Yet the sticking point to such an arrangement is the question of independence for Catalonia.

Cuidadanos has made it clear it would not join any arrangement that fosters Catalan independence. The rise of Vox, such as it has been, has also been based –besides the Islamophobic and misogynist elements in its programme – on Vox positioning itself as the true champion of Spanish unity, and its ancient heritage.

So… it is not as if populist sentiments do not exist in Spain. Yet the main trigger for them is Catalan independence, not anti-immigrant bigotry. Undoubtedly, PSOE shed some votes in this election because of its softer line on Catalonia, but this only underlines that it is the Catalan question that is driving Spanish populism (such as it is) and not the usual basket of anti-immigrant, anti-feminist and anti-Muslim policies that have proved so successful elsewhere in Europe.

Arguably, it was the desire to reject the Vox agenda that also drove the high voter turnout (close on 75%, up nearly 9% on 2016) despite this being the third election in Spain within four years. In Catalonia, turnout was especially high. As one Andalusian politician had warned after last year’s regional election, “ When the left don’t mobilise, the right wins.” That lesson seems to have been learned.

For now, right wing populism enjoys only a limited foothold in Spain and Portugal alike. On today’s results, Vox may have gained its presence in Congress, but this has been largely at the expense of the PP that it always would need to govern, and what progress it has made has been due to its virulently nostalgic appeal to Spanish unity. Overall, a good day for social democracy. Today’s results mean that the Iberian peninsula still remains the stronghold of left wing governance in Europe.

Women in music, and Rosalia

Latin music has been a dominant trend in Western popular music for the past three years, underlined by the sight of eternal cultural magpie Madonna belatedly getting on the Latin bandwagon with her new single, “Medellin”. There’s a wider problem, though. The rise to superstardom of Taylor Swift, Beyonce, Rihanna, Ariana Grande, Lorde (and in hip hop, Cardi B) has given a sense of progress for women musicians that’s belied by their still minimal presence on the charts, and their virtual disappearance from – for example – the country music radio and sales/streaming/downloads.

For example: my own quick survey of Billboard’s country music top 30 for the week ending April 27 found only 5 tracks by female artists, with the entire top ten being by blokes. Moreover, Luke Bryant’s No 1 “Beautiful Crazy” (for nine straight weeks!) happens to be a song about one of those sexy gals who is beautiful but crazy because y’know, sometimes she’ll just willfully change her mind….

Beautiful crazy/She can’t help but amaze me/The way that she dances/Ain’t afraid to take chances/And wears her heart on her sleeve/Yeah, she’s crazy/But her crazy’s beautiful to me…

Well, no one ever turned to US country music for woke sentiments. But the gender imbalance in this genre is still striking, and as New York magazine says, it helps to explain why Taylor Swift went pop.

According to a recent study done in conjunction with the Women of Music Action Network in Nashville, country stations are playing women only 11.3 percent of the time. That means just one out of every ten songs about a truck are sung by a woman on country radio today. Artists with massive crossover appeal like Kacey Musgraves and Carrie Underwood may be responsible for the slight bump since the nadir of country girls’ representation on the airwaves in 2014. Then, only 7.4 percent of country radio’s songs were by women, which Refinery 29 pointed out means you’d hear a woman sing only after 44 songs by dudes.

In hip hop/urban r&b the situation is actually almost as bad. Take out Cardi B and Halsey, and even the current six women in the top 30 looks grim. Only in pop – where 15 out of the top 40 tracks are by women or are fronted by women – do we get anywhere near a respectable ratio. So, in the light of today’s election in Spain, here’s its new international superstar Rosalia – firstly with the innovations to flamenco that brought her to global attention…

And then with the second big hit (after “Malamente” from her 2018 album) Here she is doing “Pienso En Tu Mira” live, on Jools Holland…