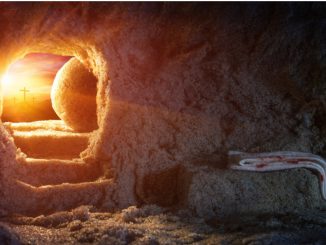 The “You are Us” messaging since the Christchurch mosque attacks has been a genuine and heartwarming recognition of our shared humanity. Given this current mood of mutual tolerance, it seemed worthwhile to take a closer look at what Islam says about the crucifixion and Easter, which is the most important festival on the Christian calendar.

Before getting down to specifics… Any Martian arriving on Earth would have to be struck by the fact that three of humanity’s great religions – Judaism, Christianity and Islam – all share a common family tree leading back to Abraham, at least. This spiritual kinship is expressed via the continuity of the relationships between these faiths. Through the teachings of Jesus, Christianity thinks of itself as having completed the message of Judaism, while Islam similarly thinks of itself as completing (through the teachings of the Prophet) the teachings of Christianity. Things become even more interesting though, as the focus gets more specific – say, on the crucifixion itself. Islam’s view of it both differs from, and draws upon, the early Christian views about the event.

There are about 100 verses in the Koran that mention Jesus Christ, but only one of them mentions the crucifixion. In passing, this probably reflects the fundamental difference between the two religions. Christianity regards Jesus as being the equally divine and equally human son of God, and treats his crucifixion as an essential act of atonement that makes salvation possible for us fallible humans. To Muslims though, Jesus is a major prophet, but he is not divine. So his crucifixion does not, as Christians believe, redeem sins and deliver the possibility of salvation. This may be one reason why, as mentioned, there is only one reference to the crucifixion in the Koran (at Surah 4:155-156) and this sole passage is notoriously prone to multiple interpretations. (Jamal al Din al-Qasimi [1866-1914] devoted 100 pages of scholarly exegesis to this one passage). This translation by Marmaduke Pickthall contains the main message, and it raises the main areas of dispute:

And because of their [the Jews] saying: We slew the Messiah, Jesus son of Mary, Allah’s messenger – they slew him not nor crucified him, but it appeared so unto them; and lo! those who disagree concerning it are in doubt thereof; they have no knowledge thereof save pursuit of a conjecture; they slew him not for certain.

Down through history, this passage has been taken by many aggrieved Christians to simply mean that Muslims deny Christ’s crucifixion – both as an event in history, and in its meaning as the deliverance of our potential for salvation. Arguably though, there are at least three other ways of interpreting that passage.

1. Is it mainly about blame? Is the Koran here primarily denying that the Jews were responsible for killing Christ – who was after crucified, a Roman form of execution, in a country that was under Roman occupation. For centuries, the status of Jews as Christ-killers was later used to justify the massacres of Jews in pogroms carried out by Christians with the blessing of Christian priests. The Koran seems to be saying the opposite.

By this reading, the Koran was creating a grey area on the question of responsibility – ‘they slew him not, nor crucified him’ even though “it appeared so unto them”. This reading is re-inforced by the observation in the preceding verse which points out that Jews had been capable in the past, of killing their prophets. (In fact, the Old Testament records only two such cases, with neither being major prophets.) But not this time, the Koran sems to be saying, not in the case of Jesus. It may have appeared to be so, but it wasn’t the case. Similarly (see The Heights 7:159) the Koran defends a faction of 7th century Jews in glowing terms: “Among the people of Moses is a nation that guides others by the truth and establishes justice.”

2. Or, is this passage simply about killing the man, but not his message? That key phrase: “It appeared so unto them” could be taken to mean that his body had apparently been killed… but little did the perpetrators realise that the spirit and message of this messenger of God would live on, regardless. Death of the body is, in this sense, only illusory.

3. Or, is this passage claiming that Jesus wasn’t actually crucified, but someone else – or some phantom image of him – got crucified in his place? To modern readers, this interpretation may seem utterly bizarre, but some versions of that key Arabic phrase “shubbiha latoum” (“It appeared so unto them”) have rather freely translated the phrase as “but [another] was made to resemble him to them”. Some later commentaries even claim that the person crucified at Calvary was actually Judas, not Jesus. The translation by Alan Jones (2007) which is reportedly very close to the original Arabic, renders the phrase as “but it was made to seem so, to them”.

As I said, this notion of a crucified imposter or – more to the point – a deceptive phantom image put on the cross by God in order to spare his Son, may seem very peculiar to us today. Yet it was the considered view of the early Christian heresy known as Docetism.

One can feel some sympathy today for the Docetians. Basically, they couldn’t accept the logic of “patripassianism” whereby God himself was said to have died on the Cross. Equally, they had trouble with the related issue of why God couldn’t forgive humanity for its sins without requiring his only Son to be sacrificed first. In the Judaic tradition, some Docetians reasoned, God had stopped Abraham from going so far as to sacrifice his son Isaac – so, logically, why would He demand the same sacrifice in full of Himself? The only solution the Docetians could come up with was that it was someone else on the Cross, or (more likely) a God-created visual effect. Jesus’ whole existence and bodily form, some of the more literal-minded Docetians eventually reasoned, had been entirely an illusion that looked real, but wasn’t.

In Todd Lawson’s 2009 book The Crucifixion and the Qu’ran (which is a comprehensive review of the Christian and Moslem literature on the subject) Lawson writes that the Docetians’ explanation had gained quite wide currency during the early centuries of the Christian era. Large excerpts from Lawson’s book are available online here.

The point being, as some commentators quoted by Lawson have observed, the Koranic passage 4:157-158 cited above can be read as a purely Docetist view of the crucifixion, as an essentially illusory event: “it [only] appeared so to them”. The Jews thought they were seeing Jesus crucified, but it was either someone else made to look like Him, or a phantom who had been purpose-built by God. Unfortunately for the Docetians, it didn’t seem to help their case with the emerging Church authorities that the Bible at times seemed to support their view of the crucifixion as a kind of special effect and illusion. Take Philippians 2: 5-8 for instance which can also be read in Docetian terms:

Let this mind be in you which was also in Christ Jesus, who, being in the form of God, did not consider it robbery to be equal with God, but made Himself of no reputation, taking the form of a bondservant, and coming in the likeness of men. And being found in appearance as a man, He humbled Himself and became obedient to the point of death, even the death of the cross.

What I’m getting at here is that the wrestling between the two religions over the crucifixion – both as an historical event and as a key redemptive tenet for Christians – does indeed throw up some major differences between the two religions. But it also shows how their histories – and the spiritual issues that Easter raises every year – are deeply entwined. The Koran treats both Mary and Jesus with great reverence. It accepts that Jesus was born of a virgin and that he worked miracles. One Koranic miracle attributed to Jesus that I particularly like that is that he could mould birds out of clay, and then breathe life into them such that would then flew away into the sky…

Of course, Christians will argue the main Easter event is the resurrection, not the crucifixion. Here too though, the Koran seems to have no trouble with Jesus and his resurrection. In the book of Mariam (ie Mary) at verse 19:33 for instance, we find this line: “And peace is on me the day I was born and the day I will die, and the day I am raised alive.”

No doubt, major differences exist between Islam and Christianity, mainly over the status and nature to be attributed to Jesus. Yet hopefully, the current impulse to feel “You are us” will encourage many believers (on both sides) to look more deeply and compassionately at the basis of each other’s beliefs, given that they share such a surprising amount of common ground.

And then of course, there’s Patti Smith’s point of view, that Jesus died for somebody’s sins, but not mine…

And from the Easter album itself, there’s her call to resurrection, for the oppressed: