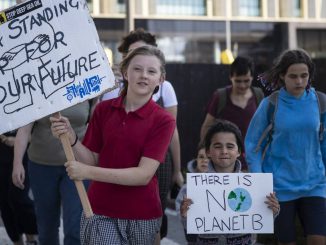 Last August, when 15 year old Greta Thunberg first began her lonely school strike in Sweden against climate change, she had a succinct message for those adults telling her that she would be better off being in class: “If you don’t give a shit about my future, why should I?”

Now, eight months later, Thunberg’s solitary action has snowballed into a worldwide movement in 92 countries, at last count. On Friday, March 15, New Zealand teenagers will be holding their own school strike against climate change, as part of the global action being held on that day.

Basically, this is a protest and call to action against the ongoing failure to do anything to halt the planetary destruction that will be our main legacy for the next generation. Locally, the school strike has won a ton of support for bringing climate change to the fore.

Yet the strikers don’t want mere expressions of support. They want action. Its weird, as Thunberg says, for the people who have brought about this mess to be now claiming that they support the condemnation of their complicity in it. Predictably, the school strikers in New Zealand have been criticized by some people for skipping classes. A few brain dead authority figures have even seen fit to jeer at them:

“If my environmental council students came to me and said they wanted to strike, I’d say ‘What’s it going to achieve?’,” he said. “We’re concerned that students are wasting good learning time.”

That jaded “what’s it going to achieve” line is quite a message. Give up kids, because Michael Williams and his ilk already have, apparently. As for the concern about “wasting” good learning time… that’s code for dumping on the strikers for calling critical attention to the failures of their elders and betters. Haven’t these kids got better things to do? Greta Thunberg has seen that sort of criticism for what it is:

“They are desperately trying to change the subject whenever the school strikes come up. They know they can’t win this fight, because they haven’t done anything.”

Closer to home, the New Zealand children organising Friday’s action have been equally adept at dealing with their own critics:

Christchurch strike organiser Lucy Gray, 12, said students were striking for their future. “Teachers, they strike all the time to get what they want and that’s just money. We want our future; I think that should be allowed.”

This parallel between (a) teachers’ striking over wages and conditions and (b) pupils striking over the planet’s survival prospects has been seized on and exploited by a few politicians. Amusingly, National Party leader Simon Bridges suggested that maybe the school strike should be held on a day that isn’t a school day:\

National Party leader Simon Bridges said climate change was an important issue, but the strike should not have been held on a school day. He said the protest could have been timed to coincide with the upcoming strike by secondary school teachers on 3 April.

Birds of a feather, right. Why, it may be climate change right now, but next thing – if they’re given the chance to learn about strikes and other forms of resistance – these children might even come to object to being trained for a life as a corporate drone. The wheels of commerce might then grind to a halt. And while that might be good for climate change, it would be a terrible, terrible thing for shareholder profits. Which is pretty much the cause that Simon Bridges exists to serve.

The linkages between business-as-usual, planetary warming and the destruction of species are of course, the very connections that those in authority would prefer the nation’s young do not make, at least not with any urgency. What schoolchildren are being advised instead is to stay in class and learn how to stand on the sidelines, wringing their hands ineffectually – just like their parents, and their parents before them, have done. Now, if you don’t mind, business needs to get on with extracting the last drops of profit from our dying eco-systems.

Already though, the school strike has been a success before it even begins. Arguably, it has done more to engage the community about climate change, species destruction and rising sea levels than anything else has managed to do over the past few years. Nationwide, it is igniting conversations around the dinner table about climate change – its causes and its effects – in hundreds of thousands of New Zealand homes. It might even push the issue of climate change higher up the 6pm television news bulletins tomorrow night and one hopes, subsequently.

Alone of course, such strikes will not stop the destruction of the planet. Actions need to follow and the strikers (see below) have several in mind. Yet at the very least, this generation of kids will be able to tell their children what they did to try and stop the process.

Footnote One: Climate change is not the only avenue through which human action is destroying the school global heritage of the school strikers. Bio-diversity is also in crisis, and is being caused by the same wilfully blind economic forces. Last year, the WWF reported that human action has – since 1970 alone – wiped out 60% of the world’s mammals, birds, fish and reptiles. Large animals are being destroyed at an alarming rate.

An analysis of 362 megafauna species found that 70% of them are in decline, with 59% classed as threatened by the International Union for Conservation of Nature. Direct killing by humans is the leading cause across all classes of animals, the study states. A range of maladies including intensive agriculture, toxins and invasive competitors are also helping to trigger these declines.

Across the world, 1,200 species are in danger of extinction, as they risk losing 90% of their habitat. Furthermore, 70% of the world’s remaining wilderness areas are now contained in only five countries.

Footnote Two: As the movement she ignited has spread around the world, Greta Thunberg has remained remarkably focussed:

Asked whether she has become more optimistic because the climate issue has risen up the political agenda and politicians in the US and Europe are considering green New Deals that would ramp up the transition to renewable energy, her reply is brutally honest. “No, I am not more hopeful than when I started. The emissions are increasing and that is the only thing that matters. I think that needs to be our focus. We cannot talk about anything else.”

Right. That’s important because, while we talked before about the evils of climate change, New Zealand’s gross emissions 1990-2016 have inexorably risen by nearly 20% over that period.

* New Zealand’s gross emissions have increased 19.6 per cent since 1990

* In 2016 the agriculture and energy sectors were the two largest contributors to New Zealand’s gross emissions, at 49.2 per cent and 39.8 per cent respectively.

* Net emissions have increased by 54.2 per cent since 1990 because of more trees being cut down and an increase in gross emissions.

Footnote Three: With all of that in mind, urgent, credible action is being proposed by the school strikers, on their website. Among their demands: they want a comprehensive Zero Carbon Act passed by Parliament – which would have to include action on the contributions to climate change being made by agriculture and energy – in order to set New Zealand on the path towards carbon neutrality.

They also want all exploration and extraction of fossil fuels to stop immediately, and are asking for investments to be made into renewable energy alternatives.

The list of demands also asks for the Governments plans to reach emission targets to be “fast tracked, well planned and transparent.”