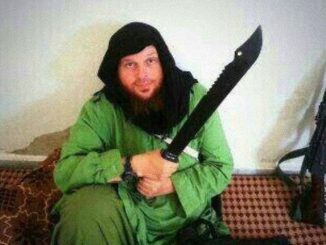 Mark Taylor, the Kiwi recruit to ISIS, ultimately put himself in the hands of the Kurdish forces in northern Syria.

That was smart of him, and/or lucky. The Kurds seem to be the only forces offering anything like due process to their ISIS captives, and have refused to impose the death penalty on them. As the Israeli Haaretz newspaper has reported:

After defeating ISIS in battle, Syria’s Kurds are now eager to show they can bring justice against the group’s members. The emphasis is on leniency and reconciliation — in marked contrast to Iraq, where harsh and swift verdicts on ISIS suspects seem geared to vengeance.

Reportedly, roughly 400 ISIS foreign fighters and their families – comprising about 2,000 women and children – are being held by the Kurds. To their dismay, the Kurds are finding that (a) France and other European countries don’t want their citizens back and seem happy to abandon them to the tender mercies of local courts inside Syria and Baghdad and in any case (b) these countries don’t recognize the authority of Kurdish-run courts, since the Kurds don’t have a homeland recognized by the global community. Ironically, the only courts with any commitment at all to just procedures are the ones the outside world deems to have no authority. At the same time, the outside world shows no interest in intervening in those countries that it does recognize, even though they’re handing out vigilante “justice” to foreigners.

What does New Zealand plan to do about Taylor? Not much at all, apparently. As yesterday’s press conference made clear, the coalition government’s attitude is that it – and the previous National government – had repeatedly warned people against going to Syria. Also, New Zealand has no diplomatic resources able to represent Taylor and other New Zealanders in a similar situation, even if it felt inclined to do so. The only advice that our government is currently offering to Taylor (and to any other jihadis or their wives) is that they would need to make their own way to the nearest NZ diplomatic outpost – in Turkey – and seek help.

Given the troubled relations between the Kurds and Turkey this seems unlikely, not to mention that the Turks would also be unlikely to give Taylor safe passage to the consulate doorstep. Is our consulate in Turkey asking the Turks about their policy in this regard? Are we afraid of dealing with the Kurds directly, lest that lend the Kurds political legitimacy? Quite possibly, the Kurds are wanting to use their ISIS captives to engage directly with foreign countries as part of their push for autonomy.

Taylor, as his interview with the Australian Broadcasting Corporation linked to above made clear, is not a very attractive personality. As an ISIS fighter for five years, he is very likely to have participated in some despicable acts. Significantly, a geo-positioning mistake that he made on Twitter led to a subsequent fatal drone attack on ISIS positions. Other ISIS foreign recruits have been executed on the spot for far less – yet Taylor survived, which suggests a degree of seniority and/or friends and guardians well placed in the ISIS hierarchy.

Despite all this, he is a New Zealand citizen. When I asked Justice Minister Andrew Little yesterday what penalty regime Taylor would face if and when he ever managed to get back here, Little was not forthcoming: “I can’t get ahead of either decision to prosecute or what the consequences of a prosecution might be. The Terrorism Suppression Act is one piece of legislation, there’s also the Crimes Act.” When I asked whether New Zealand would be taking any steps to ensure that Taylor had adequate legal representation if he is subjected to judicial proceedings abroad, Little replied that it wasn’t our practice to do so, he said, when New Zealanders faced prosecution abroad.

Maybe not. Yet these are not the usual circumstances. If the Kurds hand him over to anyone else, Taylor seems likely to be executed. Given the summary nature of the justice being dispensed to ISIS fighters and their families – particularly in Iraq – the coalition government’s passivity about the fate of the New Zealanders involved seems less than adequate. Taylor is, after all, not the only Kiwi ISIS recruit likely to be affected. This NZ Herald report in December indicated that a handful of other Kiwis have put themselves at similar risk.

According to SIS head Rebecca Kitteridge, there were also a small number of Kiwi war brides within the ISIS ranks.

Reportedly, many of the captured foreign ISIS women are being sentenced to death by hanging or are receiving life sentences after ten minute ’trials’ in Baghdad where they are given no legal representation, and no opportunity to present mitigating evidence. The likely fate of their children is as yet unknown.

There is also evidence that the Kurds have been delivering at least some of the foreign ISIS women to these kangaroo courts in Baghdad, such as the young Frenchwoman Djamila Boutoutao:

She was captured by the Kurdish peshmerga in northern Iraq and eventually sent to Baghdad …. Up to 1,000 women accused of belonging to Isis were rounded up from the ruins of Iraq’s towns and cities and are now being held in Baghdad to face a reckoning from a society and government that remains deeply scarred by the past four years, with much of their anger directed at foreign fighters and their families. Up to 820 infants accompany the women, with some others yet to be born.

The proceedings [have] had a sense of urgency, and so did the 10-minute hearings in Baghdad’s central criminal court that have summarily dispensed with the accused foreign women, sentencing more than 40 to death, and dozens more to life in prison since the so-called caliphate crumbled.

Ironically, successive New Zealand governments have chosen to spend tens of millions of dollars to provide military training to the same Iraqi government that’s now engaged in these manifestly inadequate trials and the dishing out of executions, arbitrary life sentences and family separations. Could New Zealand citizens be also among those in the dock? We don’t seem to want to know. For all of its talk about supporting human rights and a rules-based international order, the Ardern government appears unwilling to exert itself.

It seems reluctant for instance, to ask our military leadership currently inside Iraq to make enquiries of the Iraqi government, or to spend a few extra dollars to find out whether New Zealand citizens are at risk of receiving this kind of judicial treatment. And if they are, to ensure they receive some level of legal representation.

Near the end of the excellent Wild Combination documentary about the musician Arthur Russell (1951-1992) his mother wonders what her son might have accomplished if AIDS hadn’t taken him so young. To which his father adds, endearingly, that maybe there would have just been even more unfinished tapes left behind. Certainly, the seemingly endless flow of out-takes from the archives of this massively influential cellist/electronic experimentalist/EDM and indie rock cult figure continues, unabated. This month, a compilation by Devendra Banhart includes this gem of Russell and his cello, as he experiments with mood and melody in his usual elliptic fashion:

It is not as if Russell never finished anything, although the output released during his lifetime was pretty much limited to a few ‘mutant disco’ singles, and to the World of Echo experimental album that he recorded in fits and starts between 1980 and 1986. That above track was among the contenders for inclusion on World of Echo and it feels like something of a rough draft for the better known and equally wonderful “Keeping Up”…a track that’s boosted significantly by the presence of Jennifer Warnes as a vocal foil for Russell.