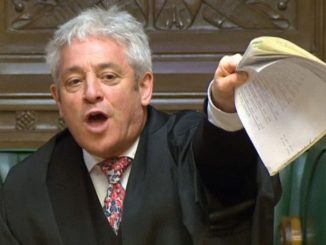 Just when we thought the Brexit mess couldn’t get any messier, it suddenly has. For months and months, UK Prime Minister Theresa May has been playing a lethal game of chicken with the British Parliament. Accept my wretched deal, she has been repeatedly saying to parliamentarians or (a) watch Britain go off the cliff into a ‘no deal’ chasm or (b) face losing Brexit altogether, via an EU-granted extension of the article 50 exit date that could be so very, very long as to be indefinite…

Needless to say, those have never been the only options open to May, but – for personal and party political advantage – these have been the only ones she’s been prepared to consider. Yesterday, and to everyone’s consternation, the UK Speaker John Bercow stopped May’s noxious blackmailing of Parliament in its tracks, temporarily at least. Drawing on precedent stretching all the back to 1604, Bercow ruled that May could not bring her deal back into the House yet again in this parliamentary session, unless its substance has been changed.

After all, May’s deal had been resoundingly rejected twice by the House in recent months. Moreover, the ‘no repeat vote’ principle had been flagged only last week in an eloquent, brief but little-noticed-at-the-time speech by Labour MP Chris Bryant, available here in Hansard if you scroll all the way down to column 614.

Evidently, Bercow had noticed it.

What will No 10 now do? The nuclear option would be to dissolve Parliament, launch a new parliamentary session and put the deal back on the table again. That ruse had been tried successfully once before, by the Attlee government in 1949. For now, Number 10 and its advisers are contesting Bercow’s ruling on the shaky grounds that circumstances have changed since the last defeat – eg the House has since voted against a “no deal Brexit, and also voted to request an article 50 time extension – and surely, these measures have transformed perceptions of May’s deal sufficiently to allow the same deal to come back a third time. Well, they would say that, wouldn’t they.

A response that’s more likely to succeed could involve making changes to the deal substantial enough as to gain Bercow’s approval for a third vote (aka MV3) to proceed. There’s a very useful flow chart here that sets out all the various ways in which Brexit might unfold from this point.

May has headed off to Europe again, but – at this point – the government is not revealing how long an article 50 time extension it will be seeking. A short one (three months) would make the hard Brexiters more happy, and a longer one would be a harder sell for May. For that reason, she might bring that long time extension back from Brussels as a weapon to – once again – try and beat Parliament into submission by forcing MPs to vote to delay and deny Brexit. In itself, a time extension otherwise seems pointless. Given how long it has already taken for Britain not to make any headway on what it wants to do, what useful purpose would be served by kicking the can further down the road? As one EU bureaucrat said about granting an extension – “ To do what?”

To summarise: the May deal is the only deal that the EU is offering. Parliament has rejected it twice, by large margins. The original Brexit referendum was not binding, and as passed narrowly on grounds and with expectations that have since been shown to have little basis in reality. Brexit has already done serious harm to Britain, and is set to do far more damage. There is no version of Brexit that realistically delivers a better outcome than what Britain gets by being in the EU.

Problem being… from the moment she angled for the top job, May has been a divisive opportunist, not a leader. She was a Remainer who did little campaigning on its behalf during the run-up to the referendum, and then became a hard Brexiter to mollify her loony fringe – remember her claim that ‘no deal is better than a bad deal ”? – before rebranding herself in early 2018 as a centrist, and negotiating a deal that even some of her own senior colleagues have said publicly will be worse for Britain than staying in the EU. That’s the deal Parliament has rejected twice, and that she could well finally succeed in ramming down Britain’s throat, if only because so many Britons will have finally succumbed to Brexit fatigue.

Trump in the US, Theresa May in the UK. Such bad luck for the West to have this duo in office, simultaneously. This article ponders what might have been:

How different all this might have been under a wiser, cleverer, more empathic and perceptive leader. She could have reached out from her first day to try to heal the great gash in the country caused by David Cameron’s reckless referendum. Imagine if she had called a national council, a Speaker’s conference or a commission of all parties and interests, with citizens’ assemblies to lay out what was actually possible and what was fantastical nonsense in ways forward. But that is a unicorn wish: she is what she is. The country fell into the hands of someone only capable of making a very bad situation infinitely worse.

The media coverage of the Christchurch tragedy has generally been respectful and informative. But as with any such event, there’s a point reached where the available angles begin to be exhausted. To fill space in the news cycle, there’s a temptation then to simply rehash the horror.

That point was well and truly reached in this RNZ exchange this morning.

The person being interviewed had just explained that he’d started watching the video footage before realizing what it was, and couldn’t put his phone down. “Some of the things are still with me, and are quite terrifying.” After a brief digression about the mosque itself, the RNZ presenter then came back with this incredible question: “I’m just going to ask you one more thing about the footage, and I know it is really hard and I’m really sorry to have to ask it – but what is it that has stayed with you about the footage?”

To his credit, the interviewee responded with dignity that it was just the things the shooter did to people “without wanting to be too graphic”. That, and the way the shooter had treated the community’s faith haven, had sickened him.

Bernie, Joe and the Rest

Talking of leadership, this Atlantic article by Ron Brownstein has some interesting observations about the race for the Democratic presidential nomination. Brownstein points to the youthful skew of most of the contenders as reflected in their ages (Beto O’Rourke, Kamala Harris, Cory Brooker) and/or in the radicalism of their policy positions, as with Bernie Sanders and Elizabeth Warren. Yet as Brownstein also points out, there’s a chasm opening up between that youthful outlook and the fact that the majority of the Democratic primary voters selecting the candidate will be 45 +, and seem far more moderate/conservative in their attitudes.

This explains why the yet to be announced candidacy of Joe Biden has been polling so highly, and is doing lopsidedly well among older voters. So… there’s potential for a serious generational tug of war within the Democratic Party, and among voters seeking either/both a younger candidate and more radical solutions.

At this point, NPR is the only outlet streaming the Miss Universe debut album by the gifted 23 year old British-based singer/writer Nilüfer Yanya. The link is here…

So far, three cuts from the album are widely available: “Tears”, “Heavyweight Champion of the Year” and “In Your Head”. Here’s “Tears”… which conveys some of her idiosyncratic talent:

And from days gone by in 2017, here’s a long time favourite: