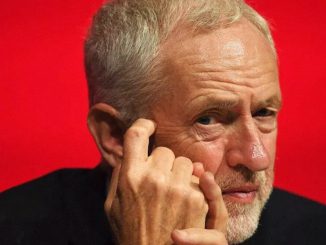 WTF? The resignation of seven UK Labour MPs in protest against the leadership of Jeremy Corbyn is another example of the centre-left’s readiness to sabotage its own cause – such things are always allegedly done on principle – even if the outcome hands the country over to Conservative rule for five more years. Certainly, a technician hot-miked at the splitters’ press conference was pretty sure this would now be the outcome, and he accidentally informed the nation to that effect.

Kind of incredible. Only two years ago, Corbyn and his supporters had led Labour out of the electoral wilderness to the very brink of victory, and in the process they put this sorry bunch back into Parliament with increased majorities.

Over Brexit, Corbyn has (for someone alleged to be so tactically inept) played a long game whereby he has kept the spotlight where it belongs – namely, on the failure of Theresa May and her government to govern in the nation’s best interests, rather than simply in her own party’s self-interest. I don’t mean to go all Russian Doll on you with the alternative universe timelines, but if Corbyn had bowed to his critics late last year and campaigned openly for a second referendum, Labour’s intervention into the Brexit process would have become THE media story overnight. May would escaped blame in the subsequent melee.

If he’d taken that course, Corbyn would now be being damned for (a) arrogantly ignoring the 2016 referendum outcome, and (b) single-handedly re-invigorating UKIP as a political force in northern England. Until yesterday, he had avoided the traps being set for him. All Labour had to do was to be patient for another four weeks, and ensure that the Conservatives got to wear their failure to govern. Instead, the seven rebel Labour MPs have rescued Theresa May, and thrown her a lifeline. It would be surprising if the Tories were not now planning for a snap election to capitalise on Labour disunity.

The seven self-declared independents all come from the right wing of the Labour Party. One of them (Angela Smith) is reportedly in favour of water privatisation. According to the rebels, anti-semitism is rife within Labour, although the evidence gathered this week by the BBC looks like pretty thin stuff.

Five of the seven rebels belong to the Labour Friends of Israel group chaired by rebel MP Luciana Berger. While one has to assume their views are sincere, any criticism at all by Labour of the actions of the state of Israel (in say, Gaza) had risked being classified as anti-Semitism. No doubt, Berger has been subjected to some vile racial abuse over the course of her long-running criticism of Corbyn. Unfortunately, that’s the nature of virulent Internet discourse as much as it is evidence of anti-Semitism being rife within the Labour leadership. (Over on the centre-right of course, Ukip and its Tory allies have their own long history of anti-Semitism.) In any case… within hours yesterday, the rebel group’s moral stand against racism had been dented by rebel MP Angela Smith referring to people from black, Asian and minority ethnic backgrounds as having a “funny tinge”.

According to the somewhat less than magnificent seven, UK Labour under Corbyn has become a dictatorship that promotes socialist ideas that lie well to the left of the views of the British public. This is arguable. There is some research evidence that the British public is actually more left wing than the main political parties commonly suppose.

No doubt, there is a widely held view that a large bloc of moderate voters would run away in fear from any politician promoting radical left wing policies, and on a daily basis, the mainstream media commentariat certainly does its bit to re-inforce the wisdom of moderation in all things. The shaky evidence for such beliefs was discussed by Paul Krugman in one of his recent NYT columns, before he concluded:

So what are the effects of this delusion of America as a center-right nation? It has clearly inhibited Democrats from taking bold policy positions, out of fear that they’ll be too far left for voters — a fear fed by journalists who keep insisting that the public wants centrists who are somewhere between the parties.

In fact, how on earth do the Labour rebels think that Corbyn succeeded in closing the gap on Theresa May two years ago? It certainly wasn’t by offering voters a moderate, warmed over plate of Blairite economics as the only alternative to Tory rule.

Supposedly, the Corbyn reluctance to campaign for a second referendum was not because such a campaign would have been welcomed by the Tories with open arms, but because Corbyn is a closet Brexiteer. Undoubtedly, Corbyn has more misgivings about how the European Union has been run (eg to the prime benefit of the German economy) than the reported 80% of young Labour supporters who are Remainers. Arguably though, and thanks largely to yesterday’s rebellion, the Remain cause has now been set back even further.

So why did the rebels do it? Here’s the take by Guy Rundle on the Aussie website Crikey:

Unsurprisingly, [the rebels] commitment to a “new politics” that represents “the people”, didn’t extend to resigning and then re-contesting their seats at by-elections. “By-elections are the last thing the British people need now,” [rebel MP] Mike Gapes, an Iraq war hawk noted. Well, the last thing that seven British people need. Their sudden enthusiasm for the difficult but resolute path of independence, blah blah, may be not unrelated to the moves to de-select them by Momentum, the pro-Corbyn group that exists both inside and outside the party.

So rather than run the risk of being democratically de-selected, the rebels chose to inflict as much damage on Labour as they could, on their way out. Goodbye, and good riddance.

Footnote One: Rebel MP Mike Gapes not only voted for the Iraq invasion but also claimed that the Chilcott inquiry (into how Britain became involved in Iraq) should not be funded, or published, or read.

Footnote Two: Commentators are already likening this split to the formation of the Social Democrats in Britain during the early 1980s. Yet as many have also pointed out, three of the four splitters from Labour in 1981 were party heavyweights with Cabinet experience and at its launch that new party was being greeted with approval ratings up in the mid 20s. Ultimately, their main achievement was to split Labour comprehensively, and thereby handed Margaret Thatcher an overwhelming victory in the 1982 elections. As Crikey also noted yesterday, the Social Democrats had vanished within six years into a merger with the Liberals. Yeats pointed it out long ago: the centre cannot hold. Things fall apart.

In line with this week’s media-generated flap about the state of our relations with China, I’d just like to know what Winston Peters has been doing lately about this scary recent headline from the South China Morning Post.

Hmmm. So “China’s brightest children are being recruited to build AI killer bots” within a secret weapons development facility. As one SCMP commenter noted at the time, we’ve reached the point where the news bulletins are starting to sound exactly like a pitch for a new Netflix television series.

Finally… yesterday, I linked to a fine track by the late, great country singer Dawn Sears called “Don’t Take Your Hands Off My Heart”. Well, here’s a classic passive/aggressive leaving song that probably bears no relationship whatsoever to the fury that the UK Labour Party leadership must be feeling right now. It features Sears again, doing her own defiant interpretation of the Vern Gosdin weepie “If You’re Going To Do Me Wrong, Do It Right”. In Sears’ hands, the song comes across as dignified contempt, rather than masochism. Also, she makes her powerful vocal seem effortless. What a talent, what a loss.

Talking of country, Kacey Musgraves has become the favourite country singer of people who usually don’t like the genre at all. (Thirty years ago, Nanci Griffiths filled much the same niche. Lucinda Williams did much the same in the 1990s.) Musgraves deservedly picked up another Grammy this month… and while any number of cuts convey her sly humour and irreverence (“Follow Your Arrow”, “Merry Go Round”) I’ve always liked this beautifully calibrated song about the value of a casual relationship that knows its limits: