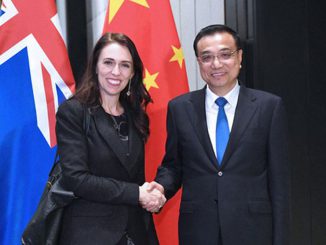 If New Zealand’s relations with China are ‘deteriorating’ then you still need a microscope to detect the signs. Yes, maybe PM Jacinda Ardern might have fallen behind Japanese PM Shinzo Abe on the priority list last year for a state visit, but maybe she always would have been outranked by the leader of the world’s third biggest economy. Hmmm. Maybe the ratio of goods having customs problems at the Chinese border had risen from a miniscule .26% of imports to a tiny .29 % of imports in the year to January 2019. At the same time though, China has merged its border control agencies. It could just be internal bureaucratic teething problems.

Maybe the Chinese have postponed a tourism seminar, but then again, Chinese tourism numbers are up. Maybe an Air NZ plane failed to have cleared the necessary administrative paperwork and had to turn back to base but maybe that screw-up was purely its own fault. Maybe some – of none – of this was Chinese trade retaliation for New Zealand’s raising of security concerns as a trade barrier against the Chinese firm Huawei, to prevent its involvement in our upcoming 5G telco networks.

Despite the thinness of the evidence of “deterioration” the media has seemed helbent on inflating this into a political crisis. Yesterday, this caption from Stuff seemed worthy of inclusion in any journalism classes in future, as a classic example of a media beat up:

The Government is moving to reclaim the story on China, as speculation about a rift appears to be gaining momentum – fueling fears it could make the situation worse.

Note: it is the “speculation about a rift” that is gaining momentum, not the evidence that any such rift actually exists. And government response will only “be fueling fears” in a “situation” (aka the beat – up) where things could get worse. Indeed they could, if our media have anything to do with it.

In other Western countries where relations with China are deteriorating, the evidence of a rift is far easier to see. For example: at the end of a long series of tit for tat measures and diplomatic insults, China announced in late November an anti-dumping probe into its imports of Australian barley. Here’s what a real pattern of deterioration looks like:

What appears the more likely explanation for China’s surprise announcement is that Beijing is angered by Canberra’s strategic undertakings in the South Pacific, and has meted out economic retaliation in response. Australia’s agricultural commodities are simply a pawn in the competition for strategic influence in the South Pacific. This follows after Canberra confronted China over what is seen as Beijing’s policy of interfering in Australia’s domestic politics and regional self-defined sphere of influence.

In January, the tit for tat continued. Reportedly, Australia has cancelled the residency application of a billionaire Chinese political donor and ‘influence agent’, and blocked him from returning to his $US14 million Sydney mansion. Famously, Canada has arrested a top Huawei executive on a US extradition warrant, and China has retaliated in kind:

While Beijing formally denies any connection, the arrest of two Canadians on vague national security charges and the re-sentencing of a convicted Canadian drug smuggler to death on Monday point to a determined campaign of intimidation and retribution.

Routinely, the Chinese play hardball on such occasions:

The actions fit a pattern of retaliation against nations that offend China, which sometimes extends to their citizens inside the country. Past instances have shown China willing to endure long freezes in relations and subsequent damage to its national image.

With that historical pattern of behaviour in mind, the barely detectable responses by China towards New Zealand (that may be, could be, speculatively linked by the media to our complicity with the trade ban on Huawei) looks more like – if it is anything at all – an uncharacteristic example of a ‘kid gloves’ approach by Beijing to a New Zealand that it seems to treat quite favourably, especially when compared to the state of Beijing’s relations with the other members of the 5 Eyes security alliance : Australia, Canada, the UK and the US. Despite the Huawei interim decision, we continue to act and continue to be treated, as the friendliest face in that club.

Huawei as a trade issue

This week, reports from the UK have indicated that any security threat from Huawei in the 5G context can be managed – and that, on balance, there is more to be gained from retaining access to Huawei’s expertise and low cost structures. As the Australian journalist Bernard Keane had previously pointed out:

“It’s always always amusing hearing Western governments complain about Chinese mass surveillance given the constant visual surveillance they place their own citizens under.”

The US has an obvious commercial interest in Silicon Valley getting the main global contracts for 5G networks, and not China’s cutting edge digital rival, Huawei. It would also be naïve to think the US would not invoke security concerns as a trade barrier to achieve that end. Arguably, the US problem with Huawei is not that it would carry out surveillance – as the UK report concedes, there is no evidence that Huawei has ever done so – but that it would deny the NSA the easy access for surveillance purposes that compliant US tech firms would deliver to Langley. Moreover, as the Techdirt site suggests, the modest but important advances that 5G will deliver are also being wildly overstated, mainly for marketing purposes, but also to get rid of the existing regulatory constraints:

…..Carriers have been trying to pass the technology off as the next industrial revolution and some kind of deus ex machina. Not just because they want to sell product, but because they’re using it as a regulatory carrot on a stick, claiming that unless you give Big Telecom “X” (X=less oversight, more subsidies, merger approval, the death of net neutrality), America will somehow fall behind an arbitrary measurement they’ve entirely pulled out of their collective ass.

To that same end, banning Huawei does seem as much about trade protectionism (the US also invoked ‘security concerns’ when applying its steel and aluminium tariffs) as it is about the existence of genuine security problems. Thankfully, the UK has now shown us a managed way out of the stark choice – the US or China? – that we had found ourselves facing over the unrolling of 5G networks in this country. On cost and expertise grounds, Huawei seem to be very competitive and any risks it poses can apparently be managed, cost effectively. Hey, maybe we should just let the free market decide this one.

If there is a current credibility gap over China it would have to be around the positions being taken by National leader Simon Bridges. If the government’s Huawei decision is the root cause of the alleged “deterioration” in relations, does anyone seriously think that a National government would have defied our 5 Eyes partners over the Huawei trade ban? Hardly. Like the coalition government, Bridges would have (a) made the same interim decision to exclude Huawei from the 5G networks and (b) also tried to limit the diplomatic fallout from that decision. As in many other areas of foreign policy, the differences between the two major parties on China policy are miniscule to non-existent.

The toughening stance towards China evident in last year’s Strategic Defence Policy Review (mainly triggered by China’s aggressive actions in the South China Sea and by its cheque book diplomacy in the Pacific) has been attributed by National to the undue influence of New Zealand First within the coalition government. Bridges has been particularly critical of Foreign Minister Winston Peters.

Yet again, the mild reset contained in the defence policy review has simply made us more consistent with those traditional allies (eg Australia) that National normally supports. Oddly enough, it had been a National government that in headlong pursuit of trade favours, had cast defence policy to the winds when in was last in government. In his 2015 speech in Beijing for instance, then-Defence Minister Gerry Brownlee actually floated the notion that our defence relationships with China and the US were not mutually exclusive:

“We do not expect the South Pacific will face an external military threat. ” Brownlee also called China a “strategic partner” and lavishly praised our “Five Year Engagement Plan with the Peoples’ Liberation Army.” In that same speech, Brownlee tiptoed around the South China Sea issue, calling on “all claimant states to take steps to reduce tensions” within the framework of international law. No blame being levelled there, no sides taken. Interestingly, Brownlee also said: “We do not see our defence relationships with the United States and China as mutually exclusive.” Meaning… don’t count New Zealand anymore as being (only) in the Western military club, alongside the Americans and Australians.

The Chinese, it seems, [were] now being viewed by the Key government as being our military allies, as well as our partners in trade. As Brownlee put it this week at the White Paper press conference, the old paradigms no longer apply: “Those old type allegiances, alliances, you know a good guy, a bad guy – I don’t think they’re as clearly stated [now] as they were.”

These were interesting ideas, and it was very unusual for a centre-right National government to be espousing them. Frankly, if the Ardern government floated ideas like the ones that Brownlee was raising in 2015, there would be howling from the National benches that the socialists in power were abandoning our traditional allies, cozying up to the Commies and betraying the spirit of ANZAC. At some time before the 2020 election, Bridges needs to clarify whether his defence policy stance is (like Peters) more in line with our traditional allies, or more like his party’s previous stance, where the Pacific had no good guys or bad guys and National was putting China on a virtual equal footing in future with the US, as a defence partner.

The recent slew of tributes (Grammys etc) being paid Dolly Parton almost make you want to seek re-assurances about her current state of health, but otherwise… there are few performers so deserving. Or influential. This country track by the late Dawn Sears (she died of lung cancer in 2014) is a case in point of just how influential Parton’s vocal style and emotional directness has been:

And here’s Dolly Parton herself, with a fine track from her late career swing away from pop and back towards bluegrass, that she made in the late 1990s :