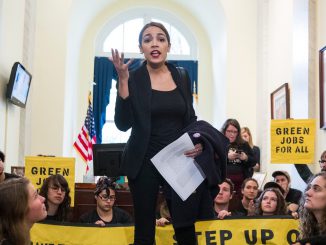 During his recent State of the Union address, US President Donald Trump’s ringingly declared to his fellow Americans that “We will never be a socialist country!” To which someone online added the sarcastic sub-head: ‘Except for public education, public transportation, fire departments, police departments, public libraries, every branch of the US military, roads and highways, Social Security, Medicare/Medicaid, public prisons and jails, public hospitals, the Veterans Affairs administration, public universities, public parks…’ and so on.

Point being, ‘socialism’ is more of a political scare word than an objective condition. Even in the US, as Nate Silver’s 538 website pointed out this week there is polling evidence that modern Americans are inclined to treat socialism as meaning ‘equality’ rather than the ‘government ownership or control’ that Americans understood the term to mean back in the 1940s. That’s progress, I guess. However, it still won’t stop the Republicans from painting Nancy Pelosi as some latter day version of Rosa Luxembourg.

Heading towards the 2020 elections, they need these kind of scary distractions because – like the National Party here – the Republicans can’t really run on their record in office. As this article says, the American public is being told to feel very afraid of the Attack of the Undocumented Migrant and the Creature From The Socialist Lagoon.

In 2019, the most coherent action plan for the socialist menace is the Green New Deal (GND) launched a few weeks ago by the Democratic Party’s rising congressional star, Alexandria Ocasio-Cortez. The GND consists of an ambitious environmental policy and jobs programme, but it also – and this is its really controversial aspect – would pursue those overtly ‘green’ goals in tandem with a social justice expansion of access to income support, quality healthcare and education. And quelle horreur, the GND seems entirely OK about running deficits if that’s what is needed to achieve those goals. The Republicans profess themselves to be shocked, shocked. Hey, it was OK by them last year to plunge the economy into massive future deficits in order to fund tax cuts for the rich – but to achieve social goals? That’s (a) communism and (b) utterly unaffordable!

Even the saner critics of Ocasio- Cortez – such as Noah Smith of Bloomberg News – recognize the good ideas contained in the GND:

The Green New Deal would retrofit all American buildings and factories to be carbon-neutral, electrify all transportation, and switch the entire electrical grid to carbon-neutral energy sources. These goals are highly ambitious, but they’re good targets. Ocasio-Cortez’s plan correctly recognizes that carbon taxes wouldn’t be enough to prompt private companies to do all these things on their own, and that large-scale government-funded infrastructure is required. Furthermore, a focus on scaling up clean energy would push the technology forward. That would help other countries — where most of the world’s carbon emissions are produced — to follow in the U.S’s footsteps.

Smith’s beef is with the social programme that goes with it, or rather its likely cost, judging by the FAQ that accompanied the GND release. The FAQ fine print promised:

1. “a job with family-sustaining wages, family and medical leave, vacations, and retirement security”
2. “high-quality education, including higher education and trade schools”
3. “high-quality health care”
4. “safe, affordable, adequate housing”
5. “economic security to all who are unable or unwilling to work”

This plan, Smith estimated, appears to combine a federal job guarantee, free college and single-payer health care. “Depending on how one interprets the guarantee of “economic security” to all those who are “unwilling to work,” it might also include a universal basic income…” If so, then it would cost tens of trillions for the entire package. To his credit, Smith has also tried to come up with a more conventional, less ambitious (ie blue/green version) of the GND master plan.

Affordability is course, a problem that exists solely for the centre-left. The left is always rigorously held accountable for any perceived deviation from the economic norms set in stone 30 years ago. The centre right, on the other hand, is free to kick the can down the road and live in denial about the mounting social costs it not only neglects to count, but prides itself on ignoring if this allows it to balance the books. It may be economic orthodoxy, but it looks a lot more like social bankruptcy.

What Ocasio-Cortez has done instead is to bring the achievable environmental goals and the aspirational social goals out of the darkness, and put them up on the table alongside the centre-right’s mania for tax cuts. She will be asking her party – first of all – to sign onto this vision, and then select the presidential candidate best able to credibly promote it to the American voter in 2020. There’s a lot at stake, and only the left is willing to tackle the problems right in front of us:

For decades, the Right has claimed the language of freedom. But their vision of freedom as your right as an individual to do whatever you want — so long as you can pay for it — is a recipe for disaster in the twenty-first century, when it’s clearer than ever that all our fates are bound up together. Freedom has to mean something more than the capitalist’s freedom to invest or the consumer’s freedom to buy.

Currently, the field of candidates for the Democratic Party presidential nomination is crowded, yet no more so than the Republican field at the same point last time around. For what it is worth at this stage, former vice-president Joseph Biden is currently polling as the frontrunner, despite well-known flaws as a candidate which include (a) his reputation for making campaign trail gaffes (b) the extensive and creepy online footage [it’s on Youtube] of him fondling the women and kids sharing a public stage with him and (c) his championing of the Bill Clinton-era ‘tough on crime’ sentencing and imprisonment policies that continue to blight black communities.

Biden is not the only presidential candidate with problems. Massachusetts senator Elizabeth Warren continues to be haunted by her prior claims to Native American ancestry. In the past, Warren insisted that she neither sought nor received special treatment for what DNA testing has since shown to be only a 1/64 level of Native American ancestry. Yet the Washington Post recently unearthed a mid-1980s registration application for the State Bar of Texas on which Warren described her race in her own handwriting as being “American Indian”. Trump’s Pocahontas jibes at Warren will not be going away anytime soon.

Inevitably, different answers accrue when the question is (a) what candidate best represents the mood of the Democratic Party as opposed to (b) which candidate has the best chance of beating Donald Trump? For all of Nancy Pelosi’s skill at needling Trump and resisting the damaging parts of his agenda, there is a good reason why the activist wing of the party originally had doubts about her appointment as Speaker. Divisions exist in any political party but… in the coming months the House Democrats (and party at large) will have to decide where they stand on legislation meant to curtail the boycott movement against Israel and also (under another bill) on accepting campaign financing from corporate Political Action Committees (PACs). Currently, Pelosi supports both measures. Party progressives do not. It could get messy.

Back in August 2018, Werewolf picked the Minnesota senator Amy Klobuchar as being the centrist “unifying” candidate that Trump would find hardest to caricature, and defeat.

As a mid-westerner, she could also get off to a flying start in the initial Iowa caucuses next year. Last week, Klobuchar formally declared her candidacy, amid a rash of negative stories about her being a tough and demanding boss, with a high staff turnover. It is hard to imagine such traits being a disqualifier for a male candidate, but it could detract from her ability to attract quality people (and volunteers) to her campaign. Ironically, Klobuchar may find it easier to unite the country behind her, than her own party.

For once, the Grammys did something right. The lamest music show in history somehow this year enabled Annie Clarke aka St Vincent and Dua Lipa to steam up proceedings during a mashup of St Vincent’s “Masseduction” song, and Lipa’s “One Kiss” single. Lyrically apt, to boot. In more typically clueless Grammys fashion, the most streamed woman in Britain during 2017 somehow (in 2019) got given the industry’s “Best New Artist” award. Great clip, though: