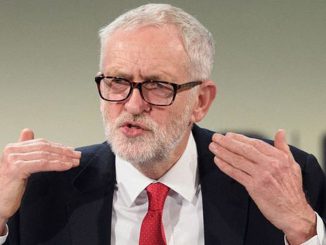 Fear has become such a routine part of the political toolkit that it hardly gets noticed anymore, for what it is. For 15 years or so for instance, the prospect of the Greens being in government was portrayed as a sure path to ruin – those crazy Greens! And yet here we are a year on, and New Zealand seems to have come through relatively unscathed from this first experience of the Greens holding down major ministerial portfolios. At this rate, voters may even start to query the One True Faith that only the National Party knows how to run a modern economy…

What do you call a situation where the state tries to create panic among its own people for party political gain? As practiced by Theresa May and her faction of the Conservative Party, this has become a well-honed form of state terrorism. Currently, British politics are being driven so thoroughly by the fear principle that you have to wonder whether this can really be the same nation that pluckily survived The Blitz. Fear of migrants gave us Brexit. Since then, ending the free flow of people has been the one red line that May has refused to surrender, no matter what harm this does to the hopes and opportunities of generations of Britain’s youth, the majority of whom embrace Europe without the fear and loathing being displayed by their parents. Similarly, only young fogeys and old Tories fear Jeremy Corbyn, the British right’s current boogey man.

Essentially, Corbyn has been cast in the same scary role in which May’s predecessor David Cameron had cast Corbyn’s own predecessor Ed Milliband, just before the 2015 election:

Britain faces a simple and inescapable choice – stability and strong Government with me, or chaos with Ed Miliband

So it goes. Certainly, May has been working overtime at weaving Corbyn into the fear scenarios she’s been peddling in the run- up to the parliamentary Brexit vote on January 14. If you believe May (the same politician who once claimed that a ‘no deal’ Brexit was preferable to a ‘bad deal’ Brexit) pressure now needs to be brought on every MP in Westminster to vote for her wretched Brexit deal next week lest (a) a dreaded ‘no deal’ eventuate which would (b) cause catastrophic chaos across Britain and (c) render a dreaded second Brexit vote more likely and perhaps even (d) trigger a general election that would hand power to Corbyn and his slavering socialist hordes.

Meaning: if the Tories want to stay in power, they need to thoroughly terrify the British public about every single alternative to May’s terrible, no good, very bad deal. Over Christmas and New Year, the fear machine was working overtime to that end, pumping out any number of “no deal” nightmare scenarios. The ministerial planning for which – eg hiring a ferry company with no ferries that seems to have copied its contractual terms and conditions from a pizza delivery service – has been less than stellar.

To his credit, Corbyn has (so far) refused to be baited into making Labour the media story in the run up to the parliamentary vote, which is due on either January 14 or 15. In his recent statements on Brexit, Corbyn has adroitly kept the focus on what May can and should be doing, not on what Labour might do, or should do, sometime in future. The time for Labour to show its hand will come later, after May has finally run out of options. A controversial statement on Brexit by Corbyn at this point would be the answer to May’s prayers. What we do know is that if Corbyn backed May and her deal in the mid January parliamentary vote, Labour would be finished. The young who have flocked to Corbyn would desert him in droves.

[The poll] indicates Labour’s share of the vote would slump another eight points – from 34 per cent to 26 per cent – if its MPs join with the Tories to support the prime minister’s Brexit deal. This would be even worse than the 28 per cent share secured by Labour under Michael Foot, when the party slumped to defeat against Margaret Thatcher’s Tories in 1983.

Despite his own personal animosity to the EU as a neo-liberal project, Corbyn is smart enough to see that it would be politically suicidal to endorse or enable May’s Brexit deal. The reality is that Brexit in the form that was promised to the British public at the 2016 referendum, has proved to be undeliverable. Over the next fortnight in particular, Corbyn will need to ignore his less patient critics inside Labour, and ensure that it is Theresa May and her wretched government who wears the consequences.

Footnote : For any party in Opposition it is a tactical necessity to avoid being painted as the feared alternative that stampedes the public back into the arms of a government that has consistently failed them. In 2014, New Zealand held an election fought almost entirely on the fear of a divided Opposition, rather than on any meaningful scrutiny of the government’s (lack of) achievements. Well, after nine years of absentee government, we finally have a government willing to do its job. This is not something to be afraid of, no matter how timidly our business sector chooses to react to the very thought of change.

Footnote Two: Across the Atlantic, the entire Trump political project has been based on the tactics of fear and division. Over the past week Trump has suggested (a) that the current shutdown of the US government over funding for his border wall could extend for months or years and (b) that he might declare the funding for the wall comprises a ‘national emergency’ such that he can order it funded and built by presidential decree.

Actually, no. He really can’t do that, as the New York Times usefully pointed out last week. For the past 150 years, US law has severely constrained presidential emergency powers, and generally forbidden the use of the military to achieve the agendas of civilian politicians.

Ultimately, any White House aides – or military personnel – could be committing a federal crime punishable by two years in jail if they obeyed or assisted any presidential order to get that border wall built. That’s assuming any such presidential order wasn’t immediately struck down by the courts. Meanwhile, the government shutdown rolls on. As a friend recently pointed out on Twitter, how did we get from “Mexico will pay for the wall” to “ We will refuse to pay US government employees until the US public pays for the wall….”

Come mid-March, US singer/writer/guitarist Lindsey Jordan and her band Snail Mail will be playing gigs in New Zealand. (Caroline Bar in Wellington on 14 March, be there.) The breakthrough Snail Mail single “ Thinning” happened while Jordan was still in high school but now at the age of 19, she’s an industry veteran ; even though she still lives in Baltimore with her parents. Here’s the band’s recent single “Pristina…”

And here’s where Snail Mail started out with “Thinning” – which beautifully marries Jordan’s plaintive voice and guitar with a hankering to be purposefully aimless:

Hot head and dreamless sleep / I could just slip down And on the wrong track, I gotta get back/ I wanna spend the entire year just face down and on my own time / I wanna waste mine / And spend the rest of it asking myself “Is this who you are?”