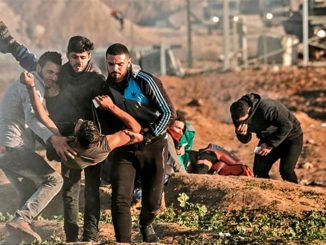 The past month has devoted a lot of space to the best music and films of 2018, and far less to the past year’s human rights violations. The under-reporting on the ongoing carnage in Gaza has been a case in point. As of 12 January 2019, some 241 Palestinians have reportedly been killed in the protests along the Gaza fence that began last March. The grotesque disproportionality in the casualty figures – 241 Palestinians, two Israelis – has been striking:

The demonstrators are calling for the lifting of an Israeli-Egyptian blockade imposed on Gaza for over a decade and for the right to return to their ancestral homes in Israel, as stipulated in UN Resolution 194. Most of the Palestinians killed during the demonstrations were shot in weekly clashes, but others have been hit by Israeli tank fire or air raids. Two Israeli soldiers have been killed over the same period, one by a Palestinian sniper and another during an aborted special forces operation in Gaza.

As Human Rights Watch reported last June, the Israeli use of live ammunition in response to the Gaza protests is an excessive use of force, and constitutes an apparent war crime:

The shootings… show a pattern of Israeli forces shooting people who posed no imminent threat to life with live ammunition… Six of the witnesses Human Rights Watch interviewed said they were 200 to 300 meters from the two parallel fences, that in most places separate Gaza’s eastern periphery and Israel, on May 14 when Israeli forces shot them or people close to them with live ammunition. The victims include journalists, civil defence workers, and volunteers trying to evacuate the wounded, and a child running away from the fences.

Three other witnesses said that soldiers shot them when they were between 30 and 40 metres from the fences. These three include a 14-year-old boy and a 48-year-old man, shot in separate incidents, who said they had not thrown stones or otherwise tried to harm Israeli soldiers. A third man said he had approached the fences and thrown stones at Israeli forces, but that he was shot later, while attempting to evacuate another man who was shot and wounded. The accounts are consistent with numerous news reports and videos that show Palestinians being shot while standing still or running away from the fences.

It is not as if the brutality with which the Gaza occupation is being enforced is some new thing. In fact, this Christmas/New Year period marks the tenth anniversary of Israel’s Operation Cast Lead offensive in Gaza. Again, the disproportionate casualty figures cited by Amnesty International speak volumes:

On 27 December 2008 Israel launched a major military offensive – nicknamed Operation ‘Cast Lead’ – in Gaza. It prevented the media and aid agencies from entering the area. In the following three weeks, the Israeli military killed at least 1,383 Palestinians, including 333 children. Palestinian armed groups killed thirteen Israelis, including three civilians, in rocket attacks on Southern Israel. [Other published estimates cite 1,417 Palestinians dead, 313 of them children.]

Operation Cast Lead was not an isolated offensive. As the Guardian recently reported:

[Operation Cast Lead] was followed by Operation Pillar of Defence in November 2012 and Operation Protective Edge in the summer of 2014. The fancy names given to these operations were fraudulent, dressing up offensive attacks on defenceless civilians and civilian infrastructure in the sanctimonious language of self-defence….UN secretary general Ban Ki-moon called the Israeli attack on 1 August 2014 on Rafah, in which a large number of civilians sheltering in UN schools were killed, “a moral outrage and a criminal act”. This description applies equally to Israel’s entire policy of waging war on the inmates of the Gaza prison.

The Israeli political and defence establishments have a term for their strategy of inflicting bouts of extreme violence on the population of Gaza. They call it “mowing the grass”.

Those who forlornly ask “when is this going to end?” and use the cliché “cycle of violence,” have psychological difficulties digesting the facts that there is no solution in sight and that the violent struggle against Hamas is not going to end any time soon (not as long as the enemy’s basic ideological motivations remain intact). But still, important periods of quiet are attainable by military action, and this is what explains Israel’s current offensive. The Israeli approach described here is substantively different from current Western strategic thinking on dealing with non-state military challenges. Western thinking is solution-oriented. This explains part of the lack of understanding for what Israel is doing.

Against an implacable, well-entrenched, non-state enemy like the Hamas, Israel simply needs to “mow the grass” once in a while in order to degrade enemy capabilities. A war of attrition against Hamas is probably Israel’s fate for the long term.

In a speech last year, Israeli Education Minister Naftali Bennett also used the ‘mow the grass” term for Israel’s military actions against the Palestinians in Gaza:

Bayit Yehudi leader Naftali Bennett implied on Tuesday that Israel must “mow the lawn” in Gaza, employing a common metaphor used in reference to stopping attacks on Israel from the Hamas-ruled strip. “In the media there is an acute dispute about two approaches—cutting all connection with the enemy or continuing contact and long-term security,” Bennett said in a speech delivered at the annual International Institute for Counter-Terrorism Conference in Herzliya.

“In our neighborhood, those who don’t mow the lawn, are mowed by the grass,” the Education Minister said at the opening of his remarks.

Such statements are indicative of a deliberate intent to use massive lethal force against civilians to ensure their submission. Implicitly, it also recognizes this submission is intolerable and so, therefore, regular “mowing” of the people of Gaza is required. Finally, here’s how the Guardian reported on the tenth anniversary of the Israeli offensive against Gaza:

It was not a war or even “asymmetric warfare” but a one-sided massacre. Israel had 13 dead; the Gazans had 1,417 dead, including 313 children, and more than 5,500 wounded. According to one estimate 83% of the casualties were civilians. Israel claimed to be acting in self-defence, protecting its civilians against Hamas rocket attacks. The evidence, however, points to a deliberate and punitive war of aggression. Israel had a diplomatic alternative, but it chose to ignore it and to resort to brute military force.

The diplomatic alternative had been put on the table:

In June 2008 Egypt had brokered a ceasefire between Israel and Hamas, the Islamic resistance movement that rules Gaza. The agreement called on both sides to cease hostilities and required Israel to gradually ease the illegal blockade it had imposed on the Gaza Strip in June 2007. This ceasefire worked remarkably well – until Israel violated it by a raid on 4 November in which six Hamas fighters were killed. The monthly average of rockets fired from Gaza on Israel fell from 179 in the first half of 2008 to three between June and October…

As many observers have noted, Israel is pursuing a form of state terrorism in Gaza, under the protective cover of the US Security Council veto at the UN:

The Israeli-Palestinian conflict is a political conflict to which there is no military solution. Yet Israel persists in shunning diplomacy and relying on brute military force – and not as a last resort but as a first resort. Force is the default setting. And there is a popular Israeli saying that goes with it: “If force doesn’t work, use more force!”

Given his track record, the new Israeli military chief of staff offers little hope such policies will ever change.

All credit to Canada for offering refuge to the Saudi teenager Rahaf Mohammed al-Qunun.

Lets hope that if al-Qunun should wish to marry sometime in future, she won’t need to go anywhere near the Saudi embassy in Ottawa for the paperwork. Similar attempts to escape have not ended so well. In 2017, 25 year old Dina Ali Lasloom was forcibly returned to Saudi Arabia by the Philippines after she tried to flee to Australia, and she has never been heard of again. Similarly, Israa al-Gongham, 29, has been in Saudi detention since 2015 and faces the death penalty for her non-violent human rights activities against the discrimination faced by the Shia minority.

She is charged with things including chanting “we shall not be humiliated,” and “we demand penalties for those who fired bullets,” according to a brief on the case written by international human rights lawyer Oliver Windridge, which was circulated by a group of U.S. and U.K. lawyers on Friday. Saudi Arabia’s Specialized Criminal Court was created to hear terrorism cases, but Windridge says “its focus appears to have moved from terrorist suspects to human rights defenders and anti-government protesters.”

All praise to al-Qunun then for choosing to escape from the Saudi hellhole, and to Canada, for offering her a safe place. Here’s a great song about her new home; it is a cover version of Buffy Saint-Marie’s original: