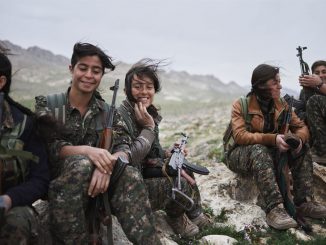 For the past 100 years, the West has sold out the Kurds over and over again. So much so that it came as a surprise yesterday when US National Security advisor John Bolton appeared to walk back the latest act of betrayal. Before Christmas, US President Donald Trump had got off the phone from talking with Turkish leader Recep Tayyip Erdogan to immediately announce that the US would be pulling its 2,000 troops out of Syria, thereby leaving America’s Kurdish allies in northern Syria to the tender mercies of Turkey’s military forces.

No matter that the Kurds had done the bulk of the fighting – and dying – over the past five years in the battle against Islamic State, thereby ensuring that precious American lives would not be lost. One of the main reasons the US did not have to put very many boots on the ground in Syria (or earlier, in clearing Islamic State out of the city of Mosul in northern Iraq) was because Kurdish fighters served as a very effective US proxy force. Thousands of them died in the process.

In northern Syria, the Kurds have established an effective form of self-government in a small region the Kurds call Rojava. None of that seems to have mattered. To Trump, the Kurds were disposable. Faced with a strongman like Erdogan, Trump did what he commonly does in the presence of raw power and went weak at the knees. Sure, he reportedly told Erdogan, the US troops serving as a buffer between the Kurds and the Turks would be withdrawn. Go get ‘em.

Thankfully, Bolton – who appears to be running US foreign policy almost singlehandedly – has stepped in and said that the US withdrawal will be delayed, and would be conditional on Turkish assurances that the safety of the Kurds will be assured.

Time will tell whether those delays in withdrawal – and the assurances by Turkey – are real, or merely a cosmetic gesture. For the Kurds in northern Syria, the latest episode will have been a jarring reminder of just how futile it is to trust the Americans. Israel and Saudi Arabia excepted, the US is liable to treat its allies as expendable at a moment’s notice.

A century of betrayal

The West’s list of betrayals of the Kurds has been astonishingly extensive. When the Ottoman Empire was carved up in the wake of the First World War and new nation states were created, the Kurds had been promised a homeland by the Treaty of Sevres in 1920. That commitment lasted exactly three years, before being reversed by the Treaty of Lausanne in 1923.

Since then, the Kurds have never relinquished the dream of a homeland of their own although – today – Kurdish populations are still spread across southern Turkey, northern Iraq, northwestern Iran and northern Syria. To date, the best that has been achieved has been the Kurdish autonomous enclave in northern Iraq – which the government in Baghdad regards as being only a federated ‘region’ of Iraq under its ultimate control. Inside Turkey, the Erdogan government brutally oppresses its Kurdish population and treats its political aspirations as terrorism. For its part, the US has been a treacherous ally of the Kurds for decades. In 1975, the US indirectly encouraged the Kurds in Iraq to rebel against Saddam Hussein and – when they did – it then reconsidered, and pressured the Shah of Iran to cut off his support to the Kurdish rebels.

This process was repeated in the wake of the 1991 Gulf War, when the US encouraged the Kurds to rise up against Saddam, and then virtually stood by while his forces slaughtered tens of thousands of them, and turned roughly a million Kurds into refugees. Belatedly a “ no fly” zone was created to protect the Kurds in northern Iraq, and this later became the basis for today’s limited form of Kurdish self-government.

At the same time in the early 1990s, the Western public was being encouraged to donate relief funds via the widely publicised Concert for the Kurds (Sting! Paul Simon! Chris De Burgh!) The concert created an outpouring of global sympathy that ended up doing very little for the Kurds, but it did earn Jeffrey Archer a knighthood. At the time, Archer claimed that his concert had raised 57 million pounds for the Kurds. A subsequent audit showed the concert itself had actually raised only 1.5 and 3 million pounds at most, of which the Kurds reportedly received about 250,000 pounds.

The Kurds were once again fighting in the frontlines in the overthrow of Saddam Hussein. Back in 1970, decades of battle in Iraq had culminated in a draft autonomy plan that offered a limited extent of self-governance to the Kurds – a proposal which was then shelved by (a) the outbreak of the Second Kurdish/Iraqi war of the mid 1970s that I deferred to earlier, and (b) by the horrendous Iraq versus Iran war of the 1980s, and (c) by the 1991 Gulf War and its aftermath.

With Saddam overthrown, a revised version of the original 1970 draft autonomy plan finally became feasible. From its capital in Erbil, Iraqi Kurdistan is governed today by the Kurdish Regional Government (KRG) and the population of roughly 5.8 million people gets to elect a parliament of 111 seats. As mentioned, this area remains a federated region within Iraq, and there have been recurring disputes about the extent of territorial power and overt the extent to which Kurdistan’s oil proceeds need to be shared with Baghdad. An attempt by the Iraqi Kurds to push for a referendum for full independence backfired spectacularly in 2017, in that it was widely opposed by the Baghdad government and by its Western allies.

The current Kurdish flashpoint is in northern Syria, where the battlefield successes against IS by the homegrown YPG (Peoples Protection Unit) fighters drawn from the local Kurdish communities have enabled them to carve out a Syrian region that the Kurds call Rojava.

The Kurds had hoped that Rojava would become a permanent autonomous enclave vis a vis the Assad government in Damascus, akin to what the Kurds have achieved in Iraq – although the Rojava Kurds are significantly more radical than their counterparts inside Iraq.

Turkey however, will not accept the Rojava enclave on its border, largely for fear of the model of independence that it offers to Turkey’s oppressed Kurdish population. Trump, aware of how the continued US support for Saudi Arabia over the Khashoggi affair had enraged Erdogan, offered Turkey a free hand in northern Syria by pulling out US troops, in an obvious gesture of appeasement.

Yet for now at least, John Bolton can see that giving Turkey a free hand to slaughter a brave US ally might be a rather bad look. Such treachery however, would be entirely consistent with the West’s historical treatment of the Kurds. In many respects, as British journalist Robert Fisk keeps on reminding us, the Middle East is still trapped by the unjust imperial boundaries that the West drew up more than a century ago.

For over a decade, Matthew Dear has been a techno multithreat offering (a) big cavernous EDM under his Audion name (b) interesting selections and mixes in his contribution to the DJ Kicks series, and (c) great, Bowie-inflected pop dance music under his own name. On the “Bad Ones” cut from his excellent album Bunny, Dear adroitly uses the Canadian duo of Tegan and Sara alongside his own vocals, in a typically wry/ingratiating/menacingly predatory song about bad boy sexuality:

I’ve played a role in all your tears / Hate flowers but they seem to work on you, my dear / Freaking out and paralyzed / Your body tempts me…. I haven’t told you lies this year / Wouldn’t send you flowers if my love was insincere / Freaking out and paralyzed / Your body takes me…. If I was one of the good ones I don’t think you’d like me / I’m one of the bad ones / And that’s why you feel lucky….