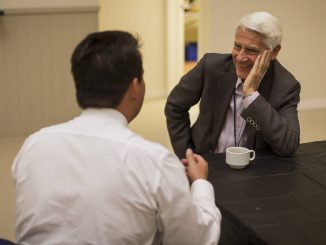 Every year around about this time, National floats its own distinct vision of a different sort of Green Party. If only… Almost exactly a year ago, National leader Simon Bridges was talking about this variation on the theme:

In terms of the Greens, if they were a true environmental party that wasn’t focused on other bits and bobs, they could be a party that we could work with and work with strongly,” Bridges said.

Flash forward, and Bridges was at it again yesterday, and touting his interest in supporting a new, true, and potentially blue environmental party willing to forsake the “trendy lefty things” that so distract the Greens.

[Bridges] said he had heard from New Zealanders about “the tragedy of a Green Party in name, but is to the left of Labour and is not able to get the wins to the environment that would be there were they to sit in the middle”.

Hmmm. To swallow any of that, you’d have to think you could somehow make more gains for the environment by joining National (the farmers party) than you could from being in a coalition with Labour. That’s a stretch. With good reason, many environmentalists regard the National Party as more part of the problem than part of the solution when it comes to meaningful action on waterways pollution and climate change. Currently, and as part of the new government, Greens are making more gains via Labour than it could ever have hoped to achieve with National – which still appears content to pursue its fixation on economic growth at the expense of the environment.

In reality – and how Greens co-leader James Shaw must be sick of repeating this – the Greens have never been merely an environmental party. Social justice has always shared an equal place with the environment in the party’s kaupapa. Bridges knows this. So his dismissal of the Greens’ social justice concerns as mere ‘bits and bobs’ and ‘trendy lefty things’ is deliberate, and revealing. Does he mean ‘bits and bobs’ like the family violence and sexual violence issues that Greens MP Jan Logie has been working successfully on, and which culminated in the Family Violence Act due to take effect in July?

Yep, from a National Party vantage point, domestic violence is just ‘bits and bobs’ stuff on the side.

Moving right along… the wider goals that National have in mind with this talk of a blue/green party include (a) greenwashing its own hard image and (b) splitting the Greens sufficiently to drive them below the five per cent mark, and out of government entirely. To that end, it would not be entirely surprising if former Green MP Kennedy Graham got wooed to join this budding, allegedly centrist environmental vehicle, given his willingness to address a National Party blue-green forum in Canterbury last year.

Plainly, such a party would not have a hope in hell of getting over the 5% MMP threshold by its own efforts, so National would need to game the MMP system once more, and arrange an Epsom-like deal in an electorate to get its blue-green puppet into Parliament.

On this point, Bridges has been talking out of both sides of his mouth this week. In the RNZ interview linked to above, Bridges said that while any new environmental party would have to be “organic” and be able to “drive itself” he wouldn’t rule out an Epsom-like deal in future.

Good grief. As we know, National lacks an MMP partner and this cost it dearly at the last election. If it can’t win an MMP election by having genuinely popular parties to its right, it has only two options. It can try to virtually recreate FPP by knocking New Zealand First and /or the Greens below the 5% threshold, or it can arrange itself a partner by gaming the MMP process. Either way, it is useful to be reminded that National is no friend of proportional representation, and apparently cannot function within its rules. Instead, it seems a bit like one of those big kids whose parents need to bribe other kids to show up to its birthday party.

Footnote One: In the cause of truth-in-packaging, lets be clear that the blue-green party being touted would NOT be centrist. It would be a greenwashing exercise aimed at softening National’s economic fundamentalism, without unduly getting in its way. Does anyone really think an environmental party dependent on National for its presence in Parliament would be capable of speaking truth to power? As soon as any “centrist” environmental party seriously suggested to a future National government that the ‘polluter pays’ principle should extend to farmers, they’d be toast.

Footnote Two: Let us also not forget though, that the actual Greens have done major deals before with a National government e.g. on housing insulation. Yep, having warm and healthy housing is evidently just another one of Bridges’ ‘bits and bobs’. Last year, the Greens also did a deal with National over Question Time.

The willingness to deal is there. If only National showed itself willing to change. On current signs though it will be fighting the 2020 election largely with the policies it took into the 2008 election.

Footnote Three. Finally, only the paranoid right could regard the Greens as a ‘far left’ party. Any party that signs up to an austerity straightjacket like the Budget Responsibility Rules – as the Greens did – is not a left wing party. It is a centrist party, and arguably to the right of public sentiment on social issues. It is only National’s inability to update its 1990s views on the environment, taxation and socio-economic inequality that keeps the Greens from working with National.

Music from (not so green) Mali

Over the past decade, a lot of great musicians from Mali has crossed over into popularity in the West: Tinariwen, Ali Farka Toure, Amadou and Mariam, Salif Keita etc etc. More recently, the Music from Saharan Cellphones series has brought a lot of other lesser known figures from the Saharan region to a wider audience. From volume 2, here’s DJ Mopao:

And though I’ve linked to this track before in its 2012 incarnation, here’s a recent re-recording by the singer/guitarist Mdou Moctar of his languorous signature track “Anar”: