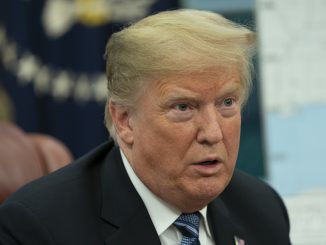 ‘Tis the season to be jolly, and for wrapping a plea bargain under the Christmas tree for all ye formerly merry, Trump-connected gentlemen. Reportedly, Michael Cohen, Paul Manafort and Michael Flynn have all been co-operating with the probe led by special counsel Robert Mueller. Flynn has done 19 interviews so far. So what chance has the Trump presidency got of surviving, all things considered?

Lying for your boss, it seems, has consequences. Flynn and Cohen have both confessed to lying to federal investigators. (Manafort is a special case in that he not only confessed to lying, but also reportedly lied during his confessions as well.) Though much of the relevant detail has been redacted, Flynn’s problems began with his lies to authorities about the extent of his meetings with Russian ambassador Sergei Kislyak (to discuss the lifting of Russian sanctions) during the transition period after the 2016 election, and before Trump took office in January 2017.

Flynn also lied to the feds about his interactions with the Russians over a UN Security Council resolution on Israeli settlements, a resolution that former NZ Foreign Minister Murray McCully helped to shepherd through the Council. Flynn also misled the Justice Department in a March 2017 account of his prior lobbying on behalf of Turkey. Flynn is due to be sentenced on December 18. Thanks to Flynn’s extensive and valuable co-operation, Mueller’s office has said that he will not face jail time. No such clemency for Cohen, Trump’s former personal lawyer, who will begin a three year prison sentence in March.

Cohen did not sign a full co-operation agreement with prosecutors, although he has held out the prospect of making further revelations about Trump in future. Other unco-operative players have done time already:

Three other defendants in the Mueller probe have been sentenced. They were internet fake ID salesman Richard Pinedo, who is currently serving six months in prison in California even after he helped Mueller track down a Russian social media propaganda scheme; George Papadopoulos, who’s finishing a two-week prison sentence after he pleaded guilty to lying about his interactions with foreigners while he was a Trump campaign adviser; and Dutch lawyer Alex Van der Zwaan, who served about a month in prison after he lied about his communications following a Ukrainian lobbying project.

On oath, Cohen had lied about his role in the illegal cover-up of accusations by two women who had sexual relationships with Trump. Allegedly, Cohen had been instructed by candidate Trump to buy the women’s silence, which is a felony offence if done during an election campaign. Cohen also lied about the extent of Trump’s business dealings with Russia, which apparently continued while the presidential campaign was still in full swing.

The central question with all these activities is whether there is sufficient evidence to prove that Trump carried out, or ordered, an obstruction of justice with respect to the silenced women, or with regard to the Russians on a range of business and political issues. If charges of obstructing justice are the end game, Mueller will have to prove not only that Trump was a party to such acts but that he knew they amounted to obstruction, and that such obstruction was against the law.

That’s a high hurdle – given that Trump appears to have no compunction about using the Justice Department as a tool for crushing his allies and pardoning his friends. Wrong? Not if he does it. One can almost hear the Trump defence lines now: “I didn’t do it. And if you can prove I did do it, I didn’t think it was wrong. Hillary did it.” To trigger an impeachment process, it would also require the Republican Party (notoriously captive to Trump) to agree to file papers for impeachment.

That seems very unlikely. Even Jerry Nadler, the New York Democrat who will shortly take over the chair of the House Judiciary Committee, has said that the felonious Cohen payments would be “impeachable offences” if proven, before adding that “whether they’re important enough to justify an impeachment is a different question.”

Trump has, of course, been skating on the thin ice of obstructing justice for a very long time. The classic example? That would have had to be when Trump placed pressure on then-FBI director James Comey to show leniency in the bureau’s investigation of Michael Flynn. As the NYT says, the President has been obstructing justice in plain sight. Whether he will be held criminally liable for doing so remains to be seen. Typically this week, Trump has been diverting media attention from Mueller by threatening to shut down the US government altogether.

As the Washington Post says, the White House appears to be applying a “shrugged shoulders” strategy” to the findings of the Mueller probe – “by calculating that most GOP base voters will believe whatever the President tells them to believe.” Business as usual.

It is hard to tell whether Trump – or the Republican Party he controls – has the bigger difficulty in respecting the basic norms of democracy. In North Carolina, there is extensive evidence of ‘irregularities and improprieties” (ie illegal voter suppression) committed the midterms campaign of the Republican victor – such that a fresh election may well need to be held in the state’s Ninth Congressional District.

Even more brazenly, outgoing Wisconsin Republicans have attempted a coup d’etat by passing laws that limit the powers of the incoming Democratic politicians. These restrictive measures were passed in a lame-duck session of the state legislature. This gambit seems unlikely to survive legal action by the Democrats, who have been elected by Wisconsin voters to do a job. It isn’t a job that should be defined by the bad losers that the Democrats defeated at the polls.

Unfortunately, these two examples of the mood of the electorate don’t bode very well for any attempt to remove Trump from power, or to vote him out of office in 2020. In all likelihood, he wouldn’t allow it. Donald Trump’s destiny is to be a winner, not a loser.

The Reign of Spain

This year has seen Latin music reach out well beyond the likes of “Despacito” and the dance charts. The Bruja album by Mala Rodriguez and the new El Mal Querer album by the Catalonian sensation Rosalia have both made serious inroads into pop and indie audiences as well. So much so that Pitchfork this week picked El Mal Querer as its 6th best album of 2018, and ranked its “Malamente” cut as the year’s third best single.