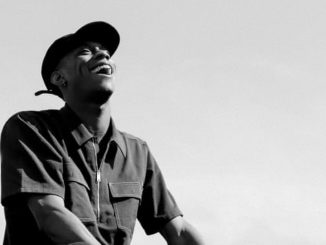 For starters, my favourite cut of the year… Oliver Godji, who records as Octavian, is a French/British/Angolan rapper based in London. As someone born in Lille, France, he didn’t qualify for welfare in Britain – so he spent much of his teenage years living homeless in London, after he dropped out of the same music school formerly attended by Adele and Amy Winehouse.

Octavian finally broke through late in 2017 with a solid, dance cut called ‘Party Here’ that expertly combined elements of rap, grime, and drill. Around March of this year though, he took a 180 degree turn with “Hands” which sounded NOTHING like its predecessor. This atmospheric, structurally disjointed cut shouldn’t work, but it magically comes together behind a lyric about how once he’s famous… well, then maybe she’ll start to pay notice:

A collaboration with Mura Masa (“Move Me”) is also worth checking out for something more representative of his dance tracks. But to show “Hands” was not an outlier – he cites Bon Iver and James Blake as influences – here’s Octavian with the charming, equally off-the-wall cut called “Little”:

Two years ago, Werewolf rated Mitski Miyawaki’s Puberty 2 as the best album of 2016, and her Be The Cowboy follow-up has similarly been the No 1 album choice in the 2018 lists published by the likes of Pitchfork and Consequence of Sound. She’s playing at Laneway in January – although a summer afternoon festival slot for her four piece band may not be the right environment to do justice to Mitski’s combination of guitar noise, expertly structured ballads, and fierce lyrics about lust, depression and dislocation. Your choice. Lets hope she comes back sometime to do her own gigs.

On Puberty 2 the intense ballads (eg “Your Best American Girl”) sat in balance alongside the beautifully controlled noise of say, “My Body’s Made of Crushed Little Stars.” On Be The Cowboy you can find a similar combinations of contrasting and complementary tracks. “Two Slow Dancers” fpor instance, is a lovely song about ageing, while “Geyser” sits down at the noise/sustain end of the pool – yet this time around, everything is tighter, more succinct, and even better controlled…

Mitski comes at her music from several vantage counts as an outsider. On ”Your Best American Girl” she wrote about the anxieties of being a Japanese-American woman in a culture that worships blonde goddesses. Classically trained, she also came to indie rock with a command of song structure honed by all those years of sitting at the piano.

What makes Be The Cowboy so interesting is how concise its 14 brief tracks and whole concept prove to be. After a breakthrough album, most musicians would take the opportunity to become more expansive. Yet in these songs, Mitski’s usual obsessive interest in the contrast between an icily composed exterior life and the seething passions within would risk tipping over into cliché if the emotions and directions were laid on too thick. Less is definitely more here. She just needs you to stay focused. Here is what is probably the most conventional song on the album, and that’s not a criticism:

And here’s a spikier cut…about love being bigger than the entire restless universe, while also necessary for each and every little one of us to function within it:

I need something bigger than the sky
Hold it in my arms and know it’s mine
Just how many stars will I need to hang around me
To finally call it heaven?

From the Catalan region of Spain, 25 year old Rosalia Vila Tobella has been one of the breakout acts of 2018. (She had both a hit album and scored a starring role in Pedro Almodovar’s next movie, opposite Penelope Cruz. ) Last year, she released an album based on her experiments with flamenco, but this year she’s chosen to make a great pop album called El Mal Querer that is widely accessible to anyone regardless of language barriers. A kind of concept album, its about a doomed relationship inspired by her take on a 14th century novel set in the Occitan regions of Spain, southern France and Italy. Here’s “Malamente” … it combines her EDM and flamenco interests in a lyric about premonition, and about the impulse to begin something even though you know its bound to end badly…

Here’s another excellent cut called “Pienso En Tu Mira” ( ie. “Thinking About Your Gaze”) from the same album. As she has explained, she used a sample of Bulgarian voices to set up the track, and then came up with the bassline while kicking back on El Hierro, in the Canary Islands …

This raging track by Melbourne’s Camp Cope already has the nostalgic feel of a classic cut. Lead singer Maq sees the continuity in her own personal struggles (for love and respect, for the band’s success) with the wider battle for equality faced by women in a music business that’s full of casual to overt sexism ( “Treat them like queens until they disagree” …” Its another straight cis man telling me they know more about this than me” etc ) In this line of work as Maq says, female bands often find themselves there just to fill the quota.

Since Maq is so often in the spotlight, it was good to hear the attention shift on the 2018 album highlight “UFO Lighter” to the bassline:

For the past three years, Nilufer Yanya (she’s of Turkish/Irish/Bajan heritage) has been slotted into the Next Big Thing category. At the age of 23, she’s biding her time though, and evolving at her own pace. “Heavyweight Champion” takes a while to register – its not as immediately appealing as past tracks like “The Florist” or “Baby Luv” – but it rewards you, if you stick with it.

And here’s “The Florist” which is still a great song in any year:

On a couple of tracks this year (starting with “Controller”) Channel Tres broke through with his own deadpan, insistent brand of terse West Coast rap. “Jet Black” is an ideal driving song focused on the bassline, and on the need for MORE sub in it, as always:

And here’s a 2018 discovery of an old song from a 2013 Spanish rap album (Bruja) released by the ferocious Mala (“The Bad One”) Rodriguez, who has been doing this sort of thing for nearly 20 years, without losing any of intensity along the way. “Gitanas” was the first song by Mala Rodriguez to hit home with me – but this track “33” is just as hard, and it sits astride the chugging norteno rhythm that used to be such a specialty of the Tijuana EDM band, Nortec Collective who would probably have been at their creative peak around the time this was recorded. BTW, the “33” reference is to her saying that as a mature woman of that age, she can do stuff and face down stuff she couldn’t have handled earlier on:

This may sound like a conventional female singer/songwriter track – and it is – but it was also one of the best break-up songs I heard in 2018. It gets that sense of dislocation, of making a new life outside of the groove that the relationship had created. Imagine it being your birthday and us not being together on the day, to celebrate it. Imagine there’s a dog in the yard and its not ours. Imagine a life without you. The album There’s Always Glimmer is well worth checking out.

The Other Years: Red-Tailed Hawk (Live)

A lot of traditional-but modern music made an impact this year. A new Mountain Man album, the amazing House and Land album from last year…and like Mountain Man ( who has seemingly ceased functioning years ago) it was great to welcome an unexpected new album by the influential north-western band Dear Nora. But this live cut by singer Heather Summers and violinist Anna Krippenstapel) (who call themselves The Other Years) was a standout in this genre for me:

The terrific French-Canadian electrodance musician Marie Davidson had a productive year in 2018, both under her own name and in the Essaie Pas side project she has with her husband Pierre Guerineau. (Under the Essaie Pas banner, the duo released an album loosely based on Philip K Dick’s novel A Scanner Darkly.) As usual with Davidson, there’s a lot of intentional irony in the lyrics for this track from her (also ironically titled) Working Class Woman album …which includes a cut called “Workaholic Paranoid Bitch” than can speak to us all. Here’s “So Right”

Low: “Always Trying to Work it Out”

And since talking before (re Mala Rodriguez) about style-with-age, Low also managed this year – just as Slowdive did a couple of years ago – to release an album (Double Negative ) that distilled everything that had come before in the decades (it seems) that they’ve been operating:

For added measure, “Poor Sucker” artily and artfully conveys what happens when you reach the end of the line on this dark road:

I know, this is cheating. The song came out in 2017, and even this live version from KEXP was recorded last year. It gets included because the concert earlier this year in Wellington by Mike Hadreas was the best live gig I attended this year. Plus, that same Perfume Genius show ended with Hadreas doing his own unexpected take on Alex Chilton’s greatest song, “Kangaroo”… So all praise for that. Here’s ‘Slip Away’ again:

Yes, there is such a thing as warm, life-affirming black metal. Deafheaven have found that happy place five years after their breakthrough moment with 2013’ s Sunbather album, and its great opening cut “Dream House.” This year’s Ordinary Corrupt Human Love saw Deafheaven’s core duo of George Clarke ( vocals) and Kerry McCoy (guitar) largely put their past problems with depression, exhaustion and substance abuse ( McCoy, alcohol) behind them…

“I’m reluctant to stay sad” Clarke says at one point on the album highlight “Honeycomb”..It would also have to be one of the few songs in 2018 to name-check the Argentinian writer Julio Cortazar:

As a bonus, the video for “Honeycomb” is a lovely homage to hanging out in the Bay Area – from Oakland to the Embarcadero to the aquarium building in Golden Gate Park to the Palace of Fine Arts and many other points in between…even tourism staple Lombard Street gets its time in the sun here . They’re no snobs.

Finally, and talking of long songs that evoke a sense of place, Lana Del Rey’s resurgence and re-invention was one of the unexpectedly happy stories of 2018. As her beef with Azaelia Banks showed mid year, she now seems a much more emotionally engaged person now than previously, when she was an icy cultural totem whose self –caricature risked becoming redundant, even when the caricature was the main point.

“Venice Bitch” is a long, mesmerizing celebration of Venice Beach past and present that eventually (and endearingly) segues into a much-loved Classic Hits track…. Along the way, the nagging, recurring images in the video are a good analogue for a past that keeps coming at you, without ever arriving. Meaning: we may all still be driving the same roads as we did before, but we’re on our own now…