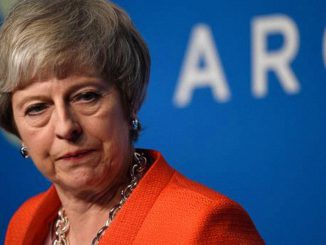 When under stress, British PM Theresa May reportedly eats peanut butter straight from the jar.

Crunch time is looming on Tuesday night in Britain, amid every sign that May’s compromise deal for Brexit is headed for a heavy defeat. So bad are the signs that a defeat by “only” 30-50 MPs is being counted as a qualified success that might enable May to keep her job and stagger on (for a while) depending on her readiness/ability to head back to Brussels and win a few more concessions. Dream on. Elsewhere in the British media there is much talk of a second Brexit referendum, a leadership change for the Conservatives and the calling of a general election. In the halls of power there are dark mutterings of “Corbyn by Christmas”.

In May’s time of crisis, it is hard to feel much sympathy for her. A Remainer before becoming PM, she wasted a great deal of precious time and personal credibility in trying to convince the party hardliners that she was one of them. Remember May’s “red lines” that she would not/could not cross? Basically, instead of preparing the nation for the compromises to come, she put the preservation of party unity ahead of country.

While doing so, she peddled the hard Brexit fantasies that yes, Britain could end EU freedom of movement, escape the clutches of the European Court of Justice, negotiate a painless exit from the EU customs union and secure a new trade deal with the EU and the rest of the world … And thereby steer Britain into a new world of prosperity. All of your Brexit dreams were in reach, she promised, all at once.

As recently as early 2018, May was still being staunch that “no deal would be better than a bad deal” in a vain attempt to scare the Europeans into bailing her out. If only Britain stood firm, it could avail itself of those bits of the EU single market that would satisfy the hardliners that Brexit had indeed meant Brexit, while uniting the rest of the country behind a bountiful outcome that only she could deliver.

The initial rock on which this fantasy foundered was the so-called ‘back stop’ for Northern Ireland. Ireland itself remains in the EU, so to avoid a “hard border” with Northern Ireland, a legally binding guarantee to keep Northern Ireland in the EU customs union was agreed for an indefinite period until such time as the EU and UK could negotiate a new trade deal. As Boris Johnson lamented on the weekend, this outcome would simply allow the EU to “blackmail” the UK in any future trade negotiations.

That dilemma should have been obvious from the outset. Yet as with so many other troubling details (and while the clock was ticking away on the exit timetable) May chose to spend her time trying to keep the Conservatives together by entertaining the delusions of the party’s hardline faction. Relatively speaking, she spent hardly any time at all in preparing the country for the inevitable compromises and cold realities that Brexit would actually deliver. More honesty at the outset would have served her, and Britain, far better.

By the time May produced her “Chequers deal” and tried to re-define herself as a moderate it was too little, too late. May is now claiming that her compromise deal is the only option able to prevent Britain from toppling into the abyss of a “no deal” outcome next March – even though her deal will inevitably make Britain poorer and keep the country subject to most of those detested EU laws and regulations, for the foreseeable. Rather than being an EU rule-maker, Britain would become an EU rule-taker indefinitely under May’s plan, and at great cost. Not surprisingly, the British public has decided it now wants to revisit the whole idea of Brexit. Last week, a majority of those polled supported staying in the European Union.

Nothing better illustrates the delusional nature of the promises leavers made to voters than May’s deal. This isn’t some poorly negotiated version of Brexit: it is the best deal she could have achieved given her misconceived red line to end freedom of movement of people while safeguarding peace in Northern Ireland. It embodies the inevitable price for limiting immigration from the rest of the EU (which our ageing population structure anyway dictates we should be encouraging): Britain becoming a rule taker, forfeiting the influential role it has played in shaping EU law, and at great economic cost, to the tune of tens of billions a year. This is the reality that Brexit entails, and voters deserve a say on whether it’s what they want.

As many commentators have pointed out, the 2016 referendum result is not set in stone. It is not as if the British public must genuflect forevermore to the results of that vote, regardless of the damage it will bring in its wake. The risk of a new poll is entirely political. Some Tories may believe that at this dire point, it is less risky for the Conservative government to offer a second referendum than it would be to call for a general election that would almost certainly put Jeremy Corbyn and his socialist hordes in power.

Either way it is hard to see how Theresa May can survive this week, even if her Brexit deal loses by merely a 30-50 vote margin in Parliament. She can petition Brussels again, but she cannot credibly offer the country a second vote, or (shudder) lead the Tories into another election contest against Corbyn. If the result on Tuesday night in Britain is a 50-100 loss, or by over 100, she will come under intense pressure to resign and/or face a vote of no confidence.

Her possible successors (Raab, Davis, McVey, Johnson, Rudd etc etc) have begun making themselves available. In the Brexit clown car, they’re already fighting for the wheel, even as they head for the cliff.

Over the past five years, Madeline North (who records as So Below) has built a really impressive body of work… This track “Sleep” from last year’s Drift EP is a useful entry point, in that it is such a good example of the emotional depth and intensity she consistently brings to bear. The production offers the song all the space it deserves, too.