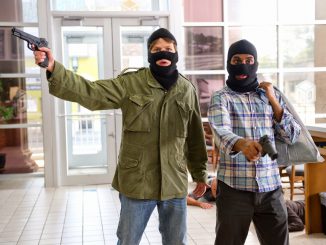 Some folk rob you with a six-gun, as Woody Guthrie once memorably put it, and some rob you with a fountain pen. And some do it in broad daylight without blinking, while the government looks on impotently. The members of the Aussie Banking Gang for instance, all seem to have had a very, very, very good year.

Basically, here’s the deal: you will land in big trouble if you try to rob a bank. (Don’t do it people.) But when banks rob us, we will worry about whether they might have an attitude problem.

Right. Weirdly, the debate arising from yesterday’s report on our banking industry has been focused almost entirely on whether top bank managers have been too “complacent” in their attitudes towards the public, or whether individual staff may have been overly zealous in peddling the bank’s products. Reportedly, banks seem to be acting in their best own interests, and not on behalf of their customers. Who woulda guessed?

Where is the official analysis – say, by the Commerce Commission – of the banking industry’s profit structures, to see how and where those mega-profits are being generated, and what can be done to regulate them down from the stratosphere? A few weeks ago, PM Jacinda Ardern was publicly expressing her concern that oil companies may be fleecing ordinary New Zealanders at the petrol pump. Well, multi-billion profits are being extracted by banks from ordinary New Zealanders and these profit levels are rising at rates of 5% and 10% on top of their previous record annual profits. Yet all we’re hearing from government is that this is a “conduct” and a “culture” issue. Thus, the banks have been put on notice that they need to be more polite to their customers while they’re ripping them off. According to Finance Minister Grant Robertson, the banks need to “up their game” and keep the customer’s long-term interests in mind. LOL.

Reportedly, the coalition government is also waiting until February for Australia to conclude its Royal Commission into the banking industry, before considering what regulatory response, if any, New Zealand might make. That amounts to an interesting delegation to the Australians of all the hard work involved in analysing the structure of our banking industry. Presumably, our Commerce Commission could embark on its own market studies of this industry, now that it is being empowered to do so off its own bat, via legislative changes made this year.

But would it have the resources to do so, though? Probably not. Essentially, that’s why we’re relying on the Aussies to do the donkey work for us. Would Robertson be willing to allocate more resources to the Commission to carry out such work? Probably not. As he told yesterday’s post-Cabinet press conference, there are a lot of calls on the resources that he controls.

Ultimately then, we’ll probably never know what level of damage is being done to our economy (in terms of opportunity cost) by the mega-profits being siphoned offshore by the Aussie robber banks. Or the validity of the margins they charge, and the fees they extract. But by jingo, Grant Robertson will on their case if they don’t improve their attitudes to their customers. “Complacent” is the word that’s being used. The more accurate term would be “contempt”.

For not unrelated reasons, I liked this recent observation by Australian economist John Quiggin:

One of the things that annoys about the neoliberal era is the constant advice to “shop around” for the best deal for services we could once assume were fairly priced, like electricity or banking services. A crucial feature of this is that you can’t do this once and for all. Loyal customers are routinely punished by being left on unfavourable deals while new customers are offered better terms.

It struck me that we could get substantially better outcomes from markets if all firms were required [with certain limited exceptions] to extend to existing customers any offer made to new ones. That would greatly reduce churn and wasteful sales efforts, hopefully leading to a reversal of the increase in retail margins we’ve seen in areas like electricity. This would be the equivalent of Most Favoured Nation status in trade policy, which ensures that all members of the World Trade Organization receive the same treatment.

Increasingly, being urged to shop around for fleeting savings in the shadow of margins set by a banking oligopoly – or a duopoly if you’re talking about supermarkets – is what we’re getting instead of robust competition. New customers, as Quiggin indicates, commonly get thrown a few enticements, while the loyal customer base gets screwed over at rates that more than pay for those few marketing baubles. Meanwhile, there seems to be no appetite within government (or in its underfunded watchdog agencies) for tackling the structural competition issues, especially now that the coalition government is feeling gunshy about the levels of business confidence. More often than not, Cabinet ministers can be found on the sidelines urging customers to shop around for bargains. Fake news? Fake competition is a far bigger problem.

This morning. RNZ has been attributing the turnout in the midterm elections to Donald Trump, both for and against. In fact, Trump isn’t a boon to democracy. To treat him as such is to overlook the Republican Party’s role in voter suppression, a project given a lot of assistance by recent US Supreme Court rulings that have (a) gutted the 1965 Voting Rights Act (b) given states the green light to purge their voting rolls (c) given states the power to limit the facilities for early voting and (d) given states the power to enforce extensive ID requirements that in effect, prevent a lot of people (mainly poor, mainly from ethnic groups) from being allowed to vote.

In addition, the Supreme Court has recently refused to intervene in a case in Wisconsin aimed at preventing partisan gerrymandering.

And that’s before you get into the list of states that can disenfranchise – for life – anyone convicted of a felony. In Florida for instance, a drug offence at 18 means that a 60 year old resident still cannot vote. Every single one of those measures penalises the kind of people who are more inclined to vote for the Democratic Party. Even so… the Brennan Center in New York has some good news on how ordinary citizens have been fighting back against this campaign of voter suppression.

In the midterms, one third of the 100 seats in the Senate, all 435 seats in the House and 34 out of 50 state governorships are being contested. Sadly for the Democrats, most of the Senate seats being contested this year are located in hostile Republican territory, and so are a handful of the Senate seats that the Democrats currently hold. In those contests, the Dems will be on the defensive, merely trying to hold on. In addition, the US does not have a proportional voting system. Thanks to gerrymandering and the vagaries of the Electoral College, a so called ‘populist’ could still be elected as President in 2016 by a minority of the Americans who cast a presidential ballot. Similarly in the midterms this year, the Democrats need to win considerably more than a majority of the votes cast in House races overall (the estimates range as high as 55%) if they are to succeed in securing a majority in the House.

Despite those uphill odds, the polls are indicating that the Democrats will narrowly win the House, while the Republicans will retain the Senate. Theoretically, that outcome could throw Trump’s legislative agenda into gridlock – but its worth keeping in mind that so far, Trump hasn’t actually come up with much in the way of a legislative agenda. He has governed so ineptly that – apart from last year’s tax cuts – he hasn’t won any major legislative gains, despite controlling both the House and the Senate. All of his massive rollbacks of regulations have been done outside and beyond Congress.

Still, these midterms are crucial. If the Democrats win the House, they can hope to block the cuts to welfare programmes that the Republicans have in mind, to pay for Trump’s irresponsible and unaffordable tax cuts. Yet if the Republicans do win the House and retain the Senate, then… all the restraints on Trump will be off. It would be time for all of us to start looking for another planet to live on.

More so even than Taylor Swift, Ariana Grande has become the queen of the kiss-off breakup song. On her last album on a track called “Pete Davidson” she sang about her then-fiance in a song lasting for only one minute, thirteen seconds. After the engagement fizzled, Davidson joked publicly about how in ten years time he’d be working in Walmart, and his co-workers would go hey, how weird it is that someone was singing his name on the store’s sound system.

This week, Grande has sped up the process by releasing a song called “Thank U, Next” that name checks all of her recent exes (three dropped, one deceased) … and Davidson definitely comes out the worst of the bunch. No thanks, in fact, are offered to him.