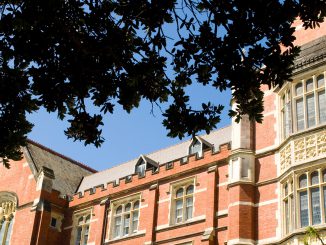 The people protesting the name change from “Victoria University” to the “University of Wellington” really are giving conservatism a bad name. It seems decidedly odd to treat this issue as the bridgehead from which to mount a defence of tradition against the inroads of commerce.

Where were these people over the past nine years as (a) the humanities were being systematically de-funded by Steven Joyce, (b) universities were being treated as production lines for the needs of commerce and (c) any academic willing to risk commenting on controversial policies (eg the freshwater ecologist Mike Joy) had to be very, very brave indeed. The less brave kept their heads down. Arguably, those (ongoing) trends threaten Victoria’s traditions of independent and critical thinking far more than the name on the gate.

In any case, it makes sense to change an internationally confusing name for one that clearly communicates its location. Dying in a ditch over the name “Victoria” went out of fashion back in the 19th century, around the same time Wellington’s university got founded. It was named “Victoria” in 1897, to mark the 60th anniversary of the Queen’s coronation – which is the sort of tradition most people I knew as undergraduates would have been protesting against. Instead, some of them seem to be defending it, in their dotage.

How The Educated Vote

A more interesting aspect of the behaviour of the university educated has to do with their voting habits these days, as compared with the fairly recent past. Most of the university-educated now vote centre-left, not centre-right – and that’s the case in New Zealand, and elsewhere in the world. It is the opposite to what used to happen back in the immediate post-war era, when the cultural elites at university and the commercial elites saw their futures as entwined, and felt united by a common disdain for the policies of redistribution then being promoted by the parties of the centre-left.

In March of this year, the French economist Thomas Piketty published a paper tracing the political journey that the university-educated have taken across the political spectrum in the past 70 years. As Piketty describes it:

In the 1950s-1960s,the vote for left-wing (socialist-labour-democratic) parties was associated with lower education and lower income voters. It has gradually become associated with higher education voters, giving rise to a “multiple-elite” party system in the 2000s-2010s: high-education elites now vote for the “left”, while high-income/high-wealth elites still vote for the “right” (though less and less so). I argue that this can contribute to explain rising inequality and the lack of democratic response to it, as well as the rise of “populism”.

To brutally summarise the explanation… what seems to have changed is that the centre-left political parties have become socially liberal, but are also now far softer than they used to be when it comes to economic re-distribution. This has given room for the university-trained to be socially liberal without too much pain to their own purse.

This socially liberal/economically conservative combination was the winning mixture that Tony Blair, Bill Clinton and (to some extent) Michael Cullen pursued so successfully. Meanwhile, over on the centre-right, the former strict linkage of conservative social values with economic conservatism has been breaking down for decades. Conservative parties have been doing their best to reserve their old socially conservative messages only for their rural support base, while trying to appear socially liberal to urban voters.

Crucially, and in the name of populism, they have also picked up a whole new set of allies that used to vote centre-left, but which have been shut out by the forces of globalisation, and by a meritocracy that now defines itself via its ability to prevail in the competition for educational success.

Education, and the paper qualifications that go with it, have become a barrier to social mobility. It can still be an escape route from the underclass that it used to be, but not as much as before. The best brief description of the process was written by the UK historian Michael Young, who invented the term “meritocracy” back in the late 1950s as a satirical warning and then, to his horror, saw it being adopted by the Blairites as a badge of merit. As Young put it in 2001:

It is good sense to appoint individual people to jobs on their merit. It is the opposite when those who are judged to have merit of a particular kind harden into a new social class without room in it for others. Ability of a conventional kind, which used to be distributed between the classes more or less at random, has become much more highly concentrated by the engine of education.

A social revolution has been accomplished by harnessing schools and universities to the task of sieving people according to education’s narrow band of values. With an amazing battery of certificates and degrees at its disposal, education has put its seal of approval on a minority, and its seal of disapproval on the many who fail to shine from the time they are relegated to the bottom streams at the age of seven or before. The new class has the means at hand, and largely under its control, by which it reproduces itself.

Obviously, this process has had political consequences. As Young says, centre-left political parties now have fewer leaders, or even staff, drawn from the old working class. Its leaders come from the teachers, lawyers and political professionals created within its own upper-middle classes. As the ladder of social mobility has been replaced by a layer of qualifications, the resultant sense of “populist” anger and exclusion among those people and communities left behind has been tapped by centre-right parties – who have been adroit at presenting this is as a tribal war against the cultural values of the liberal elite, who have pulled up the ladder of social mobility behind them.

Significantly, on both the centre-right or the centre-left, there is little appetite for revisiting the economic settings, which tend to be taken as a given. Between the major parties, politics has largely been reduced to matters of cultural tone, and managerial competence. Again, Young’s comments in 2001 seem prophetic:

So assured have the elite become, that there is almost no block on the rewards they arrogate to themselves. The old restraints of the business world have been lifted and, as the book also predicted, all manner of new ways for people to feather their own nests have been invented and exploited. Salaries and fees have shot up. Generous share option schemes have proliferated. Top bonuses and golden handshakes have multiplied. As a result, general inequality has been becoming more grievous with every year that passes, and without a bleat from the leaders of the party who once spoke up so trenchantly and characteristically for greater equality.

The recent populist revolts around the world against this process should not have come as much of a surprise to anyone. It took a while to arrive, and – often – it is being “led” by a wealthy elite who are careful to define the political battleground along cultural lines (using ethno-religious and anti-immigrant messages) and not along economic lines. Piketty describes some of the political cleavages that have resulted:

As we’ve seen of late though, populist anger can be so overwhelming that the poor will readily vote against their own economic self-interests. For instance, Trump’s huge package of tax cuts for the wealthy has not significantly eroded the support he enjoys from his low-income, low education base. Nor has the ample evidence of his cronyism, corruption and nepotism. That could be because Trump happens to hate the same high education/high income elites that his support base resents, and he has become adroit at finding new ways to stoke their anger, usually via the same ethno-religious stereotypes that his liberal critics abhor and decry.

Basically… what’s changed is that on the centre-right, the wealthy no longer present themselves (as they did post-war) as the champions of commerce, but as maverick outsiders who will restore its lost virtue, before the world got too educated for its own good.

In a less heated form, our coalition government is a useful mirror image of the same sort of cleavages that Piketty is talking about. It is led by Labour, the former working class party now comprised of meritocratic professionals who take an internationalist approach to trade and immigration. It includes New Zealand First, the protest party of conservatives who remain distrustful of trade and are actively resentful of immigration; and also the Greens, who bring their own version of internationalist values and green growth policies to the table.

What this trio have in common is a short-term commitment to economic re-distribution, but with competing approaches to wealth generation. To head off populist resentment, Labour is doing its pragmatic best to deliver material benefits to those who have been left behind by the economic policies that Labour still tacitly embraces. As the Greens would say, this is not going to be sustainable, longer term.

In all likelihood, the defenders of the name “Victoria” are much the same people who strongly dislike the hip hop tracks I occasionally post here… So hey, in the spirit of compromise, here’s a track by Cat Stevens. Not “I Love My Dog” but his more existential 1977 cut “Was Dog a Doughnut?”.

And as for hip hop, here’s an attempt by Young Thug (always the wild card) at bringing Elton John back into contention…