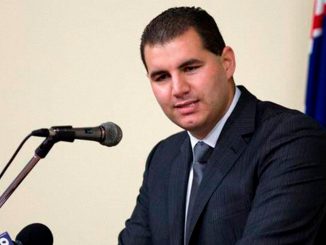 We can agree that some forms of behaviour are quite beyond the pale. When the cult leader takes more than one wife, it is time to leave the compound. Similarly, secretly taping your political leader and threatening to release the contents in public is not a good way to win clemency, or gain support from your team.

In the end, the Jami-Lee Ross tweet about secretly taping his leader and promising to use it – assuming that such a tape exists, and wasn’t just being conjured out of thin air as a random threat – is a more serious offence than the original leak. After all, even the PWC report hadn’t finally and definitively pointed the finger of blame at Ross, but had cited him merely as the most likely suspect. The report even says at one point that since it had needed to rely on the honesty of everyone to forward all of their digital communications, its findings were valid only to the extent that everyone in the National caucus had fully complied. There was wiggle room. Ross chose not to take it.

Still, if the original leaker wasn’t Jami-Lee Ross, the culprit should be out buying a Lotto ticket right now, because they’re in luck. For a self-professed innocent, Ross has behaved awfully like a guilty party, trapped in a corner. If you try to get me, I’ll take the nuclear option and release the tape. That’s hardly the voice of unblemished innocence.

As for the rest of us who (thankfully) do not belong to the National party caucus… we’re right back where we were in late August. So the leaker really was a National MP, who had ‘fessed up at the time and provided corroborating evidence that they were indeed a Nat MP, sufficient to convince the Police within days that here indeed was the likely culprit. Yet when it comes to the eternal question of how Simon Bridges has handled this crisis…his colleagues, this lonely column in the NZ Herald and Michelle Boag all insist that he’s handled it just great. Or is playing a mysteriously canny hand, long term. Or something.

Not really. In fact, he’s been treading water since August. To repeat: two months down the track, nothing has changed since day one. This remains an internal National Party disciplinary matter, and the MP in question has (so far) been refusing to go quietly to the backbench, or to be expelled from the party. It could get messier. Incredibly, we have to wait until this morning to find out whether Bridges regards this as a suspension-from-caucus matter, or as an expulsion-from the-party level of offence. PM Jacinda Ardern’s handling of the Meta Whaitiri affair looks like a model of speed and decisiveness by comparison. And we all need to remember what Simon Bridges ” target=”_blank”>had to say about that process:

National Leader Simon Bridges says an inquiry into allegations MP Meka Whaitiri physically handled a staffer is unnecessary. Instead, he said Prime Minister Jacinda Ardern should have hauled Whaitiri into her office, “looked her in the eye” and demanded an explanation. And then, if that answer wasn’t satisfactory Ardern should have sacked her. “It’s what Helen Clark or John Key would have done”, he said.

Right. So a review and a two months wait is good when he does it, but really, really bad when she does it. Pathetic stuff. In August, Bridges could have done what he urged Ardern to do. He could have taken it on the chin, admitted he had a bad apple in caucus, called in the only credible suspect and disciplined him for treacherously eroding his leadership. That’s what a real leader would have done. Moreover, Bridges could/should have relieved the prime suspect of their responsibilities – as Ardern did immediately with Whaitiri – and asked the caucus for a vote to (at least) suspend Ross. Instead, we had that bungled press conference on October 3, when Ross was sent off on medical leave, for “embarrassing” whoops, wrong word, reasons. At least we now know for sure there is nothing wrong with Ross’s prostate.

Basically, Bridges blinked when faced with a decision in August and bought himself some time by calling for a review. This has now come back to bite him. Indecisiveness has a way of doing that. No wonder the rest of his caucus are now unanimously rallying around him. They’re trying to hold him upright. Ross has self-destructed, and totally isolated himself. It says nothing at all about Bridges leadership capabilities that the caucus now stands united against such a wretch.

On the other hand, what the public has learned from this episode is that Bridges is an opportunist through and through. Under pressure, he’ll choose the route of short term gains, every time. The sad thing is that many people in his caucus – and within the commentariat – will applaud him for it.

Subsequent Footnote. Yep, Jami-Lee Ross isn’t going quietly, and the Bridges tape does seem to exist. It may look like a kamikaze mission for Ross to resign and stand in the ensuing by-election in Botany – but it is also worth keeping in mind that those Japanese kamikazes did a lot of damage and sunk several ships in the course of choosing death over capture and shame. Ross won a 12,839 majority for National in Botany last year. So even if Ross succeeds in substantially splitting the vote, National should still win the seat in a contest that Ross is aiming to define as a verdict on the Bridges leadership. National could well sustain considerable damage – if say, Ross wins four or five thousand votes – while winning a Pyrrhic victory.

Obviously, much will depend on whether the Police find substance worthy of further investigation in the claimed evidence of collusion (allegedly, in misrepresenting a $100,000 political donation) that Ross says he will present tomorrow. If the Police reject the evidence, or give themselves only a tight timeframe within which to exercise their discretion, then Ross’s revolt could eventually amount to very little. But in this surprising affair, we’ve all learned the hard way not to make rash predictions.

Talking about reviews, can’t help but feel one is required into the victory by the kereru in the RNZ/Forest and Bird online campaign for Bird of the Year. It turns out that this was a victory for political lobbying, co-orchestrated by Greens MP Chloe Swarbrick. Hmm. Haven’t the Greens’ complained before about the pernicious effect of political lobbying?

Also, the organising muscle of the Green Party went behind the kereru, one of the few birds not in trouble/not in serious trouble on the entire list. Was support for a safe bet like the kereru one of the secret, redacted clauses in the Budget Responsibility Rules? The kereru – which Swarbrick calls the “labrador of the sky” as a compliment – has not been responding to interview requests.

Full disclosure: I voted for the bittern. Given the chance, I would have voted for the magpie. Sure, it has image problems. Like Simon Bridges, the magpie is in need of a political makeover, starting with its name. Chances are, people would feel a bit better about the magpie if it had a name that acknowledged its bad-to-the- bone character flaws, and ran with them. A name like, say… the zebrahawk?

And here’s a farewell song for Jami-Lee who (Beltway rumour has it) is off to join the Foreign Legion.