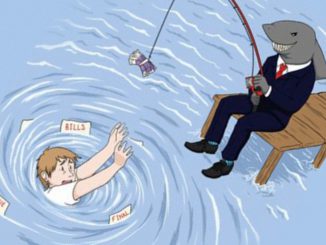 When it comes down to protecting the most vulnerable, Parliament can sometimes move at glacial pace, and do the bare minimum. The coalition government’s attempts to minimise the harm done by loan sharks comes nearly 12 years after a major report in 2007 had identified how fringe lenders were aggressively targeting low-income Pacific Island and Maori communities. As that study had found, only 43% of those accessing loan sharks were, at the time, in paid employment.

As Werewolf reported in 2009, the Credit Contracts and Consumer Finance Act 2003 [superficially amended in 2015] is the relevant piece of legislation, but it mainly governs the transactions between middle class borrowers and mainstream lending institutions. Yet as the 2007 report had pointed out:

There is clear evidence, however, that the Act does not provide sufficient protection to credit consumers dependent on “fringe” lenders. While the detrimental effects of fringe lenders apply to all who use them, the impact on Pacific communities is greater because they are disproportionately represented in the low-income communities in which fringe lenders operate. There can be no doubt that fringe lenders have flourished in South Auckland in the period since the CCCFA became effective, and that they deliberately and aggressively target Pacific communities.

The harm done is considerable:

The realities for many are that they and their families are struggling to survive, not only physically but also mentally, emotionally, culturally and spiritually. The complexities surrounding Pacific cultural and financial competencies tear at the already fragile intergenerational/intra-ethnic/gender roles and responsibilities of Pacific consumers in a way that jeopardises the well-being of many Pacific individuals, families and communities of South Auckland. While… there is a growing awareness of financial literacy amongst some Pacific consumers, it is also clearly evident that many Pacific consumers are not coping at all well, and are not in control of their socio-cultural realities, resulting in negative outcomes at personal, familial and community levels. Many Pacific consumers in this study are of the view that there is a need for non-mainstream credit providers, and they are keen to meet their financial obligations. However, the confusion and stress caused by hidden high costs and exploitative credit contracts exacerbates their already vulnerable positioning, with negative and dire consequences in many cases.

Back in 2009, the Auckland lawyer/journalist Catriona MacLennan had reported in Werewolf on key aspects of the loan sharking industry, and suggested several solutions. As she pointed out, many of the loans being sought were going into the purchase of vastly overpriced second-hand cars of poor quality, that soon left families with the need for additional loans to cover the costs of repair. Or they were unrepairable write-offs that left the families with no car, a large and rapidly mounting loan bill to repay, and fresh costs for transport.

Medical bills were also a prime reason why people turned for help, to fringe lenders. In her article in Werewolf, MacLennan called for the government to use Kiwibank to prise those at risk out of the hands of unscrupulous lenders, by advancing the kind of micro-loans that comprise the bulk of loan shark lending, but on far more reasonable terms. Such an intervention would recognise that the low income borrowers involved do often struggle to communicate with mainstream lenders, or obtain credit from them.

Point being, for well over ten years, there has been a recognised need to cap the size of the loans, the number of simultaneous loans, and the level of interest rates that fringe lenders can charge. Given that loan sharks tend to use standard loan forms and terms of repayment, there is also little justification for the exorbitant fees often charged to establish and manage such loans.

In 2009, the Labour backbencher Charles Chauvel introduced a private member’s bill to address a few of these problems. As with the Ardern’s government’s current efforts to control loan sharking, Chauvel’s Bill did not set a maximum annual interest rate. Why not?

“One of the problems of enshrining in legislation a rate like 48%, Chauvel replied to me [in 2009] “is that seems quite high – and it then becomes the default rate.” Everyone would then charge the maximum.

Instead, Chauvel proposed to let the Reserve Bank governor handle the setting and the monitoring of those maximum lending rates. Chauvel also proposed that if the borrower hadn’t been provided at the outset with a clear and transparent statement of the loan conditions and costs, any subsequent inability to repay would result in the borrower having to meet only the amount of the original loan.

Wouldn’t that create an incentive for borrowers to default, knowing they would only then need to repay the original sum? “No,” Chauvel said, “it would create an onus of proof on the borrower to show they had money thrown at them without proper inquiry. I think that is a prudent way to put responsibility back on the lender.” In practice however, such commitments provide only flimsy safeguards. In a situation where the borrower wants the loan, there is an obvious incentive for them to overstate their capacity to pay, and to understate their commitments. Both factors would serve to get the lender off the hook, in any subsequent default situation.

Finally though – couldn’t the fringe lenders also be seen as providing a social service in offering loans to people who mightn’t otherwise qualify for financial assistance? Chauvel’s reply to that question still seems relevant today: “Only in the way that a bartender provides a social service when they supply booze. Yes, I suppose you’re right. But we regulate that activity, because of its potentially harmful effects. And that’s what I’m proposing here.” His Bill went nowhere.

The coalition government is offering little to dilute the harm being done by fringe lenders, and even the puny measures envisaged will take years to phase in. According to Cabinet papers, some 200,000 New Zealanders resort to fringe lenders every year, but “only” one eighth of them go into default. That default rate is certainly high enough to be alarming – but it also doesn’t address the impact that predatory lending has on the household budgets, living standards and health of the majority who do (somehow) manage to pay back their loans on time.

Basically, the government is proposing to cap the interest rate chargeable at 100% of the original amount via legislation that Commerce and Consumer Affairs Minister Kris Faafoi says is unlikely to come into effect until 2020. This glacial response will address only the outermost extremes of the problem, while leaving the fringe loan industry comfortably intact. Sure, some people do need short term loans and often they can’t put up the sort of collateral that mainstream banks normally require. Yet given the social risks to those who utilise this short term loan assistance, that’s all the more reason for government to (a) do far more to provide the assistance itself and (b) regulate the loan sharks in meaningful ways that shrink their presence in the communities they prey upon. Surely, the government’s aim should be to run the loan sharks out of business.

If it felt more motivated, the government could have chosen to put a chunk of its current $5.5 billion surplus into Kiwibank, to enable the bank to offer the kind of micro-loans (in the $500-2500) range that comprise the bulk of loan shark lending. All very well for PM Jacinda Ardern to talk about wanting to eliminate child poverty – but her government isn’t doing much to confront the predators feeding upon the incomes of the families in question. When the accidents of fate strike those with little or no income stored away in reserve, the government needs to be on hand to help. Yet before and after the GFC, the regulatory emphasis has been much further up the socio-economic ladder. Labour, while in government, sought to regulate the finance companies that were putting the lifetime investment of middle-income New Zealanders at risk.

The contrast with the lack of meaningful action on loan sharks is striking. To all intents, the vulnerability of low income New Zealanders to the twin predations of loan sharks and pokie machines has been all but ignored over the past decade, by Labour and National alike.

Footnote: Predatory lending seems to be hard-wired into our lending system. One reason the Aussie-owned banks can rake off such huge profits from their operations in New Zealand is that they’re allowed to get away with the huge gap between the consistently low cost of the money they access, and the double-digit repayment rates they extort for lending it, as reflected in our credit card bills. Some people rob you with a six-gun, as Woody Guthrie said, and some will do it with a fountain pen.

In 2016, Pinegrove’s Cardinal album offered a striking debut collection of old timey, but resolutely modern folk rock… Last year though, the band’s career was derailed by an accusation of sexual harassment against the band’s lead singer and main songwriter, Evan Stephens Hall. Hall agreed to apologise to the person concerned, shelve the band’s next album and stop touring for a year. That time is now up. The band’s audience and momentum though, has virtually disappeared.

In “Rings” the first single from the new album, Hall claims to have learned from what he did.

Another key Pinegrove member, Nandi Rose Plunkett, has since put her formidable talent into her side project Half Waif, which issued a fine tribute album to her late grandmother a few months ago, called Lavender.

And finally, here’s a favourite cut from Cardinal, back from when Pinegrove were still contenders.