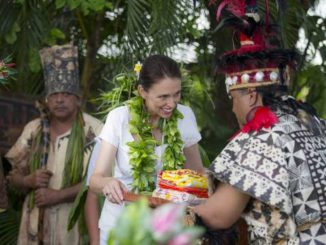 If you want to sample the full range of the petty and misogynistic attitudes of which New Zealanders are capable, then social media will have been your happy place over the past 48 hours. Truly, the abuse being levelled at PM Jacinda Ardern for doing her job at the Pacific Islands Forum shows just how much – and on how many levels – Ardern seems to enrage a goodly number of citizens. They’re angry at her for getting pregnant, for having a baby, for flying to and from the Forum on an official plane…you name it. Anything she does appears to be triggering for some people. Its as if she’s having it all – and at their very own personal expense !

Incidentally, it makes you wonder about that proud tradition of us being the first country to give women the vote, and how deep that kind of commitment really runs. Essentially, the bile levelled at Ardern over the Forum trip has dripped with resentment that a woman! – with a baby! – should dare presume to be running the country. Or that such unnatural women should even try to have any work/life balance at all.

Well… is the nation getting value for money from Ardern over this 24 hour period? Yes. One, she didn’t have to go to the trouble of attending at all. Other major regional leaders (see below) didn’t bother to show up. But in order to show up and further this country’s interests in the Pacific, Ardern flew out at 2am this morning to participate in the Pacific leaders meeting, and she will get back to New Zealand at 11.30pm tonight. That’s more than a 21 hour working day, with a top level meeting in the middle of it that will include discussions about the Pacific’s response to climate change, the Forum attitudes to regional security, and its stance on asylum seekers and refugees. Along with a lot of fine detail, and a lot of meet and greet. It’s the job, sure – but the Forum attendance this year is a gruelling example of it. By any measure, New Zealand is getting its pound of flesh from Ardern today, on a value-for-money basis.

Yes, and to do that job today, she is indeed flying on an official plane. Because of the Nauru airport limitations, the 757 cannot remain on the island, while she’s there. Reportedly, if it wasn’t being used in this context, it would be incurring costs in training flights elsewhere – such that, in crewing costs, the exercise is close to fiscally neutral. To pursue the costs beyond that point you’d have to measure the fuel costs of flying to and from the Marshall Islands (the only other nearby option) as opposed to the cost of flying to and from New Zealand, and then subtract one from the other. The result would be peanuts. In reality, the Forum has been merely another opportunity for Ardern-bashing, as suggested by this amusing response by Sam Gribben to the media firestorm:

Dutifully, the Pacific Islands Forum meeting is always described each year as the region’s most important gathering of leaders, although the Pacific Island Leaders Group is now a genuine contender for the title.

Still, having announced a “Pacific re-set” in our aid and diplomacy priorities, the coalition government’s two heavy hitters (the PM, and Foreign Minister Winston Peters) felt obliged to attend this year’s gathering on Nauru, whatever the (usual) costs involved.

New Australian PM Scott Morrison wasn’t there though. As the architect of his country’s boat interception and detention policy (when he was Immigration Minister) Morrison evidently concluded that the photo ops on Detention Centre Island wouldn’t provide a great reality TV backdrop for his new administration. In addition, the Nauru government that runs these gulags on Australia’s behalf has banned the Australian Broadcasting Corporation’s journalists from entering the country to cover the event.

Like Aretha Franklin but without any evidence of actually having a soul, Nauru’s president Baron Waqa, just wants a little more r-e-s-p-e-c-t…from all of us. Yesterday though. RNZ reporter Barbara Dreaver was seriously hassled for allegedly not following the correct protocol in talking to a refugee.

Meanwhile… Fiji’s Frank Bainimarama, a perennial no-show at a Forum he says is dominated by Australia and New Zealand, also wasn’t present this year, either. The gathering on Nauru has plenty to discuss, regardless. As some have noted, the sudden global concerns about China’s role in the Pacific has been peculiar given that China has been a presence in the region for a very long time, and its aid and diplomacy efforts have been noted, written about, measured and discussed by Aussie think tanks like the Lowy Institute for nigh on a decade.

Belatedly though, Australia, NZ, France, and the UK are said to be re-focusing their aid and diplomacy to counter the Chinese influence. (The US remains largely fixated on its own territories in the north Pacific.) France is becoming active in this counter-offensive. French Polynesia joined the Forum in 2016, and French President Emmanuel Macron aims to hold a Pacific leaders summit in Tahiti next year. Australia is ‘stepping up’ its Pacific presence, and we are ‘re-setting’ our involvement.

Despite all of this anxious fluttering, it seems unlikely that much that’s concrete will emerge from this week’s talkfest beyond say, the likes of this $10 million gesture by New Zealand in funding a Pasifika TV channel. to boost Pacific coverage, and provide opportunities for journalists across the region. Time will tell whether this becomes the region’s al-Jazeera. If the channel succeeds, as it should, in getting under the skin and up the noses of the region’s leaders, we may not be thanked for the gesture. (Funding al Jazeera hasn’t exactly made Qatar a regional favourite in the Middle East. )

On other issues… New Zealand seems unlikely to support Vanuatu’s move to have West Papua inscribed on the UN de-colonisation register of territories deemed worthy of international support for their hopes for independence. In similar vein – and also probably in vain – French Polynesia opposition leader Oscar Temaru has called for the Forum to debate France’s lack of progress in furthering the de-colonisation of French Polynesia, despite the territory being put on the same UN register back in 2013.

On November 4th, New Caledonians will be voting in an independence referendum, but the polls suggest little desire among the majority to break the territory’s current ties with France.

The most obvious outcomes from this year’s Forum look likely to comprise a joint leaders’ signing of the “Biketawa Plus” security declaration – which as Islands Business recently pointed out, elevates climate change planning ahead of more traditional notions of defence. In 2000, an earlier declaration signed in Biketawa, Kiribati came to provide the major regional framework for the RAMSI security operation in the Solomons – and this year’s upgrade co-incides, as mentioned above, with Transtasman concerns about China that may not be shared quite so keenly by Pacific nations:

Both [Australia and New Zealand] governments have highlighted the rising strategic threat from China, and raised concern over Chinese investment in port facilities that might later be used for military purposes (ironically, a Chinese corporation already has a 99-year lease over the port of Darwin!). In contrast, island leaders have welcomed Chinese investment and loans through the Asian Infrastructure Investment Bank (AIIB), state-owned corporations and the Belt and Road Initiative, although many are debating the potential for debt to be leveraged for strategic purposes.

Both Australia and New Zealand have said they will expand their engagement with the region over the last few years, in response to perceived Chinese strategic advances in an area long regarded as an ANZUS lake.

Besides ‘Biketawa Plus’ the other Forum buzzword has been the “ Blue Pacific” agenda on the stewardship and management of the region’s oceanic resources. Interestingly, this agenda will include the thorny question of how the Forum nations should respond to nuclear waste disposal and contamination – both from leakages at US bases in the Marshall Islands, and in the wake of French testing at Mururoa Atoll.

Despite all the hot air about China’s presence in the Pacific, the Cook Islands can be taken as a useful corrective. Last December, thanks a fairly arbitrary measure of per capita income, the UN ruled that come the end of 2018 , the Cooks will become the first Pacific country with ‘developed nation’ status. Some of the downsides of this new status have been cited by the Lowy Institute here.

The change could have implications for the aid monies that can currently be counted as “development assistance” from the likes of the EU and Japan. If so, China could well pick up any slack, alongside what New Zealand contributes, which looks likely to be unaffected. By the Lowy figures, we provide 48.5% of the aid received by the Cooks, far in excess of the 15.2% from China. The joint water project in Rarotonga (between New Zealand, China, and the Cooks) will not be affected, and local Cooks politicians have stressed that China is not offering it assistance on anything other than standard conditions:

[Cook Island Finance Minister Mark] Brown said the Cook Islands’ only debt with China was a US$16.7 million loan with the Exim Bank of China for the Te Mato Vai water project, a project currently underway involving China, New Zealand and the Cook Islands.

He said the terms were commensurate with those loans offered by the Asian Development Bank and the European Investment Bank.

No doubt the Forum will give some lip service to the concerns being expressed about China by the external players in the region, but there seems little cause for alarm – especially in the light of the political rhetoric around Australia “stepping up” and New Zealand “resetting” their roles in the region.

Song for the Trolls

Decades ago, Groucho Marx pretty much nailed the rationale behind the social media animosity to Jacinda Ardern. Meaning : its petty and irrational, but hotly pursued on principle…