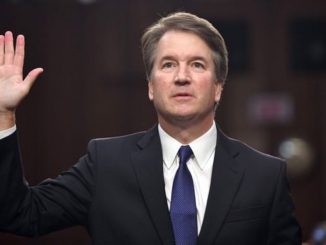 Our media is routinely dominated by news events in the USA – American storms, American scandals, the actions of American politicians etc. Some of that is inevitable. The US is the world’s biggest economy, has the most powerful, far flung military machine and creates the most influential forms of popular culture. Even so, the extent of local news coverage of the nomination of Brett Kavanaugh to the US Supreme Court might seem excessive. Surely, the outcome would not be particularly relevant to us.

Arguably though, it really is. Today is suffrage day when – reportedly – we celebrate women winning a political voice, and ensuring that their voices are heard, respected, and acted upon, despite all the attempts to ignore and silence them. The Kavanaugh story puts all those issues in the context of an alleged act of sexual violence, and also reveals how such accusations are handled – by the courts, by the media and in the arena of public opinion. Especially when rich and powerful men are the alleged perpetrators.

Kavanaugh is seeking to be confirmed in a job – for life – where among other things, he could well cast the crucial vote in overturning the 1973 Roe v Wade precedent on which the right of US women to a legal abortion is based. Back in the 1980s when he was 17 years old, Kavanaugh – with his friend Mark Judge looking on – allegedly tried to rape 15 year old Christina Blasey Ford at a party in suburban Maryland. In her words:

“Kavanaugh was on top of me while laughing with [Judge], who periodically jumped onto Kavanaugh. They both laughed as Kavanaugh tried to disrobe me in their highly inebriated state. With Kavanaugh’s hand over my mouth I feared he may inadvertently kill me.” She says that Kavanaugh also groped her over her clothes and ground his body against hers. At last, she says, Judge jumped onto Kavanaugh so hard that he toppled him and Ford escaped.

Kavanaugh denies that any such incident ever took place. Judge, who was implicated in the alleged assault, has largely backed him up. The Republican Party has denounced Ford’s accusation as an “11th hour conspiracy” cooked up by the Democrats to derail the Kavanaugh nomination. The confirmation vote has now been delayed to allow the Senate Judiciary Committee to separately interrogate Ford and Kavanaugh next Monday, about the alleged incident.

The conspiracy claim is easily debunked. There are medical notes that show that Ford, who is now a psychology professor teaching part time at Stanford University in California, told her therapist in 2013 about the attack and its effects on her. In July – when Kavanaugh was nominated for the Supreme Court position – Ford wrote to her local Democratic congresswoman about the incident, and also to Californian Senator Dianne Feinstein, the ranking minority member on the Senate Judiciary Committee.

Ford did so anonymously, but her identity got leaked last week. (Feinstein sat on the letter initially, but eventually forwarded it to the FBI for inclusion in the Kavanaugh hearings file.)

As Ford told the Washington Post, she had not come forward publicly earlier, because she had feared that “doing so would upend her life, and probably would not affect Kavanaugh’s confirmation”. Her suspicion had been that the Republicans would vote for Kavanaugh anyway, regardless of whether the attack was substantiated or not. On both counts, those concerns seem entirely valid.

The Kavanaugh incident highlights the recurring problem women face with accusations of sexual assault, in that the situation readily becomes a she said/he said conflict where the victim bears the brunt of a further attack, conducted within the courtroom. In Slate, Dahlia Lithwick explained why women so rarely come forward:

Had I been asked to advise this woman, who, according to the New Yorker, is already in trauma, and according to CNN has sought medical help for it, I would have told her to stand down. I would have told her that neither politics nor journalism are institutions that can evaluate and adjudicate facts about systems in which powerful men use their power to harm women. I would have told her that she would be risking considerable peril to her personal reputation, even as she would be lauded as a hero. I would have also told her that powerful men have about a three-month rehabilitation period through which they must live, after which they can be swept up once again in the slipstream of their own fame and success. The women of #MeToo, though, are never quite welcome in the slipstream again. And if you closely observe how one of the most intimate and frightening moments of this anonymous woman’s life is currently being tossed around for political gain, I suspect you might come to agree with me.

Here is what we do know about Judge Kavanaugh: We know that he clerked for and had a years long close relationship with a serial abuser of women and claims he knew nothing about it. He claims he doesn’t recall being on a hypersexualized and misogynistic email list and claims he didn’t bother to search to determine whether he was. He claims that when the serial abuser of women for whom he clerked was revealed to be a serial abuser of women, he believed the victims and yet called the abuser, because he was worried about the abuser’s mental health. Worrying more about the accused judge than the accusers one claims to believe is the system protecting the system. This is why women don’t come forward.

Here is what we do know about Judge Kavanaugh. We know that he was part of a group of young men who saw fit to write a creepy racist and misogynistic email chain—and to pledge to keep it secret. We also know that the “neutral” George W. Bush lawyer who vetted Kavanaugh’s papers (and also represents the disgraced judge for whom Kavanaugh once clerked) deemed one of those emails classified, even though it contained no national security or political secrets. Withholding that email was the system protecting the system. That is why women don’t come forward.

To ram through Kavanaugh’s nomination, the Republicans – who delayed for months and ultimately frustrated the valid nomination by President Barack Obama of Supreme Court nominee Merrick Garland – have also blocked the paper trail of Kavanaugh’s previous political work for the Bush administration, and then dumped thousands of pages onto the Democrats on the night before the hearings began.

Ford has yet to confirm that she will attend Monday’s Senate committee hearings. If she does, any circumstantial evidence will go towards credibility, starting with whether the time and place of the Maryland party (and Kavanaugh’s whereabouts) can be objectively established. As Ford fearfully anticipated, the victim will be publicly put through the wringer by the Republicans on the Senate committee, who will be looking for any discrepancies between the therapist notes – which reportedly did not name Kavanaugh – and the letter that Ford wrote in July.

Mark Judge may not be a helpful witness, to anyone. As

he recounted in his 1997 memoir Wasted: Tales of a Gen X Drunk he spent most of his teenage years either drunk or addicted to drugs. Since then, he’s become a writer for several conservative publications:

He’s floated some controversial ideas in his writings — including asking in 2006 whether gay people are perverts and longing for the days when President George W. Bush could give his wife, Laura, a “loving but firm pat on the backside in public” as a show that he “knew who was boss.”

The Kavanaugh case has amplified the difficulty in women’s voices being heard within political, economic and legal systems still largely run by – and for the benefit of – powerful men. The imbalance is reflected in the struggles that women face in gaining representation in boardrooms, and in achieving their due in pay and promotion decisions. Change is occurring, but only very slowly. In New Zealand – and in the wake of Law Commission recommendations – efforts are being made to make courtroom procedures less damaging to women who bring accusations of sexual assault and rape, and yet without compromising the rights of the accused.

The reality is that the brutal nature of the current adversarial process deters women from bringing complaints in the first place, and from attaining a just outcome when they do so. As noted in 2016, only one in a hundred sexual assaults results in a conviction.

To repeat: the current courtroom practice tends to put the victim on trial in the process of testing her credibility, and as to whether she should be held partly or wholly responsible for the actions of her assailant. One of the feasible options being mooted is to replace this purely adversarial process before a jury, with a more inquisitorial approach, conducted before a judge. There are pilot studies under way, at District Court level.

Change, but at a glacial pace. And as everyone knows, glaciers are prone to recede when heat is applied.

Footnote: For anyone’s peace of mind, it can be advisable to avoid a certain RNZ afternoon panel show and yet – because chance held me captive yesterday – it was almost re-assuring to hear that it hadn’t changed a bit. I heard an articulate woman who had been talked over by two male interlocutors apologise for maintaining a point of view not shared by them, only to be told by one of them that her point of view was important.

As to some of the panel’s business at hand… those accusations of adolescent sexual assault against Supreme Court nominee Brett Kavanaugh did get a brief airing, with the two blokes agreeing on the virtual irrelevance of the hundreds of women who had come forward to say the accusation felt credible to them, and not the product of a conspiracy. Both blokes cited the length of time between the alleged event and the accusation, with one mentioning the desirability of a statute of limitations for prosecutions.

There was so much at stake, one bloke felt – for Kavanaugh whose nomination would “surely” be “destroyed” if the “slightest whiff” of the accusation was deemed credible. No mention of what was at stake for American women should a Justice Kavanaugh vote to overturn the Roe v Wade precedent on which their current right to a safe abortion is based. Gamely, the female panelist suggested that perhaps the delayed accusation had been triggered by the woman seeing her attacker about to be elevated to a position for life on the nation’s highest court.

At programme’s end, the female panelist expressed gratitude (I hope ironically) for the “robust” debate, to which one of the blokes replied that he hadn’t been able to get a word in edgeways. Just joking of course. Let’s hope she was one of those women who could take a joke.

In other words, the news of the day in the same old way.

Rina Mushonga is an interesting mix of Dutch/Zimbabwean/British EDM influences, and this very challenging and brutally violent video for her beautiful “Eastern Highlands” track seems appropriate to the subject of this column… “And shall we take care of each other/ ‘til we get there?” Evidently, only after a real and damaging struggle.

And although there isn’t yet a Youtube video link, the audio for Mushonga’s new single “Jungles” (out this week) can be found here.