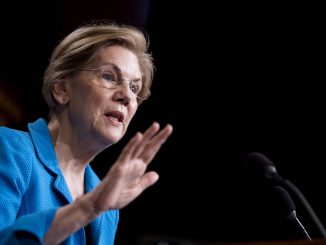 Incredible to see Donald Trump’s ability once again, to dictate the media agenda. This morning the talk was all about his “extraordinary” claim that China is meddling in this year’s midterm elections. How is it doing so? By imposing targeted tariffs on US soybean exports, in response to the round of tariffs that the US previously imposed on China. The very cheek!

No doubt, China’s actions are hurting US farmers in the Midwest. (That’s precisely why China singled out US soybeans for tariff attention.) No doubt, some US farmers will be smart enough to blame Trump for their declining incomes, and may vote accordingly in the midterms. So they should. Trump is blaming China for reacting effectively to a tit for tat tariff war that the US set in motion. To soften the harm his policies are doing to US farmers, Trump is already paying them an extra $12 billion in farm subsidies.

There is nothing ‘extraordinary’ about Trump blaming other people for the blowback caused by his own actions. It’s an almost daily occurrence. Trump-imposed steel and aluminium tariffs have worked in exactly the same way. By some estimates, 16 jobs will be lost in the US for every job that the tariffs create.

Part of the problem being… Trump does not seem to know what a tariff is. Several times this year he has claimed that a tariff is paid by foreigners to America. In reality, it is a tax imposed (at the end of the day) on US consumers, who are forced to pay more for foreign imports. As do US firms that rely on importing components for what they make.

Trump is not just a joke. New Zealand not immune to what he is doing. Remember, we didn’t win an exemption from the US steel and aluminium tariffs. Our lobbying effort couldn’t wheel up the successful likes of Aussie golf champion Greg Norman.

Even more seriously, our exporters are being forced to abandon the lucrative Iran market (already worth circa $200 million annually to us, and expanding) for fear of being hit by US sanctions. Those US sanctions are also forcing up the price of petrol by taking Iranian supply out of the global oil market. After those sanctions really begin to bite in early November the price of Brent Crude could hit $100 a barrel, from the current price of ‘only’ $80. However it has to be said that oil prices could go in any direction between now and Christmas given that China, South Korea, Japan and possibly India appear set to import Iranian oil regardless, and at levels that could nullify the US sanctions. In addition, the EU – in concert with Turkey and Russia – is also moving beyond merely talking about keeping trade with Iran alive, and is creating something called a Special Purpose Vehicle for firms investing in Iran. Whatever the eventual outcome, far bigger forces are driving up the price of petrol at the pump here than the piddling contribution that our regional and government fuel taxes will be making to it.

Footnote. Trump’s demonizing of Iran is absurd. For two decades, Saudi Arabia has been the Middle East’s prime aggressor and exporter of terrorism. The Saudis (a) founded and funded Islamic State, the al-Nusra Front and al Qaeda (b) created the horrifying humanitarian catastrophe in Yemen and (c) sought to de-stabilise Qatar and stop Al Jazeera from reporting on the region’s corrupt elites. The Saudis now seem hellbent on digging a canal and turning Qatar into an island.

So who is the best hope of ridding the world of Trump? Over the past six weeks, Massachusetts senator Elizabeth Warren has emerged from the pack as Trump’s likely Democratic rival in 2020. While Warren may seem an easy target for Trump to caricature – she’s a former academic and East Coast liberal – the policy platform she is putting together is targeting some genuine Republican areas of vulnerability.

Warren is not offering the left’s usual solutions i.e. new and costly government programmes to compensate those left behind by unfettered market capitalism. Instead, and as set out in the Accountable Capitalism Act she launched in August, Warren aims to rein in those market forces. In future, large firms and multinationals will no longer be able to act as sociopaths with no obligations to anyone (or anything) but their own shareholders. Here’s Vox’s Matthew Yglesias:

Warren’s plan starts from the premise that corporations that claim the legal rights of personhood should be legally required to accept the moral obligations of personhood. Traditionally, she writes in a companion op-ed for the Wall Street Journal, “corporations sought to succeed in the marketplace, but they also recognized their obligations to employees, customers and the community.” In recent decades they stopped, in favour of a singular devotion to enriching shareholders. And that’s what Warren wants to change.

Around the world, the wreckage left behind by this unrestricted devotion to shareholder enrichment has carved out a lot of political room for governments playing a bigger role. Locally, journalist Max Rashbrooke has just written a book about this change.

At this week’s post-Cabinet press conference, Bernard Hickey raised this very issue with Acting PM Winston Peters, in relation to recent actions by Air New Zealand. This exchange addresses the problem that Warren is seeking to address: namely the socially destructive consequences of putting shareholder wellbeing on a pedestal, above all other considerations :

Hickey : Do you think Air New Zealand has pursued profitability at the expense of some of its service levels or its ability to service regional areas?

Acting PM: Well, I don’t think they’d deny that, and I don’t think that they are to blame, solely, for that. There’s not a clear understanding in this country that for an airline to work it has to have, sometimes, non-profitable lines.

How does Warren seek to bring about change? Firms with an annual turnover above $1 billion will be required to register as United States Corporations and obtain a federal charter of corporate citizenship:

Warren wants to eliminate the huge financial incentives that entice CEOs to flush cash out to shareholders rather than re-invest in businesses. She wants to curb corporations’ political activities. And for the biggest corporations, she’s proposing a dramatic step that would ensure workers and not just shareholders get a voice on big strategic decisions. Warren hopes this will spur a return to greater corporate responsibility, and bring back some other aspects of the more egalitarian era of American capitalism post-World War II — more business investment, more meaningful career ladders for workers, more financial stability, and higher pay.

This charter won’t simply consist in warm and woolly good intentions. Under the charter, United States Corporations will be required to allocate 40% of seats on their board to workers, roughly in line with Germany’s ‘co-determination’ rules for business. Also, 75% of the board and 75% of the shareholders will have to endorse the firm’s political activities and donations. Furthermore, CEOs and other executives whose pay includes share packages will face constraints:

One [aim] is to limit corporate executives’ ability to sell shares of stock that they receive as pay — requiring that such shares be held for at least five years after they were received, and at least three years after a share buyback. The aim is to dis-incentivize stock-based compensation in general as well as the use of share buybacks as a tactic for executives to maximize their one pay.

To use the terminology of the economist William Lazonick cited by Matt Yglesias in his Vox article, the shift has been from the “retain and re-invest” approach that capitalism used to profess. From WW11 until the 1970s, firms largely observed a social contract that saw them re-invest their profits back into wages, and into the firm’s further research and development. “Yet since the Reagan era, business has increasingly followed a “downsize and distribute” regime of reducing costs and then distributing the freed-up cash to financial interests, particularly shareholders.”

That pathological focus on shareholder enrichment is what Warren sees as essential to change. Not only does it drive down wages and conditions, it valorizes business practices harmful to consumers, and to the planet :

For executives to set aside shareholder profits in pursuit of some other goal like environmental protection, racial justice, community stability, or simple common decency would be a form of theft. If reformulating your product to be more addictive or less healthy increases sales, then it’s not only permissible but actually required to do so. If closing a profitable plant and outsourcing the work to a low-wage country could make your company even more profitable, then it’s the right thing to do.

Sure, such practices do have to be legal. But as Yglesias points out, business lobbying largely determines what form our laws and regulations do take. And since only very few Americans – or New Zealanders – invest in the share market, a business culture that prioritises shareholder enrichment above all else has acted as a funnel for wealth concentration, and for income inequality.

Finally… on the politics of it, Warren is choosing to position herself in an interesting way via a vis Trump. Her proposals do not rely on vast spending programmes to re-distribute wealth. Her targets are wealth concentration and monopoly/monopsony power. As such, they will affect only the very rich, but will do so dramatically. In terms of the culture wars, you could even say that Warren’s plan is all about Making America Great Again. Trump could have his work cut out arguing against extending worker power to the boardroom, curbing the power of corporations, boosting wages and re-investing in communities.

Footnote : As mentioned Matt Yglesias in Vox has the best account of the Warren plan. Franklin Foer has interviewed Elizabeth Warren about her approach to corporate reform, for Atlantic magazine. And Jonathan Chait – in an article headlined “How Elizabeth Warren is Dominating The US Presidential Race” – has outlined the political strategizing behind Warren’s looming conflict with Trump:

Warren is running on a progressive platform that, if enacted, would sharply curtail political and economic inequality. But unlike [Bernie] Sanders, she is building a profile designed to compete for swing voters also, rather than solely to inspire progressive activists.

Over the past 20 years, about the only thing stopping Robyn from becoming an intergalactic superstar has been the infrequency of her releases. It’s been nearly ten years since the Body Talk albums came out, and despite several rewarding collaborations subsequently with the likes of Royksopp, little in the way of new material has emerged. Earlier this year, the “Missing U” single showed she is about to address that issue, but that track was more a reminder of past glories than a new direction. The “Honey” single (released only yesterday) seems more like it: