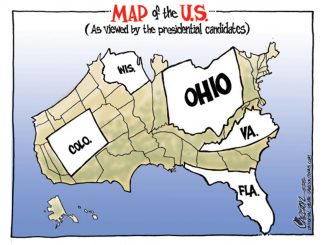 After the bizarre events this week in Helsinki, the world will be hoping and praying that the US midterm elections in November can put a restraining brake on the presidency of Donald Trump. This may happen, but there’s a highly undemocratic reason why such hopes may be frustrated. Despite all its fabled checks and balances, the US political system has a chronic problem that’s getting worse. With the exception of two small states (Maine and Nebraska) the US doesn’t operate a proportional voting system in its elections, and that flaw can have major repercussions. It explains how Trump could win the presidency in 2016 while losing the popular count by three million votes. Similarly in 2000, Al Gore beat George W. Bush on the popular vote and – for a variety of reasons, including political bias by the US Supreme Court – Gore still lost the presidency. (As a result, the world got the disastrous Iraq invasion in 2003.)

So it goes. In 2004, Bush won the popular vote by three million, yet won the presidency only very narrowly. (If John Kerry had got only 60,000 more of the 5.6 million votes cast in Ohio in 2004, he would have won the White House.) Currently, how is this flaw playing out in the context of the midterms? Well… thanks to a combo of (a) electorate gerrymandering (b) the particular seats up for grabs this year and (c) yes, the damned lack of proportionality, the Democrats could win the popular vote by 5 or 6 points in November, pick up 22 seats in the House of Representatives and one extra seat in the Senate, and yet still see both chambers remain under the control of the Republican Party.

This week, the Democrats have about an 8 point lead and that gap has been widening again of late, after contracting to only three points at the end of May. It is still a long way to November. True, the Democrats can point to some encouraging signs: in polling, it leads handily on motivation/intention to vote, and the Democrats have also out-performed the polls in several of the Congressional contests that have been held over the past twelve months. Point being though, the Democrats will need to maintain a significant polling edge, given how thoroughly the voting system is skewed.

There are several glaring problems with the US voting system (a) the antiquated, deliberately rundown voting machinery and (b) the distorted way that electorates have been designed to dump opposition voters into “safe” seats and exclude them from seats that are likely to be in play and (c) the methods that Republican state legislatures are using to disenfranchise eligible voters likely to vote Democrat. In a ruling that will inspire copycat actions by other states, the conservative Supreme Court has just upheld Ohio’s actions to remove many eligible voters (most of whom are disproportionately poor and African-American) from the voting rolls.

Those important factors aside, the core problem remains the lack of proportionality, epitomized by the reliance on the Electoral College (whereby states are allocated “electors” on a population basis along with two additional electors per state) as the method by which presidents get elected into office. There are formidable – and virtually impossible – political barriers to abolishing the Electoral College system, which is entrenched in the US Constitution. Here’s the main problem:

[The Electoral College] It is the product of an 18th century compromise forged over issues that no longer apply and resting on assumptions about the wisdom of the average person we no longer hold, and it has not worked the way it was intended almost from the very beginning. But abolishing it through a constitutional amendment is generally considered a non-starter — it would require either a two-thirds vote of both chambers of Congress or a constitutional convention called by two-thirds of state legislatures just to propose such an amendment, and then it would need to be approved by three-fourths of the states…

In today’s polarised world, that level of bi-partisan agreement would be highly unlikely – at least until such time as a Republican wins the popular vote and loses the presidency. However, this is a simpler solution. The states themselves could agree to award their electors to the winner of the popular vote:

Ten states plus Washington, D.C., have enacted legislation that could lead to a system that leaves the Electoral College intact but ensures that it deliver the presidency to the popular vote winner. This national compact stipulates that as soon as states comprising a majority of the Electoral College — 270 votes — sign on, each will award its electoral votes to the winner of the national popular vote. The Constitution allows states to allocate their electors as they choose — the winner-take-all system is not in the Constitution, and Maine and Nebraska have already abandoned it, choosing to split their electoral votes based on who wins in each congressional district… The 11 jurisdictions that have signed on total 165 electoral votes, nearly two-thirds of the necessary total.

That movement is still some way short of the 270 votes needed. In the meantime, the Electoral College system continues to display one of the worst aspects of the now-discredited First Past the Post system that we used to have in New Zealand: namely, US elections are won and lost on a very small number of state contests that effectively decide the outcome for everyone else. In the US, the same 14 “battleground” states decide election after election. They get the vast bulk of the campaigning and party resources, while the rest of the country is largely taken for granted. If you’re really worried about Russian hackers meddling in US elections, it really doesn’t help matters that the US has devised a voting system whereby the hackers need only concentrate their efforts on the handful of states that will decide the outcome.

Every four years, the presidential election “focuses on 14 [swing] states, to the total exclusion of the rest of the country,” says [Harvard law professor Lawrence] Lessig, …”Those 14 states are not representative of America. They’re older, whiter and their industries” like mining and farming “are representative of 19th-century industries.”

That used to happen here, too. One of the great features of MMP is that it makes every vote count, and not mainly those in the marginal seats that swing the overall outcome. In the US, the relevant trend lines are getting worse, if anything.

Here’s why. As Slate magazine recently reported, the real threat to the US isn’t Russia: it’s the political right, which is unfairly empowered by the American voting system. Paradoxically, as Americans converge on urban centres, those cities and populous states are becoming less important electorally, relative to the de-populating rural areas that – if the Electoral College system is not changed – will hold an increasingly lopsided amount of political power. In the process, the few will receive more power to dictate to the many – and by all available measures, the dwindling populations in those increasingly powerful rural and provincial voting areas will be disproportionately old, male, white and conservative.

Norman Ornstein, a resident scholar at the American Enterprise Institute, recently brought some attention to a growing threat to the integrity of our elections. “By 2040 or so…. 70 percent of Americans will live in 15 states. Meaning 30 percent will choose 70 senators. And the 30% will be older, whiter, more rural, more male than the 70 percent.”

This trend has some alarming implications:

In short, beyond holding an advantage in the House even before the recent wave of Republican gerrymandering, the most conservative regions of the country—places more white, more male, and more rural than the country at large—have and will continue to hold a lock on the United States Senate that will grow ever more absurd as the country’s actual population centres grow, a situation that grants them a veto over legislation that the majority of Americans might want, and the power to shape or shrink government programs and initiatives disproportionately needed by women and minorities living in less conservative states.

The unbalance of this undemocratic process is already evident:

However, it should be noted that this same analysis suggests that the key difference in the relative value of each vote may be voter turnout, rather than the population factor. (Meaning: voters in Oklahoma receive disproportionate power in the Electoral College in relation to their low voter turnout even more so than the disproportionate power they enjoy thanks to the state’s low population.)

If that’s truly the case, that recent Supreme Court decision to depress voter turnout by giving states (eg Ohio) more power to strike eligible voters off the rolls looms even larger in the scheme of things. Especially if that Ohio decision is read in conjunction with the Supreme Court’s equally heinous decision in 2013 to remove a key protection for poor and African American voters formerly enshrined in the 1965 Voting Rights Act, which had been the main legislative achievement of the US civil rights movement.

In sum, if the world is worried about Trump, it should also be worried that the US voting system (helped along by the Supreme Court) is working very hard to give an unequal edge to his supporters at the ballot box. And that situation will endure, long after Trump himself is gone.

Talking of political rights and ethnic minorities… Reportedly, Mala Rodriguez has been a Spanish rapper and singer for nearly 20 years. She’s from the Andalucia region of Spain and is also part gitana, or Romany/gypsy. On this fierce track, she blends hip hop and flamenco (and, I guess, Romany tradition) in really interesting ways, in the process of celebrating her heritage and issuing a call for feminist self-reliance: