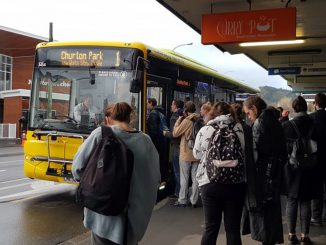 In defiance of political correctness, Wellington has just deployed a bus system that’s seems designed to drive people off public transport. As befits the art capital of New Zealand, this new system poses a spiky postmodern challenge to bourgeois notions of “service”. Not for this cool city the mundane traditions of Italian realism, which boringly made sure the trains ran on time. Instead, Wellington now offers more of a Samuel Beckett experience: waiting for a bus that never comes is surely a poignant signifier of much else that’s lacking in modern society. At the bus stop as elsewhere, we can but yearn to be transported.

That aside, and despite the excuses about teething problems and how we should be grateful a bus service of any sort is still being delivered – at higher fares – one has to question the wisdom of launching a new network (a) at the height of mid-winter (b) before all the hubs central to this new system had been built and (c) right in the middle of an industrial dispute that required bringing in out of town drivers some of whom (d) didn’t know how to get where they were trying to go, even with GPS.

Is the result a better, safer, cheaper, quicker and more convenient service than what it replaced? You must be kidding. This has to be the only public transport network in the developed world that formally – online – suggests you take a 13 minute walk uphill as a part of the new service that replaces a bus that previously used to drive you all the way there. Just a thought: is a hub, spoke and transfer system suitable for a small, relatively compact city like Wellington ? Sure, they use it elsewhere, but mostly in cities five to ten times the size.

By now, everyone has their own “What are they thinking?” examples. Briefly, here’s two. Bus 18 used to take students along the Miramar/Newtown/Mt Cook line to and from the university. This now operates only between 7-9am, and 3-5pm because – hey – everyone knows that students start studying at 7am, and never work at night. Any female student working until say 10pm in the university library is now being seriously invited by Metlink online to take a 10-12 minute walk in the dark towards town to catch a bus home.

Paradoxically, there is actually a bus at 10pm, but you need to know beforehand that it will deliver you to the railway station (also a less than salubrious place to hang around at 10-11pm) from which you can then catch another bus south from there. Weirdly, this option doesn’t show up at all online if you merely type in (as invited) a Victoria Uni to Newtown desired route.
Good work people! You’ve devised a less safe, less convenient service that, for a vulnerable, non-affluent part of the community, is available only at the times of the day when it is least likely to be used by them.

Which brings me to my other example. Formerly there was such scant demand for links between say, Newtown and Brooklyn/Kingston that only an infrequent, half-sized bus more than coped. Now, a surfeit of full size and even double decker buses have been assigned to ply this route – they’re usually all but empty – while local residents queue to jam onto the formerly plentiful buses downtown, which is where more of them want to go, but on routes on which buses now run less often, and less quickly. Good work, people! Again, you’re putting people back in cars, and curing them of any inclination to rely on public transport.

And in that perhaps, may lie the answer. If neo-liberalism has taught us anything, it is that the quality of a public service must first be reduced so that long term economic goals can be met. Once a service has been sufficiently degraded and demand has fallen away, services and labour costs can then be cut further, and victory declared. See, we’re turning a profit now, and don’t worry because a form of service – however abysmal – still remains for the wretches who need to rely on public transport.

If we choose to take that “no more money exists for the nurses” stance seriously – which is hard, given the relatively small amount required to meet the remaining points at issue – then maybe we could look elsewhere in the system. Perhaps acting PM Winston Peters, fresh from his victory over the Australians on that detention issue involving the Kiwi teenager, could be persuaded to revisit the money we spend on providing healthcare and welfare benefit to any Australians unlucky enough to fall on hard times here. We continue to offer that assistance even though New Zealanders do not qualify for the same benefits across the Tasman, even after living there and paying taxes for yonks.

Maybe we should level the playing field and re-direct the money to the nurses. Or even better… we should just pay the money required (a) to provide safe staffing levels (b) to attract new recruits into nursing and (c) to retain the nurses that we do train.

Talking of the nurses… About 20 Army nurses helped to ensure that emergency services were maintained during the recent strike action. Pathetically, National’s Heath spokesperson Michael Woodhouse decried this as evidence that the government had “lost control of the health sector” thanks to the official “mishandling with [sic] nurses who have roles and responsibilities elsewhere”. Leave aside the fact that the crisis in nursing is a direct product of the National government’s years of neglect. One has to wonder how National thinks it would have responded to the nurses’ decision to strike – by outlawing the strike action entirely as an intolerable threat to public order? By not bringing in the Army nurses at all, regardless of any potential risk to public safety?

On balance, calling on the Army nurses was a good thing, if only because it freed up more public health nurses to join the picket line. The downside, as nursing advocate Danni Wilkinson of the nurses Facebook group told RNZ this morning, is that the emergency service provided during the strike action was probably safer than the staffing levels on many wards during business-as-usual days and nights in our health system.

What the government seems to be hoping for is that public sentiment will turn against the nurses, and that in the meantime, the official hardline will deter the teachers – who are watching from the sidelines and weighing the role that industrial action may be required to play in the resolution of their upcoming pay claim.

In fact, dragging out the nurses dispute is of no use to anyone. Ultimately, the government’s stubbornness is only heightening the political fallout it will suffer when (inevitably)it caves in and pays the relative pittance still required to bridge the positions, and make the dispute go away.

Madonna recently turned 60. I’m more interested in why one of the people she inspired (Lady Miss Kier of the band Deee-Lite) never became an international star. In any line from Sandra Bernhard and Madonna to Lady Gaga, Kier is the missing link, and was at least a decade ahead of her time. Kier’s ability as a singer, dancer and star presence is evident even on this dodgy clip of the group’s biggest club hit “Groove Is In The Heart”.

On this clip, the debt that Kier owed to Sandra Bernhard is obvious:

And here, 40 years ago in a time capsule trip, are Madonna and Bernhard being queens of all they surveyed on the Letterman show, way back then: