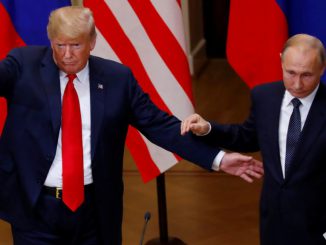 Decades ago a US political cartoonist conveyed a key problem with journalism as we know it. Basically, the illustration showed a male reporter leaping out of bed and lacing up his shoes, while overhead a sky full of missiles marked “Political Spin” streaked onwards to their target. The cartoon caught journalism’s key dilemma… that by the time it can respond with qualifiers and researched rebuttals, the spinmeisters have already hit their target, and done the damage. Helped on by the fact that passive reportage provided the platform and the megaphone for the lies that the journalists must now attempt to undo.

Pointless though such corrections may be, the job still needs to be done. For example, and just before the NATO conference in Brussels last week – which is, I know, almost prehistoric times in the context of a 24/7 news cycle – there was Trump righteously lambasting Germany for its alleged dependence on Russia oil and gas (“They’re getting 60 or 70% of their energy needs from Russia”) at the same time that Germany was asking NATO to defend it from Russia! As in:

Germany, as far as I’m concerned, is captive to Russia because it’s getting so much of its energy from Russia,” [Trump] said. “So we’re supposed to protect Germany but they’re getting their energy from Russia.”

In fact, as Juan Cole has pointed out, 41% of Germany’s energy needs actually come from renewables (wind, solar, biomass, hydro) and this figure is on track to reach 50% by 2030.

Meanwhile, the German government says it gets only 9% of its energy needs from Russia, not 70%. Yes, it has important energy links with Russia. But “captive?” Hardly.

True, if you do tally all the defence spending of all of the NATO allies, then the US would account for about two thirds of that aggregate, but this reflects the cost to the US economy of it maintaining its military bases and force projection capacity all around the world, the Asia-Pacific included. Comparing that US global spend to what NATO spends in Europe is a false comparison. Even then, Trump’s demand that NATO countries should each spend 4% of their GDP on defence is totally excessive, given that the US donates only 3.3% of its GDP to the Pentagon.

To Vladimir, with Love

Tough on Europe over trade, at the G-7. Tough on Europe over defence, at NATO. And utterly smitten as usual by Vladimir Putin at the Helsinki summit. Hard to pick what the weirdest aspect of this meeting was – was it Trump winking at Putin, the praise for Putin’s reliability, the green light given by Trump to Russia’s policies in Syria… or was it Trump’s failure to even mention the Crimea or Ukraine or the Skripals? Tough call, but my bet for the most bizzarro moment came when Putin offered Russian investigators to help out with the probe into Russia’s role in the 2016 US election, an offer that must rank alongside OJ Simpson’s pledge to find the real killer. Trump welcomed it, of course.

To the dwindling few who still profess to believe in this Trump /Putin liaison, it will be seen as being all about forging good relations with Russia, and negating the vested interests of the Deep State (and Crooked Hillary!) in maintaining the antagonisms of yesteryear. WelI, if there were genuine trade-offs involved that might be a defensible argument. Yet Trump’s concessions (and his apparent inability to even comprehend the issues on which he is conceding) have made this a one-way street for Putin, as it was recently for Kim Young-Un as well. Meanwhile, Kim is quietly cranking up his nuclear capability.

We’re not immune to the same ‘down the memory hole’ politicking, of course. Thankfully though, its usually small potatoes by comparison. This morning’s testy RNZ exchange between acting PM Winston Peters and Guyon Espiner provided an example where (apparently because he felt crankily irritated with the question) Peters feigned being unaware that former UKIP leader Nigel Farage had likened him to Trump, and even denied seeing the relevant programme. Now, Peters is not a Trump, or a Farage. But for the record, what Peters said on RNZ is not what Peters said at the 2 July Post-Cabinet press conference, when the same question was put to him:

Media : Mr Peters, how do you feel about being called New Zealand’s own version of Donald Trump by Nigel Farage?

Acting PM: Well, I noticed the medium that carried that.

Media: He’s a friend of yours, right? How do you feel about being called the New Zealand’s own version of Donald Trump?

Acting PM: No, no, no—look, excuse me. What I saw was a campaign that was opposed by all the multinational wealth in the world in Europe, including intervening countries from outside, get beaten by the people’s voice—that is, to speak, ordinary people all around the UK who, up against a lot of money, nevertheless had their democratic expression. In that sense, I understand what Mr Farage was saying…

Interesting that even then, Peters chose to respond to the Trump comparison by swivelling back to Farage and Brexit – which he portrayed as something brought about by “ordinary people all round the UK, up against a lot of money…” Given what we now know, this is fatuously ingenuous. The big international money poured into swaying the Leave vote – let alone the blatant lies and false assurances that accompanied it – are all pretty apparent.

Months before the United States narrowly elected Trump, the United Kingdom narrowly elected to withdraw from the European Union. Both votes advanced Russian foreign policy goals — in the latter case, by splitting up the Western alliance. (Trump has energetically pursued this strategy, too.) Russia employed many of the same tools to influence both elections. It deployed social-media bots and trolls to spread its message. It recruited friendly candidates who gave voice to previously marginal Russophile positions. And, as the newly surfaced evidence suggests, it indirectly financed the campaign.

British magnate Arron Banks supported the Brexit campaign with the largest political donation in British history. Leaked documents obtained by British reporter Carole Cadwalladr suggest Banks had more than mere philanthropic motives for this donation. Banks met several times with representatives of the Russian government, contradicting his previous claim to have met with Russians just one time. More significantly, the documents suggest the Russians dangled a lucrative business deal. He would have the chance to buy in to a gold-mining consolidation, “potentially netting a profit of several billion dollars.”

Similarly, if you’re inclined to follow the journalistic trail… sometimes the persistence pays off. To take just one example among many: Back in January, the McClatchy news service story carried a story about the Russian influence trail involving Russian mobster/banker /money launderer Alexander Torshin and his special assistant, Maria Butina.

Last week, this trail culminated in US Justice Department charges being laid against Butina, accusing her of being an agent of the Russian Federation operating in the United States.

Here, for the conspiratorially inclined, is the time frame and further details, including the links between Torshin/Butina and the NRA, which reportedly donated $30 million to Trump 2016, at a level 3x what it spent on Romney 2012. This Time magazine story also details the links between Butina and the NRA, and includes a 2015 exchange between Butina and Trump, in which Trump mentioned that if elected, there’d be no need for sanctions on Russia.

All of this is not to suggest that Russia influence was the cause of Trump being elected. Yet the evidence that Russia did meddle in the US election of 2016, with the aim of seeing Trump elected is now substantial, and undeniable. As is the subsequent agenda of Trump to break up the Western alliance in Europe –on trade and defence – which is something of direct benefit to Putin.

Footnote: If the Republicans are worried, disturbed and distressed about Trump’s disastrous foreign policy adventures and apparent collusion with Putin, when are they going to start voting against him in Congress on anything that’s substantial? Maybe – crazy notion – they could cease blocking attempts to force the release of Trump’s tax returns?

And since the Trump/Putin mindmeld occurred in Finland, here’s a fitting slice of terrible Finnish pop metal:

Also… talking of things terrible, here’s Ariana Grande doing unspeakable things to a hurricane, while straddling the entire world… but that said, the prairie dogs in the video perfectly express the global reaction to what went down in Helsinki…