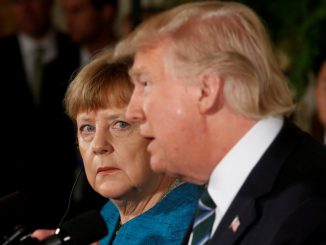 For someone routinely cast as a clown presiding over an administration in chaos, Donald Trump has been very consistent about his agenda, and remarkably successful in achieving it, in the short term at least. By now, it seems clear that Trump has absolutely no interest in retaining any vestige of the post WW2 architecture that ties the US into a collective agreement. In his hands, isolationism means being free to use American power against friends and foes alike.

To that end, the US has bailed/is bailing from the United Nations and its human rights council, is exiting/has exited from global pacts on climate change and multilateral trade (NAFTA, TPP) while also crippling the World Trade Organisation’s appellate system in order to end its ability to pass judgment on US business practice. Trump has also bailed from the Europe/US pact to limit Iran’s nuclear proliferation, with the result that he is now well down the track to de-stabilising Iran’s economy – mainly, by threatening anyone (New Zealand included) who dares to conduct trade with Iran, or import its oil. (The Rial is now plunging, inflation is rampant, and protesters are once again taking to the streets of Teheran.)

This global vandalism is a mirror of his domestic agenda, which has targeted existing regulations on banking, oil exploration, pharmaceutical testing and pricing, and environmental and consumer protection – while simultaneously ditching any pretence about having a progressive taxation system. Don’t mention gun control, either.

So….it shouldn’t be much of a surprise if next week’s NATO meeting in Brussels turns into another Trump-engineered clusterfuck. The damage Trump deliberately did to Europe’s economic solidarity at the G-7 meeting in Quebec in early June is likely to be repeated over Europe’s defence arrangements. After the G-7 debacle, Trump headed to Singapore to flatter the North Korean dictator Kim Jong-Un. Similarly, after the NATO gathering ends in a shambles next week, Trump has a similar summit lined up with his best pal, Vladimir Putin. The resulting lovefest is likely to leave the world nostalgic for the relatively restrained days when George W. Bush could claim to have looked into Putin’s eyes, and seen his soul.

For Putin, Trump is the gift that keeps on giving. It would be bad enough if Trump was just disinterested in maintaining the US/Europe economic order and its defence arrangements, but his version of US isolationism sees virtue in actively breaking them up. Hey, and if the result of Trump’s actions is a Europe divided and ruled by a bevy of extreme Christian populists and white nationalists made in his image, then all well and good. That aspiration explains Trump’s personal disdain for the leaders of the European Union and his open admiration for the likes of Putin, Kim, Nigel Farage and Marine Le Pen. Given his open hostility to Germany’s Angela Merkel, he will seeking to engineer her failure in Brussels. After all, if Merkel’s fragile coalition should finally fall apart over the immigration issue, this will be trumpeted as a validation of America’s brutal treatment of the migrants and asylum seekers arriving on its own borders.

On NATO, Trump is – ironically – amping up some of the same irritations felt by his predecessor. Mid-June, the Spectator magazine recalled how Barack Obama famously complained about “the Europeans and Arab states holding our coats while we did all the fighting.” Even if this complaint was historically tone deaf (eg, WW2) the Spectator also noted this situation:

Each of the 29 Nato members agrees to spend 2 per cent of its economic output on defence, but only four do: Greece, Estonia, the UK and the US. Germany, the richest country in Europe, spends just 1.2 per cent of its GDP on defence. Angela Merkel’s offer to raise this to 1.5 per cent is still seen by Trump (and her own defence officials) as insultingly low. Together, European governments are saving about £140 billion by skimping on defence. They do so in the knowledge that the hole will be filled by Uncle Sam.

Next week – and for a whole slew of reasons – Germany will become a special target of US ire. Here’s a few reasons why:

While defence is a low priority among a largely pacifist German public, mindful of their country’s history, a report for the German parliament earlier this year revealed the extent of the decay of its army, navy and air force. At the end of last year, the Bundeswehr had 128 Eurofighters, of which 39 could fly. It had six submarines, none of which were working when the report was compiled. Of its 13 ageing frigates, only five could sail. Of its 93 Tornado jets, 26 were ready for action. German air force trainees struggled to qualify because so few aircraft were ready for use.

Its staffing is also in crisis. Hans-Peter Bartels, armed forces commissioner to the German parliament, reported recently that 21,000 officer posts are vacant. ‘We spent 25 years cutting the defence budget,’ he said. ‘We thought everything could be solved through negotiations, agreements, co–operation and partnerships.’

Not any more, evidently. Unfortunately, any further attempt to appease the US President via belated promises to boost defence spending is likely to end in humiliation. That’s because NATO itself is the real target of next week’s White House bombing campaign in Brussels, with any subsequent fallout being quickly eclipsed by the media fixation on the Putin/Trump summit.

Like most of the European public, New Zealand will be watching on the sidelines and hoping for the best. In WW2, our soldiers fought in Europe and North Africa against exactly the same brands of national atavism that Trump seeks to unleash, again. In the process, the flawed mechanisms that kept an imperfect peace for the past 70 years are being deliberately dismantled. In the process, this will facilitate the personal enrichment of the family and friends of the two kleptocrats who currently rule Moscow, and Washington. Nothing much we can do about it though, as then-acting PM Winston Peters conceded a couple of weeks ago at the post-Cabinet press conference:

Peters: Well, look, we’re a small country way out here in the southern hemisphere. Do we have an interest? Most certainly so. Do we have an influence at that level? Not as much as we’d like. In the surrounding fundamentals, we believe in a rules based system, and that goes to where trade is concerned, obviously, in all aspects of international life. We will do our best to make our representations, but I wouldn’t think that we would have, in that specific debate—as to what they contribute to NATO as NATO members, we would not have influence on that, other than we are wrestling with our own situation where defence—

Campbell: But we wouldn’t want a wrangle over defence spending to upset the current [NATO] alliance— is that what you’re saying?

Peters: That’s what I think, yes.

Footnote: The Trump agenda might look contradictory – last week he tweeted one thing on Wednesday, and then tweeted on Friday that he’d ever said any such thing – but the man knows that the news cycle has come to accept, and to normalise, his foibles. The zigzags might look like he’s making it up as he goes along – and he is – but the end goal is very consistent. First threaten trade wars and tariffs with China, but then back off (a) if his family’s personal enrichment is at stake and (b) if China’s retaliation (tariffs on soybeans and other forms of farm trade) puts Republican farm states at risk in this year’s midterm elections.

Talking of which…the successful pressure to destabilise Iran – mainly by deterring foreign investment and taking Iranian oil off the global market – is also inconveniently driving up global oil prices in a way that’s likely to be reflected at US petrol pumps, which could also be damaging to the Republican cause at the November midterms. Solution: there’s always the option of invading Venezuela and releasing its oil onto global markets. This presidential thing is so easy, if you just keep your eye on the prize.

If the liberal elites think Trump is dumb, that’s fine by him. He has a personal distaste for them too, and for their social democratic leaders (Markel, Macron, May etc.) Guys like Putin and Kim – power players who break all the rules and make their own mark on history – are more his kind of guy.

Musically, here’s another rule breaker who breaks the rules in an entirely predictable fashion. For the best part of two decades, Andrew W.K. has epitomised a retro brand of good time rawk’n’roll… and here’s a fine recent example of what he does so well. Knows nothing, accepts that, and proud of it: