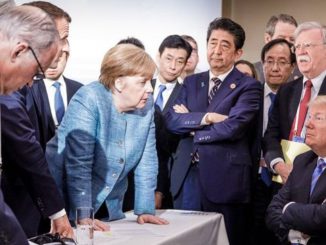 After shredding America’s relationships with its traditional G-7 allies, US President Donald Trump is about to sit down to pursue a ‘no nukes for lifting economic sanctions’ deal with North Korea – ie the same trade-off that Barack Obama signed with Iran, and which Trump has just torn up. In reality, North Korea has no intention of scrapping the nuclear weapons it regards as essential to the survival of the Kim regime. Regardless… for months, Trump has been claiming that North Korea will (or can be made) to de-nuclearise, and without prior military concessions on the US side. Meaning: the North Korea/US talks Singapore are based on an illusion. For months, the White House has been treating as a bargaining chip what North Korea sees as being an existential necessity.

In all likelihood then, this will turn out to be another media pantomine where Trump gets to play the US President, and Kim Young-Un will ultimately be cast as the villain, who acted in bad faith. Once again, the media will have helped to perpetuate the fiction that there is something of substance to report here.

This reflects an interesting dilemma for the media when it comes to co0vering the Trump presidency. By now, everyone knows that Trump lies repeatedly about every aspect of his job, yet the media is locked into its appointed role of prepping and promoting the next round of presidential whoppers. It is as if the media has got trapped in an episode of a futuristic TV show like Black Mirror, or a film like Memento. Journalists get up every morning with their memories apparently erased of the last litany of Trump lies, and ready themselves to prep the public for the next presidential pageant, as if these events contain something of substance.

Or as if the main participants have other things on their minds besides their self-aggrandisement and/or the personal enrichment of themselves, and their family. Last month for example, the abrupt (and temporary) change in the US trade stance towards China appeared to be being driven entirely by Trump’s desire to advance the business interests of himself and his daughter.

True, to maintain its sense of propriety, the media does subsequently fact check many of Trump’s utterances. Yet putting the record to rights afterwards is somewhat beside the point, when the Trump circus has already moved on to the next event, the next platform, and the next audience of rubes. For the record though, from last weekend: Trump can hardly accuse Trudeau of ‘ bad faith’ on trade issues when in the same context the US is also claiming (with a straight face) that the Canadian steel and aluminium exports at issue pose a significant threat to the national security (!) of the United States.

Also: Canada’s dairy farmers are hardly a dagger aimed at the heart of the US farm trade, either. In reality, the balance of North American dairy trade is in the US favour. It is the US, not Canada that is less open to dairy imports:

….Trade data flatly contradicts the claim that Canadian supply management is ravaging US dairyland – either because it unfairly restricts imports or because it dumps a subsidized surplus in US markets. In 2016, Canada imported dairy products from the US worth five times more than the small amount it exported there….Canadian farmers point out that despite the tariffs that protect them, imports make up 10% of the country’s dairy consumption. By contrast, the US restricts dairy imports to 3% of domestic consumption.

In sum, Justin Trudeau is the least of the threats facing the global trading system. Right now, Trump is waging four major trade wars, all at once. Namely:

War 1: with China over the US trade deficit and over China’s trade practices.

War 2: with Mexico and Canada over NAFTA.

War 3: with America’s European allies and much of the rest of the world over steel and aluminum.

War 4: with the World Trade Organization over its rules for policing trade disputes

In recent weeks, some US journalists have been engaged in a philosophical discussion as to whether Trump actually tells “lies” (as some journalists prefer to call them) or whether he engages instead in “demonstrable falsehoods” as Maggie Haberman of the New York Times prefers to call them. The difference is one of demonstrable intent – basically, to be called a liar you do have to know that you’re lying. Does Trump knowingly and deliberately lie in the full awareness that what he says is untrue and misleading – or is he chronically so careless with facts that the categories of “lies” and “truth” simply do not apply to him? Furthermore, is there a threshold where you’re so careless with the distinction that the failure to envisage a line between truth and deception becomes culpable?

The important thing about Trump’s habit of lying isn’t that we use the word lie; it’s that we remember that he is a liar the next time he goes and says something. After all, presidents say things all the time that outsiders cannot immediately verify or debunk. Most presidents, through their habit of mostly not lying, earn the right to the benefit of the doubt in such cases. Trump, with his habit of constantly offering demonstrable falsehoods, has earned the opposite.

Besides, there is the problem of holding Trump to account for all the things that he said he’d do, and didn’t, and these are legion. Are unkept promises also to be regarded as “lies”? And should that be at the point of utterance, or only afterwards?

Trump frequently makes representations about things where it’s simply not possible to immediately know for sure whether he’s telling the truth, typically because they refer to his private plans or activities. As president, for example, Trump has said that he would develop a plan to provide every American with health insurance, that the North Korean government had agreed to denuclearize, that he would promote a “bill of love” to help DREAMers, that he would take on the National Rifle Association to reduce school shootings, and that he

would develop a tax plan that rich people would not benefit “at all” from. None of this was true. Critically, none of it was demonstrably false at the time Trump said it. But equally critically, a reasonable person would have known better than to believe in any of it because Trump lies all the time.

Yet the troubling thing about media coverage of Trump isn’t that the press has failed to label lies as lies once they are proven to be lies. It’s that these kinds of statements continue to be taken at face value when they are made, as if they were offered by a normal, reasonably honest person. But Trump is not a reasonably honest person. He is someone who flings around unconfirmed accusations and demonstrable falsehoods with abandon — and who does so, by his own admission, for calculated strategic purposes.

While we can’t stop this process, we don’t need to be naïve about the utterances of a serial liar either, Yglesias concludes. So, with that in mind, what should we be making of the talks this week with North Korea? On past Trumpian performance, we know North Korea will eventually be blamed for acting in bad faith, and/or for being intransigent. (At best, Singapore will deliver only a promise for the two sides to keep on talking.) It will be great theatrics for Trump, whatever. It will be historic, unprecedented, a fantastic opportunity for the world etc etc. Oh, but we also know beforehand that North Korea will not ever give up its nuclear weapons. We knew that for certain before the talks began.

So… what exactly then is the achievable goal from this week’s Singapore theatrics? Or is it the media’s role to simply be excited about being played by Trump – and about playing the public – all over again? As Michelle Wolf pointed out a few months ago, Trump does attract a lot of lucrative eyeballs to the media’s offerings.

Talking of self-deluding bullshit artists… with good reason, almost everyone had written off Kanye West in the wake of his abysmal Ye album and recent utterances. Yet this single with Kid Cudi (and title track from their album together) marks a genuine return to form…