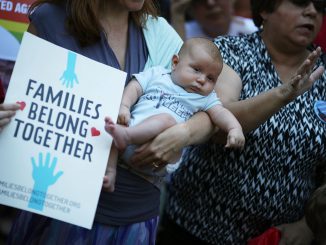 The images of family separations and children in cages along the US southwest border have been horrifying, and it came as no surprise that the rationale by US President Donald Trump’s for this policy has been so racist, and highly misleading. For months, Trump has been likening refugees to vermin who are about to ‘infest’ America. “Caravans are headed here,” Trump said. “Deadly ravages of drugs, gangs and crime are pouring across our border, while legal loopholes allow in murderers and thieves…who have transformed once-peaceful neighbourhoods into bloodstained killing fields.”

This is lurid bullshit, intended to incite. In fact, the recent upsurge in asylum seekers – that began in February and has continued through May – is still running below the 569,000 figure recorded in 2014, and is only a fraction of the 1,643,679 people who sought asylum in fiscal year 2000, and without the US sinking under the weight. (The comparable figure for FY 2017 was only 303,916.) Moreover, the gang membership accentuated by Trump is only a negligible presence among the border arrivals:

Since the Trump administration took office, the Border Patrol has detected fewer gang members crossing irregularly than during the Obama administration. In FY2017, these detections amounted to 0.075 percent of the total number of migrants (228 MS-13 members out of 303,916 total migrants). When combined with MS-13’s rival, the Barrio 18 gang, the number rises only slightly to 0.095 percent. This is far from the “infestation” of violent gang members described by the President.

Plainly then, the US is not going to be over-run by refugees anytime soon. What has changed dramatically in recent years has been the point of origin of the border applicants. Back in FY2000, 90% of border asylum seekers were Mexican, and only one per cent came from the Central American triangle of Guatemala, Honduras and El Salvador. Now, those three countries account for close to 50% of those seeking entry to the US on the southwest border. The reasons for these people fleeing their homelands range from poverty, the persecution of LGBT people (264 LGBT people have been murdered in Honduras alone since 2009) and the imperative to escape from violence, extortion and the threat of the fleeing children being forcibly recruited into gang induction ( for boys) and prostitution ( for girls). Most of the Central American asylum seekers come from large urban areas controlled by gangs like MS 13 and Barrio 18, and increasing numbers of the asylum seekers are women:

The journey these women have made to reach the US border is perilous, and entails travelling through lawless parts of northern Mexico controlled by drug cartels :

A 2017 Doctors Without Borders report noted that 68 percent of the migrants that it provided services to in shelters across Mexico had been the victim of a crime during the journey. Women and children are also at particular risk, with nearly one-third of the women reporting that they were sexually assaulted during their trip through Mexico.

The main legal defence for the families being separated – or in the wake of the international outcry, being held in detention together – is a 1997 court ruling called Flores, which says that children cannot be held in detention for more than 20 days pending court action on their status. Here’s how the system used to work:

Before the Trump administration’s recent immigration crackdown, these families would be then taken to a family detention centre, where they would have to pass a “credible fear” interview to be released—that is, prove that they have a real fear of returning to their home countries. At least 77 percent of the families pass this hurdle and are released with an ankle monitor or after paying a bond. They can then begin their cases in immigration courts. The Trump administration is looking to shake up this system.

The ‘shake-up’ envisaged by Trump is premised on the assumption that the US authorities would probably lose any court challenge it mounted against the Flores decree. Therefore, Trump has tweeted this morning that the US should simply ignore the right to asylum and due process altogether, and should simply turn away all refugees turning up at its southwest border. In this tweet, Trump likened it to an invasion:

We cannot allow all of these people to invade our Country. When somebody comes in, we must immediately, with no Judges or Court Cases, bring them back from where they came. Our system is a mockery to good immigration policy and Law and Order. Most children come without parents…

This callous policy is not occurring in a vacuum. It mirrors the isolationist stance the Trump administration has adopted towards the world in general, and to migrants in particular. Europe and the countries bordering the Middle East have had to face a massive influx of refugees, many of them triggered by the US invasion of Iraq in 2003, and by subsequent conflicts in Libya and Syria in which US forces and allies have been heavily involved. Even so, Trump has opposed and mocked German Chancellor Angela Merkel over her country’s acceptance of Middle Eastern refugees, for whom the US appears to accept no responsibility whatsoever:

From [Trump’s] Inauguration Day to Dec. 31 2017 his administration accepted 29,022 refugees, the lowest number since at least 2002, according to State Department data. Comparable figures before then are not available… That decline will continue in 2018 because Trump instituted an annual cap of 45,000 refugees a year, the lowest cap since Congress created the Refugee Resettlement Program in 1980. Presidents have the authority to unilaterally set the annual refugee cap, which has been as high as 217,000 under President Reagan and hovered between 70,000 and 80,000 under the Bush and Obama administrations.

Incredibly… during the first quarter of 2018, the US accepted only 11 refugees from Syria.

In 2016, near the end of Barack Obama’s presidency, the U.S. resettled 15,479 Syrian refugees, according to State Department figures. In 2017, the country let in 3,024. So far this year, that number is just 11. By comparison, over the same 3 1/2-month period in 2016, the U.S. accepted 790. “We are seeing the impact of the Trump administration’s words and policy and actions,” says Noah Gottschalk, senior policy adviser at Oxfam America. “That slams the door on refugees, and Syrian refugees in particular.”

Footnote: This complete lack of compassion from the White House towards refugees is not merely a denial of everything that the Statue of Liberty represents. It also differs from the stance adopted by previous conservative Republican presidents, including Ronald Reagan. As a politician from a California heavily dependent on migrant farm labour, Reagan was able to recognise the positive contribution that migrant labour makes to the US economy. Check out for instance, these fascinating speech notes from a radio address that Reagan gave back in 1977.

Talkback radio being what it is, it hasn’t been surprising to find some on the lunatic fringe complaining that the prime ministerial baby is being hawked around for political gain. The reverse has been the case. At recent post-Cabinet press conferences – which is supposed to be where the serious political news happens – an awful lot of questions have been directed at Jacinda Ardern about baby-related issues, such as the baby’s name and related personal matters.

By and large, these were met with a polite, but gritted teeth response on her part. Safe to say, such questions were not encouraged. More justifiably, there were also a lot of gallery questions about the transitional arrangements during maternal leave. Less justifiably last week though, the gallery asked the visiting European Union’s Trade Minister Cecelia Malmstrom – at the launch of the negotiations on the EU/NZ trade deal – about what maternal advice she might have to offer to the PM.

Point being, only the minimum of the baby coverage has been initiated by Jacinda Ardern and her partner, and that mainly to feed the salivating media pack a few morsels to keep it at bay. The bulk of the coverage has been entirely media-driven, in imitation of British tabloid frenzies about celebrity births. This approach seems like an alien import to a New Zealand that’s usually more inclined to give new parents privacy, and sufficient room to adjust to the demands of a new baby. Winston Peters got the tone exactly right when he said the birth was a happy event, but not a historic one. Big deal for the people involved, no big deal for anyone else.

Can’t stop haters from hating, though. Yet… hopefully, today’s ghastly readiness by Simon Bridges (when urged on by Jeremy Wells) to make ‘joking’ references about pinko ideology and gender fluidity at the expense of a two day old baby, will be the absolute rock bottom of this commentary.

The title track from the new Neko Case album finds her in full Fiona Apple mode, both vocally and melodically – think of “Werewolf” from Apple’s last album. Yet the lyrics seem pure Case in that they’re elliptical, but fiercely felt:

My voice is a fracture
Of a shinbone’s lust
Pounding barefoot ground
It lifts you up and sits you just
Just at sorrow’s waterline….

The “Halls Of Sarah” cut is even more impressive. Here Case lays into the culture’s treatment of women rendered voiceless, objectified and condemned…

You are a silent movie, Sarah
Men build their industries around you
Diverting rivers of your hair
They’re looking for their own reflection
You’re left to die of exposure, Sarah….

Let her go, the light is fading
I cry like guns across the water
She didn’t ask to be your remake or your muse
We’re parasites inside her blues…