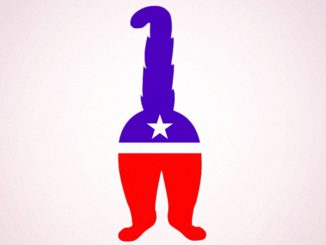 An interesting moral conundrum has arisen in the United States.

On the one hand we had their government (among other things) building special detention camps to hold asylum-seeking children they had separated from their asylum-seeking parents until those children could be adopted out by agencies run by government officials in their spare time.

On the other, an individual restaurateur politely declined to serve the chief apologist for that increasingly successful wannabe-totalitarian corrupt ethno-nationalist regime past the cheese platter.

Which is worse? Tricky. Judging by the reaction in the media commentariat and the higher echelons of the Democrat party, you might suspect the second incident – called ‘the death of civility’ for short – is the greater threat to the future of the Republic.

Part of the confusion is ‘civility’ is a rather broad term. It covers everything from using social cues to indicate your assent to the reciprocal norms that allow society to function, to reflexively simpering an apology when someone runs over your foot with a shopping trolley, to actually standing up for civil society, to not encouraging your followers to shoot bullets into other human beings because you don’t like that their job is tell the public about things that are happening.

Obviously these are all exactly the same thing and it’s very hard to tell which is more vital.

I wondered if history has the answers. Some, for example, have found guidance looking back over old news reports. But I find a greater truth in poetry.

I happen to have briefly owned a copy of TS Eliot’s extremely rare volume Old Possum’s Book of Practically Indistinguishable from Collaboration (the one that was later reimagined by Andrew Lloyd Webber as the musical Evita), which contains the following verse. Unfortunately the book perished when a skip it was in spontaneously combusted, so I quote from memory.

Civility’s the prime virtue: it really can’t be beat –
To fail to be pleasant is to court certain defeat.
I know that it requires restraint (they deal in hate, and fear):
But we shan’t get far – shall we? – if Civility’s not there!

Civility, Civility, we must maintain Civility,
Though those who we oppose display bewildering agility
Producing new outrages on our part out of thin air,
While in their own behaviour – Civility’s not there!
It may be hypocritical, it’s certainly unfair –
But we’ll never make them see that if Civility’s not there!

Civility is a good thing, it greases every wheel;
It’s well known among psychopaths for what it can conceal;
It will solve every woe, so it is all that we aspire to;
Along with due process (which they are also setting fire to);
And each chance that arises to bend over and be nice is
A show, from us, of strength – we’ve forced the moment from its crisis!

Civility, Civility, we must maintain Civility,
And pretend things are normal to the best of our ability:
Indeed, to goodly governance – the blessed public square! –
The only threat is (somehow) if Civility’s not there!

The foolish may endorse such things, but I will heap disagrace
On those that recklessly call evil, evil, to its face:
In social dealing with the ones who’d rend the state to tatters,
The main thing is we mustn’t let them think it really matters.
Constituents may wonder, and then ask me, do I dare?
Do I dare, eg, impeach? Civility’s not there!

It may be satisfying but consider where it ends,
This being impolite to those who’d like to kill your friends:
Oh, the bread that I have broken! Oh, the cheeks that I have kissed!
Among those who want to kill mine (at least, make them not exist).
You may approve of kindness: well, let me just be clear:
It’s partisan to say so – Civility’s not there!
Remember: history says (if I am the one to explain)
The way to beat oppression’s to on no account complain.

Civility, Civility, we must maintain Civility:
The thing to do with fascists is, sit down and take a sip of tea.
You may think it’s important that the world knows someone cares:
Well, I won’t stand for that, Sir, if CIVILITY’S NOT THERE!
Let shocked and fearful people think they are alone – for honour’s sake! –
And do not show them all that there are actions they can take:
Though men in uniform abduct your parents in the night,
Remember: where we come from port is passed from left to right.
Should they slaughter all the senators – should blood run in the forum –
We’ll defeat them, with the only power we recognise: decorum.