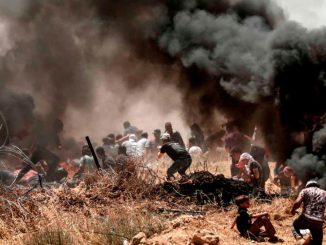 The demonstrations had come in the wider context of laws designed to restrict the movement and employment of those penned up in the equivalent of an open air prison. Sources disagree as to the behaviour of the crowd. Some state that the crowd was peaceful, while others state that the crowd had been hurling stones, and that the shooting started when the crowd started advancing toward the fence. 69 protesters were killed, and 289 casualties in all. A storm of international protest followed.

No, I’m not talking about this week’s slaughter in Gaza. The above is taken from the Wikipedia description of the Sharpeville massacre of March 21, 1960 – when heavily armed South African forces used tear gas before opening fire on a large crowd who had been protesting the pass laws that cooped up black families in appalling conditions, apparently forever, and without hope of deliverance. Today’s leaders in South Africa can see the parallels between the bantustans of its apartheid past, and the conditions currently being endured by Palestinians in Gaza. South Africa has therefore recalled its ambassador to Israel:

The South African foreign ministry explained that its decision had been taken to protest the indiscriminate killing of protesters. “Because of the grave and indiscriminate nature of the latest Israeli attack, the South African government has decided to recall Ambassador Sisa Ngombane with immediate effect,” read part of the statement.

The Gaza protests had coincided with the opening of the US Embassy in Jerusalem. Palestinians have long seen East Jerusalem as being their potential capital within the vaunted “two state solution” of a Palestinian state comprised of what is currently the occupied West Bank and Gaza Strip. In deference to this goal, most countries have treated the status of Jerusalem (which is a city held sacred by Christians, Jews and Moslems alike) as something due to be ultimately determined only within the context of a final peace deal.

By shifting the US Embassy to Jerusalem, US President Donald Trump has (a) given his seal of legitimacy to Israel’s 1967 annexation of East Jerusalem (b) fatally skewed any future peace negotiations and (c) ended any role for the US as an honest broker in resolving the Middle East’s most enduring dispute. The only ‘peace’ now being offered to Palestinians is the peace of the grave. This is relevant, too:

In December 2017, Togo was the only African country to support the US motion to establish an American embassy in Jerusalem. The United States which was furious at the lack of support from its allies, threatened to cut aid to countries that don’t support its positions at the United Nations and in several other international fora.

This bullying and threats to cut off US foreign aid evidently had the effect desired by Washington, given the attendance at this week’s ceremony in Jerusalem:

Unsurprisingly, the White House (and Israel) laid the blame for this week’s massacre on Hamas, as if ordinary Palestinians do not have ample cause to rise up under their own volition:

In Washington, a White House spokesman faulted Hamas for the violence. “The responsibility for these tragic deaths rest squarely with Hamas,” said the official, Raj Shah, at a regular press briefing. “Hamas is intentionally and cynically provoking this response. And as the secretary of state said, Israel has the right to defend itself.” He said he had no answer on whether the White House would be in touch with the Palestinians but said a peace plan would be brought forward “at the appropriate time.” Mr. Shah added that Monday’s events would not have an impact on it.

Yeah, right. They made us do it. This stance by the Trump White House seems to be entirely consistent with the formal resolution that was passed back in 1960 (in the wake of the Sharpeville massacre) by the Mississippi state legislature, which chose to congratulate the government of South Africa for its “staunch adherence to traditions, in the face of overwhelming external agitation”.

Footnote: One bizarre aspect of the Israeli/Palestinian conflict has to do with the understandable sensitivities around Israel’s right to exist as a nation state – even though this is commonly expressed by Israelis (and Americans) who routinely deny that Palestinians actually exist, as a people. This week, this denial of the existence of competing rights was echoed by Israeli PM Benjamin Netanyahu’s description of Jerusalem as the “eternal, undivided capital of Israel”.

If that statement was meant romantically, it might hold some water. But as a statement of historical fact it is highly questionable. As a recent article on the city’s history by Middle East expert Juan Cole points out, the early pagans and Romans and fanatical early Christian Roman emperors had all discriminated against Jews – who were granted legal access to the city and a degree of religious tolerance only during a period of rule by Iran’s Sasanian empire (AD 614-629) and later, by a succession of Muslim rulers:

Roman restoration of control over Palestine, circa 630-636 was brief… The Muslim commander of the faithful and vicar of the prophet, Omar bin al-Khattab, took Jerusalem in 636-37 and visited it that April. Muslim rule was to last save for the short hiatus of the Crusader kingdoms until World War I, when General Allenby took Jerusalem from the Ottoman Empire. Muslims viewed Jews as a legitimate religious community, unlike Inquisition-era Europeans such as the Spanish, and so Jews were free to live in Jerusalem, though few did since it was a small and insignificant city and many went to Muslim capitals such as Cairo, and later Istanbul, instead.

So it isn’t true that Jerusalem has throughout history been “Jewish”. For hundreds of years under the Romans, whether pagan or Christian, the city was made completely devoid of Jews, at least by law. Ironically, it was Iran and the Muslims who rescued the Jews from that exile from Jerusalem.

As mentioned, if Netanyahu was referring to Jerusalem in a romantic sense… ie, as an identity-defining capital and focal point of Jewish aspirations, he has a point. The trouble is, Palestinians feel exactly the same eternal identification with their homeland, Palestine – and with its capital in east Jerusalem. That’s why a just peace cannot emerge if one side continues to treat the process as being purely a zero sum game.

This has been a week for sad songs. Yet happily after what seems like decades of rancour and indifference, the two members of Outkast – Andre 3000 and Big Boi -recently got together amicably at the graduation ceremony of Big Boi’s son. Almost as miraculously, Andre 3000 released this fine tribute song to the memory of his parents. (His mother died in 2013, his father a year later.) The pianist on this track is Andre’s long time collaborator, Kevin Kendrick. Can one dare to hope for an Outkast reunion?