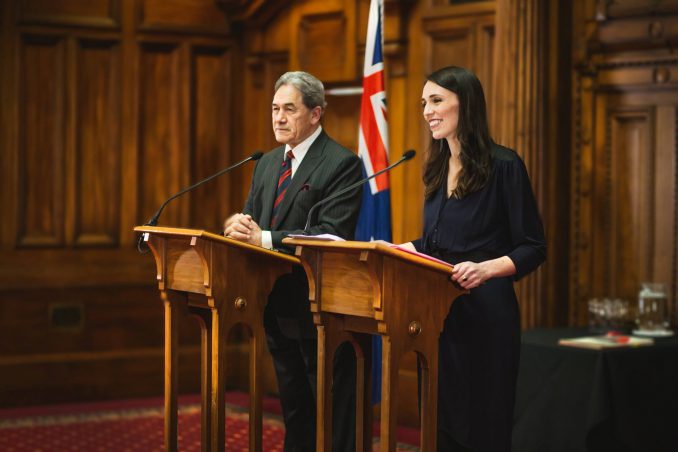 The media reports the facts…. but that’s not the end of it, and nor should it be. It also marshals those facts and creates a story from them, usually one with a moral that’s implied or explicit. After six months though, it is still unclear just what the dominant media narrative is of the coalition government. Is it Idealistic But Impractical? Is its Heart in the Right Place, but is it Taking On Too Much? Is the coalition proving to be Fractious And Unstable, or is it Surprisingly Adept at Keeping Its Inherent Rifts Out of the Public Eye?

Hmmm. And what of Prime Minister Jacinda Ardern, who doesn’t fit either of the stereotypes commonly applied to female politicians. Ardern is not an Iron Lady (eg Margaret Thatcher, Helen Clark) but nor is she a Sob Sister who is too emotionally volatile to manage government business as consistently as a good, reliable bloke (like Bill English?) would be assumed to do. (Gender cliches enable media narratives to virtually write themselves.)

Much as the mainstream media was eager to award Iron Lady status to Ardern if she sacked Clare Curran, Ardern resisted the temptation to score personal points at the expense of her own team. Curran is hardly a stellar performer but (a) the absence of solid proof that she was trying to circumvent the RNZ board and (b) her being less than candid in replying to parliamentary questions still didn’t add up to a sackable offence. Even so, the Curran episode has served its purpose as a useful first step in the fashioning of a media narrative around the (in)competence of the coalition.

How do media narratives get formed? Ideology is part of it. Ideology is manifested in certain assumptions that the mainstream media tends to share with its corporate owners. Therefore…taxation is always bad, rules and regulations are always onerous, the private sector is inherently more efficient and social spending is always to be regarded as regrettable, albeit inevitable. (Tax and spend liberals – who combine the two cardinal sins – are utter anathema.) Any government that dares to contradict any of those maxims can be guaranteed a hard time of it – even if the accusations do tend to be of the “ When did you stop beating your wife” variety about crises that barely register beyond the Beltway.

For example :“After a month of putting out political fires,” this recent report mystifyingly claimed, “Prime Minister Jacinda Ardern has surely been counting the days till her escape to the other side of the world.” Surely not, in fact. Where is the evidence that Ardern went scuttling aboard the plane to CHOGM? In the previous month in question, she had led a telling attack on the previous government’s underfunding on health, and creamed National leader Simon Bridges in a fierce head-to-head encounter in Parliament.

Ardern had also co-presented an integrated transport reform plan that shifted the bulk of spending from superhighways into improving safety and maintenance on local roading and state highways. In the process, the plan would modernise our transport network by investments in rapid transit, public transport, rail and cycling. You might well think that shifting the spending emphasis away from Auckland’s congestion problems might prove to be popular in rural and provincial New Zealand. Fat chance of that – given a media narrative (headlined “Labour’s New Strategy – Bury Bad News in More Bad News”) intent on portraying a government so steeped in its own flustered incompetence as to be incapable of the simplest strategic decisions.

Reality though, as Stephen Colbert ironically pointed out, has a well-known liberal bias. Even before the last election, two thirds of New Zealanders polled felt there were more important priorities for government than tax cuts.

By and large, the public also currently seems to prefer the government that Attempts Too Much, than the one that gutted public services in order to achieve a balanced budget. As Ardern has argued, the rotting walls at Middlemore Hospital are symbolic of the neglect and underfunding that lay beneath the narrative of economic competence that National (and its media friends) had cultivated so assiduously. Same story at EQC. Short-term thinking (and penny pinching) driven by central government led directly to a plethora of inadequate earthquake repairs, that now have to be re-done at calamitous cost.

The next major media narrative opportunity will come later this year, when the pay rounds for nurses and teachers are finally settled. No doubt, the tired narratives of a government Captured By Its Union Mates will be trotted out once again. Fortunately, there is a strong counter-narrative ready and waiting. Does National (via its media friends) really want to put itself in the position of arguing that nurses and teachers do not deserve higher pay, and a sizeable reward for their efforts in keeping the health system afloat during the nine years in which public health was systematically starved of adequate funding ?

Similarly, do the nation’s teachers not deserve due compensation for their efforts while National was busily starving operational grants and special needs services in order to artificially balance the books – even if that neglect meant running up massive social deficits?

According to recent NZEI research, over eight out of ten New Zealanders think teachers deserve a pay rise (both as due reward, and as a way of addressing teacher shortages) and over two thirds of them support a 10% pay rise. Can this be why – contrary to the old narratives – National leader Simon Bridges has recently been tacking leftwards on the tax cuts vs social spending option, to the evident alarm of some wingnuts on the right.

Finally, media narratives have consequences, even when they’re entirely bogus. A government that’s always putting out fires (however maliciously those fires have been lit) will always be less compelling than one that’s regularly on the front foot. During the Clark era, bogus nanny state narratives dovetailed neatly with gender stereotypes about Helen Clark. Currently, as Brian Fallow pointed out the other day in an excellent NZ Herald column, two recent surveys have shown that consumer confidence is in robust shape, to an extent rarely bettered over the past ten years. As ANZ chief economist Sharon Zollner put it:

The strong labour market is supporting household incomes and various government policies are intended to provide a further boost, while at the same time strong commodity prices are boosting exporter incomes,” she said.

Yet business confidence is down in the dumps, and pessimistic. Or rather, it is pessimistic generally while – amusingly – the same firms are notably more upbeat about their own prospects. As Fallow notes :

We have seen this pattern of gloom about the general situation but confidence about firms’ own activity before, in the mid-2000s. It may not be a coincidence that Labour was also in power then. It was also a period of brisk economic growth. That might suggest there is an element of tribal political sulking to the current gloom.

It surely does suggest as much. ‘Tribal political sulking’ is a fantastic phrase. It is an apt reflection of the hold that a bogus narrative – National as the Only Sound Economic Managers – still has upon one of the most intellectually hidebound, and change-averse sectors of the community.

Footnote : Here, for the record, is an (incomplete) summary of the achievements of the coalition government to date.

1. Legislation to give effect to the Families Package
2. Extension of Paid Parental Leave
3. Healthy Homes Guarantee Bill setting minimum standards for rentals –
4. Ban on overseas speculators buying existing houses
5. Fees free for post-secondary school education or training for first year from 2018
6. Directive to Housing New Zealand stopping the sell-off of state houses
7. Increase to Student allowances and living cost loans of $50 from 1 January 2018
8. Beginning of work to establish the Affordable Housing Authority and KiwiBuild programme
9. Tax Working Group – Terms of Reference announced and Chairman appointed
10. The restart of contributions to the Super Fund
11. Pike River Recovery Agency established
12. Legislation to provide greater fairness in workplace – Employment Relations Act amendment announced
13. Minimum wage to rise to $16.50 to take effect from April 2018
14. Introduced legislation to set a child poverty reduction target and to change the Public Finance Act so the Budget reports progress on reducing child poverty
15. Legislation to make medicinal cannabis available for people with terminal illnesses or in chronic pain
16. Set up an inquiry into the abuse of children in state care
17. Set up a Ministerial Inquiry in order to fix our mental health crisis
18. Set zero carbon emissions goal and begin setting up independent Climate Commission
19. Released an integrated transport reform plan – with greater emphasis on regional roading, road safety, public transport, rapid transit and cycling
20. Set up a commission of inquiry into the Hit&Run allegations about the actions of NZDF in Afghanistan
21. Putting an end to oil and gas exploration as part of NZ’s response to climate change, and signalling a further shift to renewables

This is hardly the track record of a flustered coalition government that’s falling over its own feet in disarray.

For the past five years, Kacey Musgraves has been one of the sharpest writers in contemporary country music, as evidenced by her breakthrough hits “ Merry Go Round” and “Follow Your Arrow” – with the latter defying Nashville convention by offhandedly giving a greenlight to same sex relationships, whatever. Her new album Golden Hour includes a sober argument for basing relationships on something other than sky-high expectations, given that they’re almost bound to go unfulfilled and aren’t necessary in the first place :

Ever since she left the experimental Fiery Furnaces group she and her brother led in the 2000s, Eleanor Friedberger has been making interesting pop tracks situated far closer to the mainstream. Her new single “Make Me A Song” offers a good balance to “Wonder Woman” – in that it’s a call to take risks in the name of living more authentically. Which is also not a bad political argument, either.