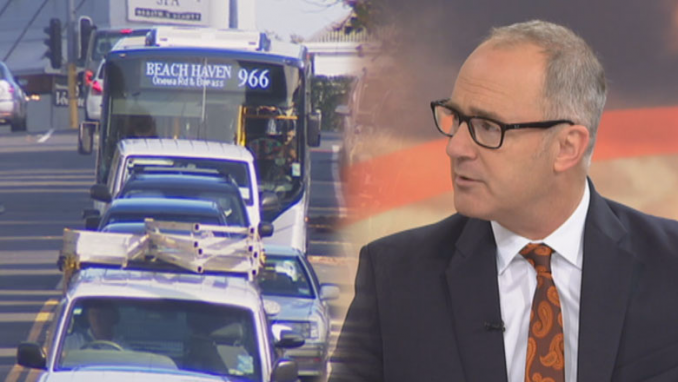 More than once, the coalition government has ruled out using public private partnerships (PPPs) to fund the country’s infrastructure needs in health and education – apparently private profiteering in those areas is recognised as being undesirable. Not the same story though with transport, and the reasons for that differential treatment are mystifying. Earlier today, Transport Minister Phil Twyford announced that one of two new roads that the government would be co-financing would be a PPP – namely, the Penlink project that will link the northern motorway to the Whangaparaoa Peninsula.

The government will be putting $200 million into that project, with additional costs being met via private investors, after a tendering process. Tolls will be a key part of the equation. By contrast, central and local government will pay the entire cost – estimated at $500 million – of the Mill Road project, which will tackle congestion in the south Auckland area, towards Drury.

IMO, there is reason to be alarmed about the use of PPPs to fund any kind of social goods. In Britain and Australia, PPPs have had a chequered history often marked by cost blowouts, the socialisation of risk, and other long term negative consequences for the taxpayer. Much of the objection to them has to do with how the taxpayer gets locked into contracts where the private sector is (a) guaranteed profits over a fixed, long term period and is (b) all but insulated from risks, much of which the taxpayer gets to bear if/when they eventuate and finally (c) the projects end up costing more overall, given that governments can always borrow the necessary funds at a lower rate of interest than the private sector. All up, the taxpayer is routinely put on the hook for 30-35 years to pay more money to the private investors than would have been the case if the government had borrowed the entire sum upfront.

That last point though – how and whether the borrowing appears on the books – explains why governments tend to be keen on PPPs, and why this government in particular is resorting to them. Those Budget Responsibility Rules that Labour and the Greens signed up to last year (to prove their economic management credentials) have all but hamstrung the Ardern government’s ability to borrow more money to meet the social needs that have been steadily piling up during the past nine years of absentee government.

We have very low levels (by world standards) of government debt. Therefore, why does central government not borrow while it still can, at a 2.7% rate of interest, and thereby prevent the passing on of extra costs in future? The Ardern government readily sees the logic – and the generational fairness – in taking action now, on climate change. Avoiding the legacy costs of PPPs should be a similar no-brainer.

Reportedly, Associate Transport Minister Shane Jones has just been in Australia on a fact-finding mission about PPPs, to find out how private investors can best work together with governments. Certainly, when it comes to PPP failures, Australia has had some doozies to offer : both the Cross City Tunnel in Sydney, and the Southern Cross station development in Melbourne come to mind. PPP critics, like the Queensland University economist John Quiggin, doubt whether there have been any ‘standout successes’ where PPPs have delivered for investors, government and the users of the infrastructure in question.

To repeat : the immediate role that PPPs fulfil is a political one. PPPs get the immediate costs off the books, and foster the illusion that the government’s books are – in the short term at least – in balance. Originally, PPPs were touted as enabling the risk of subsequent cost blowouts to be transferred to the private sector ; yet, as Quiggin says, to the extent the model has evolved, the trend has been to shift the downstream risks back onto the taxpayer :

“Although there is talk about efficiency,’ [Quiggin says]” the big motive for governments, in my view, has always been the chance to get debt off the books, in accounting terms, though often not in reality,” he says. Noting that governments are getting tougher when negotiating contracts with private-sector investors, Quiggin says the typical PPP model is “irreparably broken”. He expects a shift in the structuring of projects.

“Now that both sides have wised up, the old PPP model is broken and we are seeing fewer ‘classic’ PPPs [which rely heavily on private capital and where investors price risk over the 20- to 30-year life of the project]. Instead, we are getting deals where the public takes much more of the risk.”

So..where might the potential risks be lurking in, say, that Penlink project that Twyford was talking about ? As he says, tolls are to be crucial ingredient of the funding mix:

He said it would be a toll road as the upgrade would likely be not worth the cost otherwise.

“Because of the design of the road it’s easily tolled, that generates a revenue stream that, it gets the project over the line. Without that it probably wouldn’t get over the line.”

Right. So the tolls really are a ‘make or break’ factor – which means the Penlink contract is going to need to include forecasts of the likely uptake by motorists, at the given levels at which the toll may be pitched. What happens though, if there is lower demand than estimated – and if the private investor can’t achieve the expected profit expectations that the tolls are supposed to deliver ? Contractually, will that risk then revert to the Crown – or can Twyford guarantee that the taxpayer will not be picking up the tab in any way for the economic risk of the project’s financial under-performance?

Reason I ask is that the PPPs that Shane Jones will have been tracking in Australia seem to be evolving in ways that insulate investors from more and more of such risks. To avoid contract compliance problems that may occur downstream, the Australians have also found it preferable to have a single private sector partner, and not several of them tendering jointly. But the most disturbing trend is that steps are being taken to ensure the investors are not left out of pocket if the project proves to be a flop with the public. Evidently, those private sector buccaneers are seeking contractual protection if and when demand falls below expectations :

“It makes little sense to expose a road concessionaire to demand risk.” [says Queensland University economics professor Flavio Menendez] “First, the private parties bearing demand risk do so in exchange for a risk premium … to the extent that [the private sector] cannot influence demand, the government may be the best party to hold the risk,” he says.

In this case, availability payments could be used and contracts renegotiated, e.g. extending a contract’s length until a private company recovers their costs, rather than leaving the company reliant on user pays tolls…

Yeah, right. So…in sum, not only do private investors get promised a fixed level of profit for circa 30-35 years, but they also get to offload the costs onto the taxpayer if the project goes sour, and the projected tolls income doesn’t eventuate. What Twyford has to do is explain how these and other risk management factors are going be managed, such as to ensure that the socialisation of risk doesn’t occur on this or any other transport PPP (light rail, rapid transit) that he has in mind.

Also, he needs to produce detailed comparisons that are spread over the entire duration of the project, to show the difference in cost (after interest) of using PPPs – as compared to the government choosing to borrow the money and build it itself. (Or not build it at all, if the supposed cost/benefit ratios don’t stack up.)

Basically….if they build it, will the motorists come, and will they pay the toll ? And if they don’t, what happens then?

In my previous column about the current sympatico between New Zealand and France and Ardern and Macron, I lazily used Francoise Hardy as an example of French music culture. Sure, she’s timelessly great – but a more apt, more modern example would have been either the young hip-hop artist Eddy de Pretto, or the 34 year old French writer/musician Gael Faye.

Faye is the son of a French father and Rwandan mother. He was raised in Burundi and has recently re-located to Rwanda. On this live version of his track “Paris Meteque” – as in much of his other work – he is the outsider looking in at the allure of Paris, and at its elusive distance from and outright rejection of people like him. “Meteque” translates roughly as “ wog” – and Faye’s torrent of poetry embodies what seems like a very French use of hip hop, one much closer than US or Russian hip hop to the country’s literary traditions. I love the evocative line ‘ma gueule est un musee’ (“my mouth is a museum”) which glancingly acknowledges how the outsider betrays their status (and their colonial past) every time they speak…Kind of sweet too, to see Faye still using turntable scratching as some kind of signifier of modernity:

On “Petit Pays” – also the title of a book written by Faye about his childhood, years of exile and struggle for identity – the relationship with Africa is tackled in a more conventional way. Beautiful video, too…