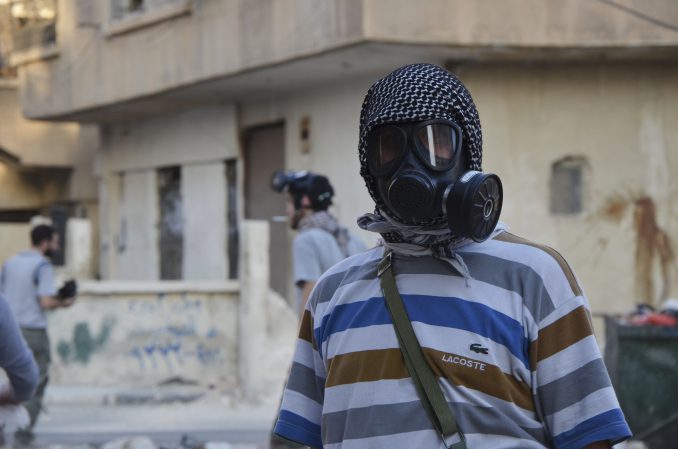 The past week’s headlines about the chemical attacks in Syria – and the military response by the US, France and Britain – have tended to overshadow a few of the downstream outcomes. For starters, the chemical weapons assault on Douma seems to have succeeded beyond the wildest dreams of the Assad regime. The military resistance in Douma led by the Saudi-backed Army of Islam – which was reportedly inflicting significant casualties on Assad’s elite Panther Brigade – has collapsed virtually overnight. Previously, the rebel militia located in two other districts of East Ghouta had already agreed to shift north to Idlib. The Army of Islam in Douma however (which is locked in a bitter feud with an Idlib hierarchy linked to al Qaeda) had refused the invitation to move north. As Juan Cole reports :

So [Assad] decided to send down a barrel bomb of mixed chlorine and sarin gas on Douma. Perhaps he just meant to kill a dozen or two dozen Army of Islam fighters. Instead, the gas killed around 70 people, including mostly civilians and some children, and the relief workers in the enclave got video and blew the whistle on the regime…. The Army of Islam leaders abruptly surrendered, perhaps under severe pressure from Douma’s terrified civilian population, who did not want to be further gassed so that the Saudi-backed Salafis could go on trying to save face.

Late Wednesday, a Russian spokesman at Latakia announced that as they departed Douma, the 8,000 Army of Islam fighters surrendered four hundred pieces of military equipment, light and heavy. Some 41,000 people have left Douma this spring through Russian checkpoints, 12,000 of them in April alone. They seem to be heading not to Idlib but to Jarabulus in the Aleppo governorate near the Turkish border and there are some reports of Turkey settling them in Afrin as part of its ethnic cleansing campaign against leftist Kurds there.

That’s one downstream outcome. The Western military response seems to have been tailored by the White House desire to minimize any potential confrontation with Russia :

The United States has no intention of using its firepower to halt the mass killing of civilians through conventional means, degrade Syria’s military forces, or to challenge Russia and Iran’s military positions is Syria.

The restricted target list — three facilities linked to Syria’s chemical weapons program — appeared to have reflected the more cautious influence of Defense Secretary Jim Mattis, who feared that President Donald Trump’s hint of wider war threatened to deepen Washington’s involvement in a war that President appears eager to quit. The strikes on the Syrian chemical weapons program may cause Damascus to think twice about using such agents in the future, but the limited operation reflects a deeply cold-hearted calculus in Washington: the Assad regime can slaughter its own population as long is it doesn’t use chemical weapons to do it.

Indeed, the Assad war machine has been keen to show it is still willing and able for further action, and this report also, from Associated Press seems significant in that respect:

For Assad, it was business as usual Saturday — or so his office sought to portray it, posting a short video of him walking into work, briefcase in hand…The recapture of Douma effectively ends a nearly seven-year rebellion near Damascus and marks Assad’s most significant victory since his forces retook the northern city of Aleppo in late 2016…

Ultimately, – and as widely predicted – last week’s US-led air strikes were largely token, just as the cruise missile attacks also were last year, in the wake of the chemical weapons attack on the town of Khan Sheikhoun. Besides, Assad had been well warned that an attack was coming :

The [Assad] government certainly had enough advance notice. Syria war monitors said the military emptied air bases and moved equipment before the strikes. …The Pentagon said Saturday that it believes the airstrikes “attacked the heart of the Syrian chemical weapons program,” significantly degrading Syria’s ability to use such weapons again. Russian officials said the damage was minimal, maintaining that all key air bases were intact and the purported chemical weapons facilities had been abandoned long ago.

In essence, the strikes have served to expose the lack of substance to US strategy in the region – especially now that Russia, Iran and Assad have all but won the civil war in Syria, and are now busily mopping up the remainders. As Juan Cole says, the US can probably manage to rally some regional support against Islamic State and other Sunni extremist groups, but support on the ground for the US position with regard to its pretty looming confrontation with Iran is almost non-existent. “Iraqi Shiites and Kurds are not willing to line up against Iran, or Iranian allies like Baathist Syria.”

One problem with countering chemical weapons is that their production and delivery is easy to decentralise – especially chlorine, which has valid and mundane alternative uses in say, the likes of swimming pools. Perhaps for that reason, chlorine was not banned under the 2013 agreement on Syria’s chemical weapons stocks hammered out between the then US Secretary of State John Kerry and the Russians. Significantly, there seems to have been little or no sign of gas dispersal is the wake of the Douma cruise missile strikes on the three central facilities. Storage has been dispersed, and – in any case – some of these weapons can be readily assembled, as needed.

The circumstantial evidence – the eye-witness reports, the reported symptoms etc – on the Douma attacks suggests that a combination of chorine and sarin was used. There are those who still dispute this evidence and who treat the whole Douma incident as being a “false flag” operation designed to discredit the Russians. In like vein, the Russians have even claimed the deaths in Douma were entirely faked. Comparisons have been drawn with the “weapons of mass destruction” claims made prior to the 2003 invasion of Iraq.

That analogy seems spurious, in one key respect. While the WMD claims were false, the use of chemical weapons in Syria has been well documented, by agencies like the Organisation for the Prohibition of Chemical Weapons (OPCW) by a UN fact-finding mission, and by a UN Human Rights Commission Inquiry. Ghouta itself (the area that includes Douma) had been a chemical weapons target before in 2013, via surface-to-surface missiles containing sarin.

In sum, the U.N. mission detected the likely use of sarin in the 2013 incidents in Khan al-Assal district near Aleppo, and in Ghouta, Jobar, and Ashrafiyat Sahnaya. For its part, the UNHRC inquiry subsequently confirmed the use of sarin in three of those incidents, noting that the sarin used in the Aleppo attack carried the same “unique hallmarks” as the chemical weapons used in Ghouta, which suggested to the investigators that, at the very least, those responsible had enjoyed access to the stockpile of the Syrian Army, and had possessed the means to store and transport it. As other observers have noted, chemical weapons attacks – while attributed in the main, to Assad’s armed forces – has also been allegedly carried out by the forces of Islamic State, by Turkey and by other combatants in the Syrian civil war.

In 2016 however, a joint UN/OPCW report explicitly blamed Assad for the 2014 chlorine bombing of Talmenes, and for the similar attacks on Sarmin and Qmenas villages in 2015. The BBC report on the UN/OPCW findings can be accessed here.

Similarly, the BBC report on the Khan Sheikhoun attack last year can be found here.

The delivery mechanism in Douma seems to have been an air-dropped barrel bomb (as it was in Talmenes and the Sarmin/Qmenas incidents) and, as mentioned, the symptoms among the casualties suggest that a mix of chlorine and sarin was involved. No doubt, everyone with a stake in the Syrian civil war and its regional implications – the US, France, Britain, Russia, Assad, Iran, Israel and Saudi Arabia – have had propaganda points to make about the Douma attack, and its aftermath. Even so, the victims deserve to be treated as something other than collateral damage.

The current evidence from Douma (and it includes eye witness testimony of the barrel bomb mode of delivery) strongly indicates that the Assad regime was responsible. As noted, the regime has had previous, documented form with respect to this kind of weapon, and with this mode of delivery. Given how well the Douma situation has worked out for the Assad regime, there seems every likelihood that further attacks of this sort will occur again, in future.

Talk about bad timing. Just as Defence Minister Ron Mark was announcing that a NZDF officer- Colonel Angela Fitzsimons – would be joining the UN mission in Mali, Al Jazeera was reporting a successful suicide attack upon the UN mission, carried out by rebels disguised as UN troops. Four UN peacekeepers in Mali were killed in February by a roadside IED. At least one peacekeeper was killed and dozens wounded in Monday’s attack.

The UN mission in Mali, which has more than 11,000 troops and was established in 2013, is one of the most dangerous peacekeeping operations in the world, with troops and convoys regularly coming under attack from armed groups. According to UN figures, more than 162 members of the mission have been killed since 2013.

A 2015 peace deal signed by the government and armed groups has failed to end violence in northern Mali by rebel groups, who have also staged assaults on high-profile targets in the capital, Bamako, Burkina Faso and Ivory Coast.

Given that this officer is being put in harm’s way, it would be re-assuring to think that New Zealand might have some idea what the Mali MISUSMA mission is likely to achieve, and what the end game strategy for its eventual departure is. Hopefully, we are not simply trying to curry favour with the Americans, after they lost four special forces troops in this same Mali/Niger conflict late last year.

Any mention of Mali is good reason to feature the Malian group (and recent WOMAD visitors) Tinariwen. This lovely video perfectly captures the inexorable lurching forward motion of camel transport…. Aptly enough, the lyric is a lament about the militarisation of the region.