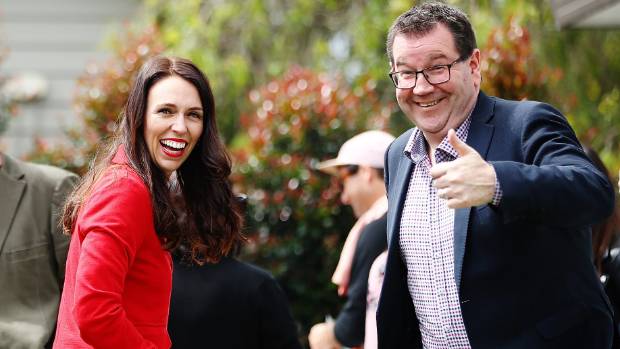 What an odd post-Cabinet press conference that was yesterday, from PM Jacinda Ardern and Finance Minister Grant Robertson. Overall, it was like hearing from the flight desk that the plane was losing pressure, one of the wings had been showing signs of wear and tear and we’d be making a rapid descent but on the whole, no reason to panic, folks. Besides, did we promise you this flight would be turbulence free? No, we didn’t say that. But we’re going to be OK. It will just take a bit longer to get to where we thought we were going. So in the meantime, please avail yourself (with moderation) of the inflight refreshments.

Not surprisingly, the gallery took this presentation to mean that the government was dampening down the expectations of what the Budget will deliver. If so, the rationale sounded plausible enough. Apparently, the rotting walls at Middlemore do not comprise even half of the mess that National has left behind, after nine years of neglect. So….since there are expensive needs lurking in every nook and cranny, why is Labour sticking so steadfastly to the right wing ideological dogma enshrined in the Budget Responsibility Rules (BRR) that – for no good social reason – require Crown debt to be reduced to 20 % of GDP in the next five years. (Currently, the figure is sitting at a low by world standards figure of only 23%.)

As Bernard Hickey pointed out to Ardern and Robertson yesterday, if the results of nine years of underfunding are crisis conditions everywhere the government looks – and at a scale akin to a natural disaster – why then, stick with the BRR? Why not borrow while you still can at 2.7%, invest in solutions and prevent the terrible outcomes that have been generated by National’s fixation on belt tightening and budget balancing,

As you can see from this transcript, Robertson had no real answer, beyond saying that Labour has already signalled its readiness to accept a slightly longer debt repayment path than National :

Yeah, look, I mean, we’ve been clear from the outset that we have a slower debt repayment track than the previous Government. We said that we would reach the 20 percent target 2 years later.

Wow. The same target as National, but two years later. Not exactly socialism red in tooth and claw, right? Nor is it a justifiable response to say, a public health system facing a $2.4 billion shortfall, just to stand still. Or shortfalls in education, defence and all the rest. This issue will remain a live one – because it goes to the heart of (a) just how radical the coalition government is prepared to be in dealing with the socio-economic problems it has inherited, and (b) the extent to which Robertson and Co remain beholden to the economic orthodoxy of the past few decades. As things stand, the coalition government is – quite rightly – decrying what the extent of underfunding (and the false economies promoted by National) have left in their wake. Yet this approach is still being allowed to define what passes for sound economic management – and Robertson, like the Third Way politician he is, seems unwilling to take the political risk of disrupting it.

As a result, Labour will be left trying to fix the problems it has inherited by administering only a slightly less toxic version of the same poison that caused them. By 2020, it may have done enough to be grudgingly re-elected, but its core supporters are currently on course to feel disappointed that more wasn’t done, given this challenge, and presented with this opportunity. The coalition government is well placed to take on more debt affordably, to address these legacy problems. It is choosing not to.

Footnote : Victoria University’s Geoff Bertram has recently offered a very good example of the new government’s apparent capture by the old status quo. Voters are going to be left largely at the mercy of predatory pricing by the electricity industry incumbents, while as taxpayers, we will also be forced into paying to soften the impact of those prices on the most vulnerable. Bertram puts all this in a wider context, with his conclusion. Any attempts to reduce say, child poverty are likely only to be token if they don’t address its structural causes :

We are in short a long way from 2013, when the Labour and the Green parties announced plans to force the electricity industry’s prices and asset values down. The next round of price hikes is on its way, underwritten by government policy and the law of the land (blame Parliament for that) and enforced by the debt collectors. A real commitment to reducing poverty in this country could usefully start by tackling directly the landlords, loan sharks and electricity companies that prey on the meagre household budgets of the poor.

Given the global outcry against the suspected chemical attacks in Syria

– with more outrage likely as the White House weighs its military options – it is worth asking why Syrian President Bashir Assad dared to risk this backlash. Especially when the Douma district (of the East Ghouta enclave near Damascus) in question was surrounded, and after nearly half of East Ghouta’s circa 400,000 residents had already fled, and when the few hundred rrebel fighters left in Douma were dug in in purely defensive mode. Apparently, the Russian-endorsed negotiations to evacuate Ghouta’s surviving rebels and civilians to Idlib in northern Syria had just broken down. (This seems to have been because the Saudi-backed fighters hanging on inside Ghouta are sworn enemies of the al Qaeda linked rebel faction that controls Idlib.)

In the meantime, Assad and his Russian backers appear to have concluded that any global backlash against the use of chemical weapons can be safely ridden out. Once again, the world will be selectively shocked – shocked!– by Assad’s apparent use of chemical weapons, but judging by past efforts, this outrage will quickly blow over, and without any meaningful follow- through.

That tends to be how it goes. Whatever military actions US President Donald Trump and the Pentagon dream up over the next 48 hours, they will have no effect on the strategic balance in Syria, or across the wider region. Last year, the US bombed the Shuaryat Air Force base in the wake of the regime’s chemical weapons attack on Khan Shikhoun. On that occasion, the US military strike failed to even disrupt the fighter jet traffic operating out of the air base. Furthermore, Trump has already announced his plans to withdraw US troops from Syria by October. A few symbolic gestures by Trump can be expected but the Syria people – not to mention the Kurds – will be left afterwards to the tender mercies of Assad, his Russian friends and Turkey.

Even given all of that – why did Assad launch this particular chemical attack? Juan Cole, once again, has the most cogent explanation. Rather than being a sign of impunity, the decision reflects the Assad regime’s essential weakness :

On Saturday, the Russian press, at least, reported that [the rebel] Army of Islam spokesmen boasted that the special operations Panther Forces (Quwwat al-Nimr) that had been committed against Ghouta militias were taking high numbers of casualties from Army of Islam snipers as they tried to advance into Douma. The regime has suffered a military collapse over the past 7 years, with most Sunni Arabs deserting or defecting. Alawi Shiite troops are for the most part loyal to the regime, but there may be only 35,000 or 50,000 of them left (the Syrian Arab Army had 300,000 troops in 2010).

The long and the short of it is that strongman Bashar al-Assad cannot afford to lose highly trained and highly valuable Panther Forces troops in large numbers.

Chemical weapons are used by desperate regimes that are either outnumbered by the enemy or are reluctant to take casualties in their militaries. Barrel-bombing Douma with chem seems to have appealed to the regime as a tactic for this reason. [Moreover] It had the potential of frightening the Douma population into deserting the Army of Islam. Guerrilla groups need favourable populations in which to operate.

That very same tactics – kill and terrorise the civilian population to force the survivors to turn against the rebels – are also being actively pursued by the Saudis in Yemen, while the world barely bats an eye at the carnage. In the meantime, the furore over Syria is providing cover for all kinds of opportunism. Israel for instance, has reportedly used the chemical weapons outrage as cover to attack Iranian/Hizbollah forces inside Syria.

The Kurds, who the US used to do the bulk of the fighting for them on the ground against Islamic State, have now been sold out by the Americans, as Turkey’s claims to have “neutralised” 4,000 Kurds last month in the northwestern Syrian town of Afrin.

Strategically, the overall Syrian situation remains unchanged. The US has let itself be sidelined, and is now headed for the exit, leaving its Saudi-backed proxies to defend its interests. A weakened Assad has survived, but is now dependent on Russia and in future, on Turkey’s good graces. Iran, which entered the Syrian civil war for largely defensive reasons – ie, to prevent the establishment of a hostile Saudi-backed fundamentalist regime on its border – now has unrest at home to deal with, much of it directed at the cost of its foreign policy adventures. Crucially, Iran is not interested in a military escalation with Israel in Syria, no matter how keen the US, the Saudis and Israel may be to provoke such an outcome.

The Music of Risk… Since Christmas, the French born, UK raised grime musician Octavian has become one of the stars of a musical form that – like reggae in the past – has been restricted by its conventions in reaching a mass audience. Octavian’s first hit “Party Here” was striking but this “Hands” track takes far bigger risks. It sounds as if the parts are arriving virtually at random, but they fit together seamlessly, as the song progresses :

And here for old times sake, is ‘Party Here’ which came out a few months ago…