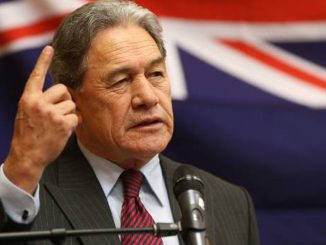 The weekend attempts made by Foreign Affairs Minister Winston Peterson on the Nation TV programme to downplay Russia’s role in the shooting down of MH 17 have already been earning some unflattering coverage across the Tasman. Understandably so, given that Australia lost 38 of its citizens when the Malaysian Airlines flight was shot down over eastern Ukraine in July 2014.

As the (paywalled) Australian newspaper has pointed out, investigators have established that the plane was shot down by a Russian BUK missile, was launched from territory controlled by Russian-backed separatists, and after the missile in question had been transported to eastern Ukraine from Russia. No doubt, US armaments fired by US proxies have been responsible for atrocities elsewhere. However, this does not exonerate Russia for a chain of complicity in the MH17 case.

Peters however, seemed to be expecting to see evidence that the order to shoot down the passenger plane came directly from the Kremlin, before forming any negative opinion on Russia’s role. Yesterday, reports surfaced that three Russian servicemen have been identified by Dutch investigators as being among the seven suspects identified as responsible for the actual firing of the missile.

In the same interview, Peters also defended US President Donald Trump’s tariffs on steel and aluminium as a response to what Peters sees as hypocrisy by the European Union on trade issues. The full exchange is illuminating:

Peters : Look, what’s Donald Trump’s biggest complaint? It’s that the countries that are shouting out free trade for America don’t take this free trade themselves. In fact, that’s New Zealand First and my complaint — that the countries that we deal with apply tariffs against us whilst we’ve given them total unfettered, free access to our country. It’s simply not fair. In that context, there’s something similar being said here, and it’s not Luddite; it’s not old-fashioned.

The Nation : So you have some sympathy…

Peters : It happens to be an economic fact, which some propagators of the free market tenets should actually face up and describe why it’s not fair for Donald Trump to do what he’s doing. Now, that said, we believe in free trade, but we believe in fair trade and even-handed trade for the advantage of the maximum majority of people on this Earth. And I can see that we have got a similar and very sound argument to put to Donald Trump, in fact, a very compelling one as to why he should exempt us.

Peters : The EU is not in the same boat when it comes to that.

The Nation : Okay. So you have some sympathy for his view, then, given your position, New Zealand First—

Peters : Well, I have a great deal of sympathy for what I call even-handed fairness. Why should the EU be screaming blue murder about that when what’s our barrier when we go to the EU? It’s always massive agricultural subsidies to protect theirs against open access from our country.

This is a weirdly selective view of events. Essentially, Peters is painting the EU as the villain of the piece – presumably in order to clumsily curry favour with Trump, in the (faint) hope this may win an exemption for New Zealand from the tariffs on steel and aluminium imports that the White House has chosen to impose. Only a couple of days later, the government was in damage control. As both PM Jacinda Ardern and Trade Minister David Parker were at pains to point out at Monday’s post Cabinet press conference, a bilateral trade deal with the EU is our top trade priority for the rest of this year.

Yet If Peters insists on siding with Trump in any trade war between the US and the EU that is triggered by the US actions, then that FTA could become very tough sledding indeed. Given the relatively small size of our steel/aluminium exports to the US – which Ardern pointed out at the press conference – the unlikely prospect of an exemption is hardly worth poisoning the pond of the EU trade talks, even before they start.

Footnote One. If Peters is going to rail publicly against the EU’s ‘massive agricultural subsidies’ he might care to look at the size of the US farm subsidies.

Footnote Two. Peters shouldn’t be trying to lend credence to Trump’s claims that the decline of the US steel industry – and the jobs lost in the Rust Belt – have been caused by the nasty trade practices of the wily Europeans. The steel tariffs are just Trump posturing to his base. As this excellent article in Bloomberg News explains, the problems of the US steel industry have been largely self-inflicted, thanks to the US steel industry’s decades-long record of failure to adapt to new production processes, rather than anything caused by unfair global trade rules :

…The blame lies with U.S. manufacturers who held onto the so-called “open hearth” method of steel production decades after its expiration date.

Because European factories had been destroyed during the war, they were quicker to adapt (when re-building) to the new ‘basic oxygen’ injection techniques that emerged in the 1950s, and were also quicker off the mark in embracing the later ‘electric arc’ technologies for steel production. By the time the behomeths of the US steel industry woke up to the threat, it was too late for the Rust Belt.

Interestingly, when smaller US steel firms such as Nucor did begin to beat the Europeans at the new steel production technologies, it was Nucor founder Ken Iverson who warned against the kind of protectionism that Trump is now seeking to provide. As the Bloomberg article says :

In an interview in 1986, Iverson noted that protectionist measures already instituted hadn’t had the desired effect. “As soon as prices began to rise so that the steel companies began to be profitable, they stopped modernizing,” he said. “It’s only under intense competitive pressure — both internally from the mini-mills, and externally from the Japanese and the Koreans — that the big steel companies have been forced to modernize.”

Footnote Three : Peters’ outburst over the steel/aluminium tariffs shows some of the difficulties David Parker may have in getting Peters onto the same page when it comes to negotiating the FTA with the European Union. Demonising the EU for its farm subsidies is not a terrific opening move, and is a battle we would be unlikely to win.

For the second time in less than a year – remember the interns debacle? – the Labour Party organisation has caused collateral damage to its parliamentary wing. This time, the youth summer camp activities held at Waihi included a party where adolescents – some as young as 16 – apparently had free access to amounts of alcohol…What could possibly go wrong?

When it did go wrong, the accusation is that the organisers (a) did too little, too late for the victims of sexual assault that ensued and also (b) failed to advise the PM of what had transpired at a gathering she had briefly attended, before the assaults occurred.

Obviously the assaults are more the important matter. The summer camp organisers claim to have been acting on the request of the victims themselves that parents and the Police should not be notified. Clearly, it is not a ‘cover-up’ for disclosure to be driven by the wishes of the victims. Even on matters such as seeking an abortion, it is not permissible to ignore a desire for discretion:

A woman or girl of any age can agree (consent) to have an abortion or refuse to have one….It is also your decision who you tell about the procedure – this includes your parent and parents. If you are a teenager, it is a good idea to talk to a parent or another trusted adult. If you do choose to seek an abortion, it is good to have adult support.

The question with the Labour summer camp is whether help was offered at the time and declined – which seems to have been the case – and also whether it was re-offered at the appropriate time. Here, the victims were let down. Reportedly, this follow up offer was made three weeks later – which, as the PM has conceded, was too late – and on the eve of the publication of a story about the incidents. The inference is that the organisers were acting purely from self-interest.

However, it could also be argued that the offer of help was re-made at that time, partly because of concern about the extra pressures that the media coverage would bring. There is something a bit off about the media raising this matter as if everyone else was acting out of self-interest, while its own motives – and the possible impact of media coverage on victims who had previously expressed their desire that the events not be publicly disclosed – are seen to be above question.

One upshot is that one can reasonably expect that any future gatherings of Labour Youth and the Young Nationals attended by minors, will be alcohol free. While alcohol was not the cause of these assaults – a 20 year old perpetrator was – it adds to the risk factors. Organisers of such events should now also be very aware of how (and when) to offer counselling help to the victims of sexual assault both at the time, and over subsequent weeks and months.

All Things Must Pass

Since his breakout performances on the Straight Outa Compton soundtrack, Anderson Paak has gone from strength to strength – both as a singer and charismatic live performer. This new track began life as an Apple advertisement directed by Spike Jonze. It features some spectacular dancing by FKA Twigs to Paak’s airy melody and vocals. Apple may have wanted a cosy hearth-warming experience, but the lyric is consistently more melancholy than the video conveys:

And don’t all this new music sound the same?
Yeah, we must be getting old and grey
We left early, girl, that band was shitty anyway
We went home, left our clothes up in the living space, aye
Would you stay if your heart had the power?
Would you run and find another life to imitate?
It’s important that we make the best of short time
You could never be my one and only, anyway
Say, can’t a young man dream?
Can’t we all live the life on a widescreen?
What’s the point? Yeah
Yeah, we had fun, if only for the time being