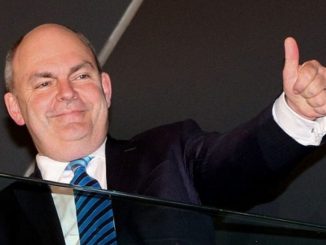 In the end, the party leadership left the loaded revolver on Steven Joyce’s desk, and he did the decent thing. Amy Adams as Finance spokesperson will now become the main “change” element in the generational shift promised by new party leader Simon Bridges. Already though, Bridges has pre-empted Adams by saying that National’s economic policy won’t be changing from the approach taken by Bill English. If that’s truly the case, only political nerds will be able to tell the difference between conservative inaction, and conservatism, in action. New crew, but the same old deck-chairs. Excitement successfully contained.

Back to Joyce. All along, those on the centre-right who claimed to love the John Key/Bill English era were peculiarly dismissive of Joyce, as if ashamed of themselves for embracing electoral victory on the ideologically diluted, entirely pragmatic terms on which Joyce delivered it for them. Arguably, no-one on the centre-right ever felt inspired by Steven Joyce. Instead, he was the tradesman who delivered National its electoral success and kept the machinery of government ticking over, but he was vaguely, irritably resented for his role in doing so. Did they really owe so much of it to this blowhard?

Well yes they did, actually. During National’s nine long years in office, the country was being run by a triumvirate – and while Key was admired and English was respected, Joyce was merely tolerated. Now that things have finally gone south for National, much of the blame for (a) National’s embrace of moderation and “pragmatism” (aka its lack of principle) and (b) the related fallout from its neglect of the country’s socio-economic problems has been laid at Joyce’s door. Good old Bill has been spared any of the blame. By contrast, there won’t be many tears shed at Joyce’s valedictory – and in all likelihood, he couldn’t care less.

Before entering politics, Joyce had been a self-made success in the media business, and he used that inside knowledge pretty cannily throughout his political career. At the height of Joyce’s influence (2010-2013) the myth of competence woven around him was very much a media-created phenomenon. For five years or more, news outlets willingly (and non-ironically) promoted the legend of first the “Jobs Czar” and then “Mr Fixit” and “The Minister of Everything.” Not entirely without reason. When Hekia Parata failed, it was Joyce who cleaned up the Novopay debacle, or at least got it off the front pages. At one point, Joyce’s reputation even reached as far afield as Britain.

Ironically – given the events of the past fortnight – it was the British Tory MP Michael Gove who once cited advice he’d received from Joyce to the effect that “Its always later than you think.” Meaning: before you know it, your political career is over. Political change therefore has to enacted quickly (or not at all) because chances are, you won’t realise your time is up until it is too late to be effective, any longer.

Unfortunately, that penchant for short term fixes – and his disbelief that a long game in politics even existed at all – were all too typical of the man. With that in mind and via the benefit of hindsight, when did Joyce’s own political career begin its decline? Some would point to his mishandling of the SkyCity convention deal – which was the point when it first became apparent that Joyce’s deal-making competence was in fact, inversely proportional to his sense of self-esteem. The SkyCity bungle cruelly exposed Joyce’s lack of business acumen.

Then came the State Services Commission report into Joyce’s ministerial fiefdom at MBIE. As RNZ put it at the time:

Out of 32 areas of review, the report highlighted 22 that needed development, and five that were weak… Only five areas were considered well placed for future performance, and none achieved the top rating of ‘strong’. MBIE rated ‘weak’ on leadership and governance; workforce development; improving efficiency and effectiveness, and financial and risk management.

Overall, it seemed that Joyce’s penchant for (a) micro-managing and (b) the prioritising of issues in terms of their headline potential had resulted in his office becoming notorious around Parliament for (c) its congested inefficiency as a ministerial black hole from which few meaningful policies ever emerged and (d) for a not-unrelated extent of staff burnout. By the time that Joyce landed National last year with his specious claims of finding an $11.7 billion ‘hole’ in Labour’s budgeting, his mystique was well and truly shot. (Not that this has dented National’s equally bogus claim to be a superior manager of the economy.)

The Minister of Everything Going Wrong

There was always a limit to Joyce’s utility. As Mr Fixit, Joyce was commonly engaged in the equivalent of blown fuses and leaking taps – eg. Novopay – rather in the re-design of the political architecture. Joyce was never (and never pretended to be) a Big Picture kind of politician. He was never someone with an abiding interest in systemic change. Never had the intellectual stamina for it. (Life in opposition would have bored him to tears.)

In 2015, Auckland University political scientist Raymond Miller agreed with that assessment in a Werewolf profile of Joyce.

“Yes, I think that’s right. I don’t think there’s a big thinker there at all. He deals with issues as they come up and he does it in a way he sees as being appropriate in terms of the reputation of his government and so on. But I don’t see him as being a big picture type at all. He’s not an idealist. He’s an opportunist. That’s just the way of his style of politics. We see the same, of course, with Key, but Key is a much more charming person. He [Key] does reach out to public opinion, and to community interests much more than Joyce.”

Yet if the differences are mainly stylistic – with Joyce being more than willing to play bad cop to Key’s good cop – then this shouldn’t obscure the fact that the underlying content is remarkably similar? Miller: “That’s right. And that’s why Key [was] so comfortable leaving things to Joyce to tidy up. Because Key [didn’t] feel he was any threat.” For that reason alone, Joyce was never leadership material. No charm, no vision. His recent run for the party leadership was primarily an attempt to protect his turf as Finance Minister; and even as such, it failed. Ultimately, Joyce became someone whose brand of pragmatism had outlived its usefulness.

Therefore, does Joyce’s exit mean that Simon Bridges has a more ideologically-driven agenda in mind for the National Party? We shall soon see if that is the case, but there is no sign of it yet. If Bridges merely wants to win elections with the same old moderate/pragmatic settings he has inherited, then Joyce may have walked the plank in vain. Bridges may not miss Steven Joyce, but he may well have to re-invent him, and find someone else able to play the role. Mark Mitchell perhaps, if he has the energy. Amy Adams is a work-horse – but unlike Joyce, she has higher ambitions.

Here’s a song by Julie London for Joyce as he heads out the door… think of it as “ Happy Birthday Mr President” in reverse:

Moving right along… this past week has seen new music from two terrific singer songwriters who emerged in 2016. Lucy Dacus released her second album Historian and Margaret Glaspy has just issued a three track EP in the wake of her great debut album, Emotions and Math. They’re both triumphs. Historian marks a significant step forward in arrangement, production, songwriting skills and vocal performance for Dacus, a 22 year old with the quiet confidence of a much older soul. Yet break-up songs should always be this fierce:

The first time I tasted somebody else’s spit, I had a coughing fit
I mistakenly called them by your name
I was let down it wasn’t the same I’m doing fine,
Trying to derail my one track mind
Regaining my self-worth in record time
But I can’t help but think of your other in the bed that was mine
Am I a masochist, resisting urges to punch you in the teeth, call you a bitch and leave?
Why did I come here? To sit and watch you stare at your feet?
What was the plan? Absolve your guilt and shake hands?

The song builds beautifully to transcendence – great guitar! – without losing any of its edge…

As with Dacus, Margaret Glaspy’s guitar is central to the proceedings – and those angular melodic lines were entirely in sync with the terse observations and sparse arrangements on the Emotions and Math songs. On the new Born Yesterday EP, she’s stretching out – almost to a fault on “Before We Were Together” (which spins its wheels a bit lyrically, towards the end) but overall…it’s a promising hint of the looser, fuller direction that she may be aiming to pursue on the new album.