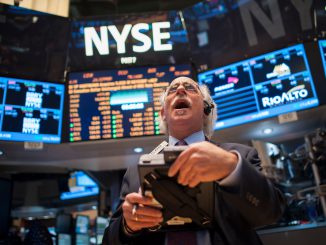 This morning, the Reserve Bank issued its first Monetary Policy Statement of 2018, and left interest rates unchanged while – non sequitur coming up – the world’s sharemarkets happened to be going through a rough patch this week. Yet to put this week’s US stockmarket “crash” in some kind of perspective… on the ‘Black Monday’ of 19 October 1987, the US sharemarket lost 22.6% of its value. Last Friday it lost only 4.6% of its value but – hold the headlines – Monday’s further fall could still be rejigged as amounting to the biggest loss of points in history.

In fact, some such ‘correction’ was all but inevitable. The Dow had raced up to 25,000 points, 8,000 points above where it had been only a year ago, and that rise came on top of a 140 per cent increase during the term of the Obama presidency. Given the skyhigh numbers involved, even a brief blip into reverse could still be hyped as a whole lotta points lost. If life was really measured in stockmarket points, the only word for it would have been carnage! But luckily it isn’t, and it wasn’t.

That’s not merely because later in the week, the stockmarket rebounded with the biggest gain since 2016, as investors poured back into the sectors that had been battered earlier in the week. It is also because the US sharemarket – apart from some huge exceptions like the crash of 1929 and the Global Financial Crisis in 2008 – has next to nothing to do with the overall state of the US economy.

While pundits may well wonder whether this week’s events do signal the end of Trumphoria among investors, the state of the sharemarket, as Nate Silver points out, tends to be a weak predictor of the fates of presidents.

More to the point, the Dow has precious little to do with the NZ sharemarket, once you factor out the sheep mentality whereby some local investors get panicked by almost anything that happens anywhere else. To be precise, the US plunge – such as it briefly was – had been spooked by fears the past nine year period of low inflation and low interest rates might be coming to an end. This conclusion was arrived at thanks to some strong US employment figures last week, with the potential for skills & labour shortages, wage demands and inflation to follow in their wake. Given the speed of the initial selloffs, some pundits also wondered whether actually, the same robot algorithms that drive milli-second speed trading had flipped and flicked into “sell” mode this time, without much prompting by flesh and blood people. Do robots dream of electric bears? It seems that they do.

Others blamed the volatility on the prevalence of ETNs (exchange traded notes) – which are an unsecured bank issued debt security vehicle devised back in the unregulated Wild West of the 2000s, before the Global Financial Crisis supposedly brought that sort of thing to a grisly end. Crucially, all this had next to nothing to do with us. As this morning’s decision showed, our Reserve Bank is talking about ending the low interest rate policy here (rates are at 1.75 per cent) anytime soon. That‘s partly because our wages are not growing. Yes, we do have skills shortages, but a wave of wage-generated inflation is extremely unlikely.

There are some wider issues in all this, though. Stagnant wages are not a good thing, even if they hold down inflation. We don’t really want the unemployed (or the under-employed) to be used as unpaid inflation fighters. Nor are those low unemployment figures to be taken at face value, given that they are generated – in part at least – by a rather elastic official definition of what qualifies as being employed. Moreover, to repeat: the local sharemarket happens to reflect the investment decisions of a relatively small bunch of people. About 90 % of New Zealanders don’t invest in the sharemarket, and never will. To put it mildly, the sharemarket’s pulse rate is not a reliable index of (a) the state of the economy or of (b) our personal wellbeing.

Deep down, we all know this. In all likelihood, many RNZ listeners every morning probably resent the amount of airtime that gets devoted to the endless yo-yo-ing of share movements of interest to only a small bunch of relatively affluent New Zealanders. The Dow, the Nasdaq, the Footse, the Nikkei… it might as well be a weather report from Mars. Newsflash: we don’t care about the fluctuations in your investments – and if you do, ring your broker. Ultimately, the main emotion triggered by the sharemarket fall this week was schadenfreude. Were they jumping out windows and/or losing their shirts? Was there panic in Wall St, and blood on the trading floor? One could but hope.

Footnote: You want further evidence of the prevailing stasis? Yes, after being seasonally adjusted, the unemployment rate fell to close to historic lows (4.5 %) in the December 2017 quarter, according to a Statistics NZ release. Even so, the under-utilisation rate – which measures people who are nominally in work but who want more hours – was 12.1 per cent or, say it quickly, 340,000 people. Obviously, our economy is still undercooked, if anything. The lack of a pickup in wage growth, one bank economist told RNZ yesterday, is “in line with the RBNZ’s concerns about a new, low-inflation era”. Meaning: we appear to be experiencing the exact opposite of the factors that were supposedly driving the US sharemarket’s recent rollercoaster ride. Lets hope our media ignores it next time. Largely, its just noise, not signal.

The Panic Is On

Hezekiah Jenkins (1893–1941) recorded this track in 1931, at the height of the Great Depression that followed the 1929 crash. (BTW, the Black Monday crash of 1987 didn’t put much of a dent in the wider economy, beyond ending forever a brief fashion in New Zealand for amateurs to dabble in the sharemarket. Ever since, they’ve bought property.) Nearly 86 years after he recorded “The Panic Is On”, Jenkins’ lyrics still seem pretty relevant toda :

All the landlords done raised the rent
Folks that ain’t broke is badly bent
Where they get dough from, goodness knows
But if they don’t produce it, in the street they goes
Doggone, I mean the panic is on

Some play the numbers, some read your mind
They’ve all got a racket of some kind….
Some women are selling apples, some selling pies
Some selling gin and rye
Some selling socks to support they man
In fact, some are selling anything they can
Doggone, I mean the panic is on

Not much is known about Jenkins, except that he also recorded a few other tunes, with his wife Dorothy. Here’s a great, upbeat ragtime number called “Shout You Cats” a song later recorded by Maria Muldaur…