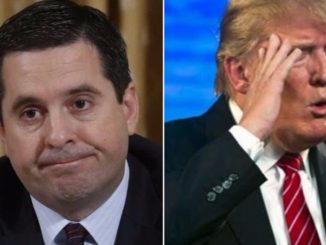 Every now and then the US system erupts and throws up a piece of political magma that can’t be described or explained in any rational fashion. The Whitewater scandal. Benghazi. The ‘Was Obama born in Kenya?” birther controversy. The Clinton emails. None of these stories made any sense. Subsequently it seems six of the Trump White House staff routinely use private email servers to carry out official business.

Regardless, these kind of stories generate a massive amount of media coverage before… they just sort of peter away, into thin air.

Democrats tend to feature as the villains of these narratives. The current furore that Republicans are whipping up over the Devin Nunes memo – which alleges that Donald Trump has been the victim of unfair (and potentially illegal) FBI surveillance – is the latest of these inexplicable US scandals to hit the headlines, while the outside world looks on, puzzled. Why is it considered surprising (or newsworthy) that a partisan Republican politician should be making a string of cherry picked allegations to defend a sitting Republican President in trouble? Because that’s what the Nunes memo most looks like: ie, it’s an effort to discredit the Robert Mueller probe into Team Trump’s dealings with Russia, by painting the entire process as a vast liberal conspiracy, with Trump cast in the role of its innocent victim.

The Nunes memo can be read in full here.

In summary form, its main allegations are these:

* The FBI used an unverified, allegedly biased document known as the “Steele dossier”to get a warrant in October 2016 to surveil Carter Page, a former Trump campaign adviser. The dossier, prepared by former British spy Christopher Steele, alleges the existence of a conspiracy between Donald Trump and the Russian government. The Steele dossier was partially financed by the Clinton campaign and the Democratic National Committee (DNC) — which the memo argues is a major problem. [‘Partially financed’ is right. The dossier was initially funded by the conservative Washington Free Beacon, to provide Trump’s Republican allies with ammunition against him during the 2016 GOP primaries.]

* Senior FBI and Justice Department officials knew that the Steele dossier was indirectly funded by a lawyer for the Clinton campaign and the DNC, but didn’t disclose this in their application to the Foreign Intelligence Surveillance Act (FISA) court — a court that approves surveillance warrants pertaining to national security and foreign intelligence. They also didn’t disclose it when renewing their applications requesting additional time for surveillance.

* In September 2016, Steele spoke with Deputy Attorney General Bruce Ohr. Steele told Ohr that he “was desperate that Donald Trump not get elected and was passionate about him not being president.” Ohr’s wife worked for the research firm, Fusion GPS, that hired Steele on behalf of the DNC/Clinton lawyer.

* The head of the FBI’s Counterintelligence Division Bill Priestap apparently said corroboration of the Steele dossier was in its “infancy” at the time of the FISA application.

Is that it? Given the massive hype preceding the release of the Nunes memo, even key Republicans have been left scratching their heads. Four members of the Senate Intelligence Committee (which voted along party lines to release the Nunes memo) have since publicly distanced themselves from the White House claims that the Nunes memo has ‘totally vindicated’ Team Trump. Even the Republican guy who says he helped draft the Nunes memo says it has nothing to do with the integrity of the Mueller probe.

There’s more. At the time when Nunes wrote his memo, a Democratic counterpart on the intelligence committee (Adam Schiff) write a ten-page rebuttal of Nunes’ allegations. Pointedly, the Schiff memo was not released by the White House at the same time it de-classified the Nunes memo, despite requests that both memos be released at the same time. For its part, the FBI has claimed that it had independently corroborated the Steele dossier contents pertaining to Page, and had only partially relied upon the dossier, anyway in pursuing its interest in Page’s activities. And obviously, Carter Page is only one piece of the Russian probe.

Out in the world beyond the Washington hothouse, it is especially hard to believe the FBI and its former director James Comey have been politically biased against Trump all along – when it was Comey who, only a week before the 2016 election, had chosen to re-open the investigation into Hillary Clinton’s emails, an act widely seen at the time as partisan in Trump’s favour, and instrumental in getting him elected as President. And is it even slightly credible that Robert Mueller, a Republican and former FBI director from 2001 to 2013 – he served under both George W. Bush and Barack Obama – is now an active agent in a liberal conspiracy working to undermine a Republican President? (‘Deep state’ theorists though, will believe anything.)

Trump’s decision to turn against the FBI seems to be merely the latest manifestation of his readiness to trash any institution or agency – eg the courts, the media, the intelligence agencies, the Constitution – for his own advantage, and/or to portray himself as a hapless victim of The System, even as he uses it ( in every sphere) to his own financial advantage. Trump’s pursuit of victimhood is especially energetic when it comes to the Mueller probe into his links with Russia. The release of the Nunes memo now increases the possibility that Trump may fire Rod Rosenstein, the deputy Attorney-General who appointed Mueller, or even Mueller himself, while using the Nunes memo as his smokescreen.

Footnote : What is kind of amusing about the Nunes memo (and the outrage it has generated among US conservatives and the folks at Fox News) is that – since 9/11 – the US has authorized and carried out massive intrusions into the privacy of ordinary Americans, and made unjustified surveillance into a fact of American life. (Edward Snowden risked everything in order to make that very point.) Yet now that Team Trump has allegedly become the target of such overly broad surveillance, this is suddenly intolerable, and a major scandal. And who was on the intelligence committee that authorized the latest round of expansions of intelligence agency (and FBI) surveillance powers? Why, Devin Nunes of course.

And of course, David Bowie knew all about these memo problems long, long ago. Here’s how he put it in “Dodo” from the Diamond Dogs album back in 1974:

He thinks he’s well screened from the man at the top
It’s a shame that his children disagree
They coolly decide to sell him down the line
Daddy’s brainwashing time….

And there’s even this line: “Now the perk’s are due /
Another memo to screw…” Phew, Bowie, man. He could see it coming.