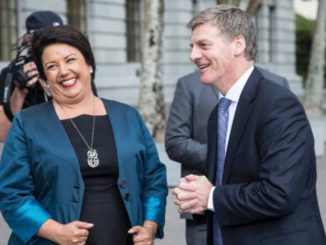 There’s a ritual to leadership changes after an election loss, and the National Party is dutifully following the script. In the immediate election aftermath, a brutal decapitation would have been too shocking to the party faithful. Thus in October, Bill English and Paula Bennett were re-elected by the National caucus, unopposed. Dissent and competition was postponed, but not for all that long.

Predictably, on the eve of Parliament reconvening this week, the doomed duo were given a nudge – with Bennett as the initial target, while English is being given time to do the decent thing, and leave with dignity. By mid-year though, both should be history – thereby giving the new team a two year run at the Ardern administration.

True, English did lead his party to a solid outcome (and National’s support has not declined in the polls since the election) so… if one totally ignored the fact that the political system changed nearly a quarter century ago, this was a praiseworthy effort. What National failed to do – and John Key and Bill English can share the blame for this – was to create the partnerships necessary under MMP, if a major party is going to be able to form a governing majority.

Instead, and with the short term thinking typical of its entire period in office, National chose to put its time and energy into failed projects that it could readily control – the Act Party, Peter Dunne and the Maori Party – while gambling that if it needed to, it could buy the support of New Zealand First with a few policy trinkets. English and Key didn’t do anything to open up workable lines of communication with Peters – quite the reverse – and National has paid the consequences.

It still faces that problem, regardless of who it chooses to put at the helm. Come 2020, National is still likely to have no viable coalition partner, and will need to reach 50% all on its own. To do so, either (or both) of two things would need to happen. The New Zealand First vote would need to collapse entirely – and there is recent polling that suggests it is already paying the price of being a junior partner in an MMP environment. Plus, the Ardern government would need to have been a total failure. At this point, the NZF collapse seems to be flowing into Labour – not National – and the Greens support is holding up. All up, that’s still a recipe for National spending a long time in opposition.

This should – but probably won’t – create caution among the ambitious within the National caucus. Why would it waste its best and brightest on a leadership change that’s highly likely to go down in defeat, thereby triggering another round of the debilitating leadership changes that plagued Labour at the start of this decade? Why should Simon Bridges risk everything, when acting too soon could only mean that he becomes the next David Cunliffe?

As this column suggested in October, National may be better off appointing one of its equally ambitious old timers – Judith Collins? Steven Joyce? – as interim leader, and sending them off on a kamikaze run in 2020, while either Bridges or Amy Adams play a deputy role, and bide their time for the real contest in 2023. Deputies can avoid copping lasting blame for election failure, as John Key did after serving time as deputy to Don Brash in 2005.

Whoever gets to lead National by mid-year, the strategic problem remains. In order to discredit the Ardern government, the tempting targets for Opposition attack are the New Zealand First ministers situated beyond Jacinda Ardern’s direct managerial control. Unfortunately, this is also the party that National probably has to woo, if it is ever going to govern again. A frontal attack on NZF as the weak link in this current governing arrangement could only humiliate/alienate the very people that National needs to win over to its side.

To repeat: it is pretty hard to wreck a relationship, and then hope to date one of the survivors straight afterwards. Still, if NZF’s fortunes stay below the survival line, you can bet that Shane Jones might become open to offers.

Not only is Adam Smith (1723-1790) the hallowed founding father of modern economics, he’s also commonly seen as the early champion of the superiority of markets to government planning. Well, this recent essay by Paul Sagar of Kings College, London all but turns that perception on its head.

Sagar argues that Smith’s hostility to government delivery derived from his belief that politicians were in the pocket of the merchants, and dutifully did their bidding. Therefore, his extolling of the liberating impact of markets wasn’t so much an argument against the role of the state, per se – but against the state’s tendency to collude with entrenched corporate power:

…If we dig below the surface [of the Wealth of Nations, Smith’s magnum opus] what emerges most strikingly are the differences between Smith’s subtle, sceptical view of the role of markets in a free society, and more recent caricatures of him as a free-market fundamentalist… For while Smith might be publicly lauded by those who put their faith in private capitalist enterprise, and who decry the state as the chief threat to liberty and prosperity, the real Adam Smith painted a rather different picture. According to Smith, the most pressing dangers came not from the state acting alone, but the state when captured by merchant elites.

As the essay spells out, the problem that markets could solve wasn’t government intervention, it was government capture. In modern terms, this puts him more on the side of the Commerce Commission than on the side of the market fundamentalists. Ultimately, regulation is necessary to save capitalism from itself, given its tendency to congeal into monopoly or near monopoly power – and its nice to know it was that tendency that Adam Smith really had in his gunsights.

Always interesting to hear a song on its journey to the version that finally lands in the public arena. In December, I came across Grace Vonderkuhn’s single “Worry” and liked it a lot – and then came across a version she did in July 2016 in what looks like her own backyard, with a bunch of happy pals and neighbours. Here’s the studio version:

And here’s the backyard version it came from:

Vonderkuhn hails from Delaware, and her debut album Reveries is due out in late February. And yeah, she gets a lot of Breeders (and Pixies) comparisons.

Footnote: while were talking about female singer/writer musicians, it seems amazing that come June, it will be 25 years since Liz Phair released her landmark Exile in Guyville.