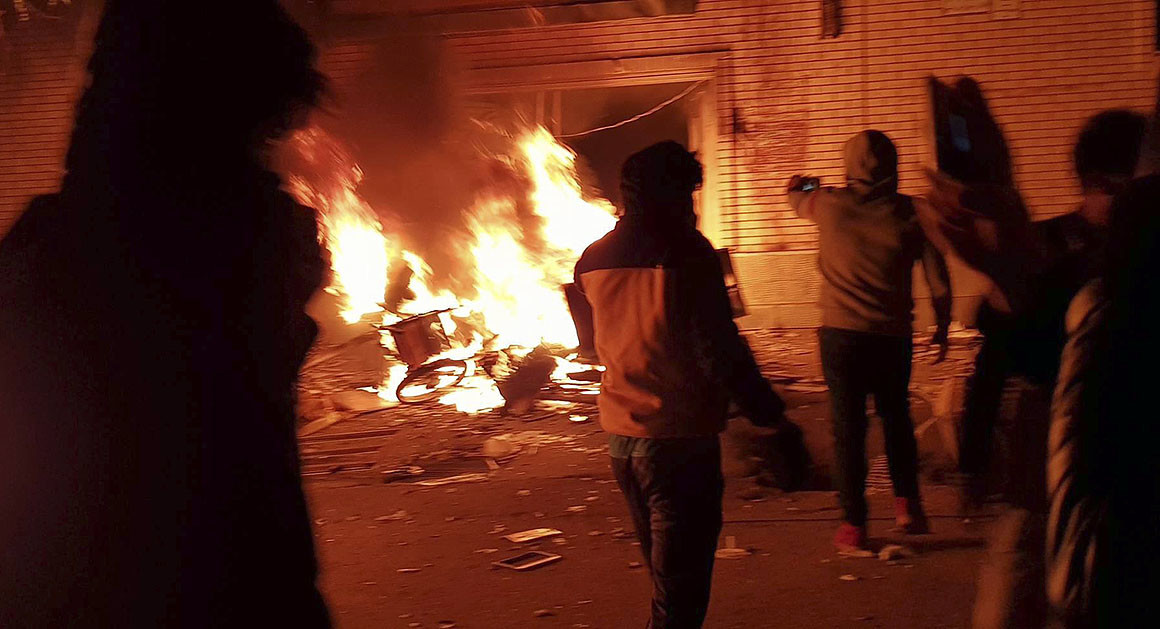 Satan may not exist, but the Evil One has always been a handy tool for priests and politicians alike. Currently, Iran is the latest bogey conjured up by Washington to (a) justify its foreign policy interventions and (b) distract attention from its foreign policy failures. Once upon a time, the Soviet Union was the nightmare threat for the entire Cold War era – and since then the US has cast the Taliban, al Qaeda, and Islamic State in the same demonic role. Iran is now the latest example, even though it is no more of an existential threat to the United States than any of the others. Even North Korea’s blustering has been almost entirely defensive, in order to deter a US-led invasion. (Significantly, not even the Trump administration has been able to detect any role by Pyongyang in funding terrorism, offshore.)

But back to Iran, and the ‘threat’ that it allegedly poses. For the record, Iran’s annual military spend in 2016 was $12.3 billion, which is only 3% of GDP. This was only slightly more than the $9.9 billion spent on armaments by Singapore, a country not normally seen to be a military threat. Iran’s military spend was dwarfed by the $63.7 billion spent on weaponry by Saudi Arabia (10% of GDP) and was considerably less than the $22.8 billion spent on arms by the UAE, at 5.7% of GDP. Turkey and Israel also routinely outspend Iran on armaments, as does Australia, which spent nearly double on its military (at $24.3 billion) in 2016, what Iran did.

Ah, but what about Iran’s alleged funding of regional terrorism in the Middle East? Well, as the US Middle East academic Juan Cole recently pointed out, Morocco, Algeria, Tunisia, Libya, Egypt, Sudan, Jordan, the West Bank, Saudi Arabia and the Gulf, and Turkey are entirely independent of Iran and Tehran has almost no influence in any of them where it is not actively despised. Iran is influential within the limited arc of Iraq, Syria and Lebanon. But as Cole adds: Lebanon is a small country of 4 million with no hydrocarbons and a gross domestic product of $50 bn. (similar to Bulgaria and Croatia). And it isn’t exactly hostile to the US, despite a cabinet that tilts toward Hizbullah and Iran (some of [Lebanon’s]politicians are Christians). Syria is a small war-racked country of 18 million and 11 million internal refugees, has no resources to speak of, has an army of perhaps 50,000 men and is just not important. Iraq is the only important asset of Iran by the economics and demography, but it is simultaneously an American ally with a 6,000-strong American troop presence and a US command.

In order to inflate the Iranian ‘terrorism’ threat, the US administration lumps in together (a) the Shi’ite militias in Iraq (b) the Iranian Revolutionary Guards and (c) Hezbollah as examples of the evil tentacles of Teheran. The trouble with this argument is all of those forces actually fought on the same side as the US recently in Syria and northern Iraq, first against al Qaeda and then against Islamic State. Moreover, the current regime in Iraq that the US (and NZ) military continue to support has strong ties to Iran – which has emerged from the sanctions era as once again being a potentially strong trading partner of New Zealand.

Meaning : we have utterly no economic or diplomatic reason to support the Trump administration’s obsession du jour with Iran, a crusade being driven purely by domestic political events in the US. In mid January, Trump has to renew (or jettison) the anti-nuclear deal that Barack Obama struck with Iran, whereby sanctions would be lifted if Iran agreed to end its possible militarization of its nuclear programme.

On all the available evidence, Iran has complied with its end of the bargain. Having lied that it hasn’t, Trump is now using the current internal protests occurring within Iran as his latest pretext for scrapping the Obama deal.

If Trump does so, New Zealand will need to stand with Europe in opposing such a move. Our trade interests with Iran would be torpedoed if sanctions were to be re-applied, the Iranian people would suffer – so much for Trump’s current crocodile tears on their behalf – and the nuclear tensions in the region would be re-ignited. We have every good reason to oppose any further US hostility to Iran.

The Shi’ite regime in Teheran is brutal and repressive, but it isn’t the main driver of regional terrorism. It also wasn’t the source of the terrorist attacks over the past few years in Europe and elsewhere. Islamic State is/was an extremist Sunni organization – as is the Taliban, as is al Qaeda. In other words, the perpetrators of the terrorist attacks in Paris, the UK and Germany, and on the citizenry of Pakistan have strong theological and economic links back to Saudi Arabia, which also provided the vast bulk of the 9/11 terrorists. Those attackers had no connection to the Shi’ite regime in Iran. Jihadism is an almost entirely Sunni/Salafi phenomenon, with what could loosely be called Shia jihadism being restricted almost entirely to the struggle inside Syria.

Even in the current civil war in Yemen, there is precious little evidence of Iranian material support for the Houthi rebels, and nothing remotely proportionate to the military might that the Saudis and the US have brought to bear on the hapless Yemeni civilian population, in clear violation of international law. In fact, the Yemeni conflict owes a great deal to Saudi Arabia’s chronic paranoia about the security of its northern provinces – fears that date back to the 1930s – and to Riyadh’s related desire to prevent the advent of a hostile Houthi-led government on its borders. As a consequence, Saudi Arabia’s current genocidal intent is to make life so utterly miserable for Yemeni civilians that they will turn against the Houthis, who have their own legitimate grievances against the corrupt heirs of the independence struggle of the 1960s. (Yemen is a lot like Algeria in that respect.)

For the past two years, Saudi Arabia has bombed Yemeni civilian centres and destroyed the country’s essential infrastructure – such as the water supply – thereby creating a cholera epidemic that is killing hundreds of thousands of people. To prevent the sick and the famine- stricken from receiving the food aid and medical care they need, the Saudis have also been blockading Yemeni ports for months, thereby stopping aid and medical supplies from getting through. In essence, Yemen is the new Rwanda, and the West is quietly ignoring it. So much more convenient to blame both sides. (RNZ routinely describes Yemen as a proxy war between the Saudis and Iran. It isn’t, especially not to the Yemenis. )

Why are protests occurring inside Iran ?

The current pattern of protests inside Iran is quite strikingly different from the Green Movement protests of 2009. Back then, the urban elites in Teheran took to the streets to protest the rigged national election. Their protest movement got brutally crushed, and many of the protesters and their leaders were killed or imprisoned. This time around, the protests in Teheran itself have been significantly smaller as public resistance seems widely seen to be futile. Instead, it has been in the rural areas and provincial towns that the biggest and most explosive protests have occurred.

No doubt, there is simmering resentment throughout the country at how real political power continues to be concentrated in the hands of the theocratic hardliners, with the current relatively liberal leader Hassan Rouhani serving only as a sop to the opposition. The immediate causes of the current unrest appears to be socio-economic. Price inflation and high levels of unemployment are rife, and these factors are hitting particularly hard in the regions. Moreover, with the replacement of Obama by Trump, any faint hopes that Rouhani might be able to win significant economic gains (and sizeable amounts of foreign investment) from the lifting of economic sanctions has now gone out the window.

In addition, there is also widespread resentment – stretching all the say back to the bloody war with Iraq in the 1980s – about the death toll among the nation’s young in foreign wars, such as the Syria conflict. One of the protest chants “ Not Gaza, Not Syria, My Life is for Iran” said as much, very succinctly. Although it should also be said that this chant has been a theme of Iranian street protests since 2012, at least.

For now, the Iranian hardliners are only being further empowered by hostile US actions. Voting for ‘liberal’leaders in Iran has once again been shown to be futile, since – Europe aside and {briefly) with Obama – the West will never meaningfully reward Iran for taking the path of compromise and conciliation. The US is simply too committed to the de facto alliance between Saudi Arabia, Israel and Egypt to genuinely try to encourage progressive change in Iran.

Footnote. No point expecting anything but lies and cynicism from Trump…but the US administration’s support at the UN for the democratic wishes of the Iranian protesters seems particularly hypocritical. Routinely, Trump praises and rewards dictators – such as Egypt’s Abdel al-Sisi – who have crushed movements for democratic change. The Trump White House has also recently sold out (to Turkey) the Syrian Kurds who fought alongside the US against Islamic State, in the hope of creating an autonomous region for themselves.

Footnote Two. Although he campaigned as the candidate who would end US wars of intervention, Trump has actually maintained or expanded every war he inherited.

As Matt Yglesias recently pointed out – in two years time, US recruits will be eligible to fight in Afghanistan who were not even born at the time of 9/11.

The Devil Is a Lie
Talking of Satan – either the one in the Christian tradition, or the Great Satan routinely invoked by the ayatollahs in Teheran the rapper Killer Mike had it dead right in this classic oldie. –Though I’m not sure if Mike was right when he suggested in this track that investment in real estate was the best option to the dope game, or the rap game.