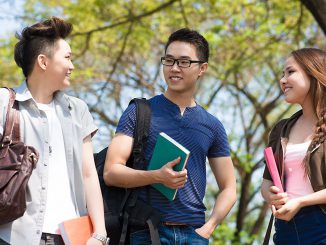 Shock horror. International students pay fees, spend money, work part-time and pay tax in the NZ economy, and ultimately some of them stay on and earn enough points to gain residency here!

Egad. They’re getting residency in the country to which they have already contributed, and which has given them a leg up? Sounds like the path many of our own ancestors trod. And yet apparently, we should all be terribly, terribly concerned about this evidence of diligence and mutual benefit? Because uh… Treasury says this process is driving down the skills level of our permanent migrant intake, supposedly when compared to the Good Old Days when we could pick and choose a better, already more qualified (and whiter?) source of student intake.

Here’s an idea: maybe the factors Treasury are linking are unrelated, or at the very least, somewhat less than causal. If New Zealand can’t now attract more qualified students from further up the qualifications ladder, it may be because other countries (Australia, the UK, the US, Canada) are offering them better incentives. Lets not try to blame the international student intake for this outcome – especially while we’re otherwise happy to take their money, and use their fees to prop up our education institutions, as they contribute to an industry that creates 33,000 jobs and adds $4.5 billion to our economy overall, and pumps $1 billion into New Zealand’s own education institutions. Oh, and while they’re also enhancing the cultural diversity of our communities, in the process.

In order to do so, yes…some of them do work part-time and thus fill labour shortages while doing so, especially in the regions. Treasury raises concerns about this, too :

The [Treasury] papers also warn there is a risk of students working full or part-time “displacing domestic labour and suppressing wages”, but there was not enough data to gauge the full extent.

Or, in other words, no evidence – beyond the anecdotal – that it is happening at all to an extent that comprises a net detriment to the country. What’s the alternative? Sure, we can re-direct our efforts, and spend our educational marketing time and money on trying to attract those harder-to-reach, better qualified and more highly valued student fruit – from the US and European markets – but there is no guarantee this effort will be successful to the levels desired, given the global competition that exists for them.

Meanwhile what are our education institutions – who have been deliberately made reliant on the influx of fee paying international students – going to do for funds during this transition, even assuming it can be done successfully? Given the priorities for spending by this new Government, do we really want to put at risk our current sources of revenue? To its credit, Treasury recognizes that the risks involved here are genuine :

The documents also outline risks to cracking down on student visas including less money for the international education sectors, and an uncertain future for some tertiary institutions, creating short term labour shortages and damaging international relations.

Hmmm. Those would seem greater risks than any question-marks still hanging over the quality of some international students, and over some local education providers. Yes, there have been concerns raised about Indian students in the past. Yet if Treasury is going to freely bandy the word “exploitation” around, surely these Indian students have been more the victims of exploitation than the perpetrators of it.

We took their money, turned around and blamed them, and then deported them. Currently, the intake of Indian students is in steep decline, according to November 2017 figures which point to the “rebalancing” (from volume to value) that has been going on within our India international education market:

Overall (on 2016 figures) there was a 3 % decline in student numbers from India. The only area of visa increase from the India market in 2017 was in the universities area, where there is an increase of 207 students – an increase partly driven, one assumes, as secondary students in previous intakes move into tertiary education. In sum …this “quality problem” with the India market – such as it is – seems to have been largely addressed already, and by the previous government. Its important to keep the ‘problem’ in perspective. In the year to November 2017, we had just over 81,000 foreign students in this country. We had 27, 640 international students studying at our universities in 2016 – an increase of 6%, with that increase in enrolment being evident at all levels of post-graduate study. On balance, the remaining ‘problematic’ part of the foreign student market seems to be a very small fraction of those numbers.

For that reason alone, Labour and New Zealand First alike would be wise to tread carefully, and not make significant changes ( especially when these are being driven largely by the populist pandering to anti-immigrant sentiment in Auckland) to a system that currently works very much in New Zealand’s favour. It isn’t often this column agrees with National’s immigration minister Simon Bridges, but as Bridges told RNZ: “Its a quality sector and I think the new government needs to be very careful before they started playing around with that and putting $3 or $4 billion at jeopardy”. Exactly.

Talking of kids and education, Woody Guthrie wrote dozens of excellent songs for children, and the US musician Elizabeth Mitchell did them full justice on her 2012 album for Smithsonian Folkways. Here’s a track, that puts the word “bling” to different uses…

And while we’re in this country/folk neck of the woods, here’s Helen Carter – daughter of Mother Maybelle Carter, and sister-in-law to Johnny Cash – with a great track of old time country music from the early 1950s.