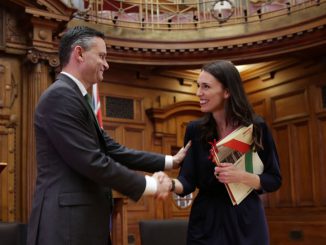 Some would querulously ask, zero net carbon emissions by 2050 – while others would say, why not? Yesterday, it did seem fitting that PM Jacinda Ardern and Greens leader James Shaw should end the political year by jointly announcing a climate change target that encapsulated the sky-high ambitions of the new government, and the rather less romantic bureaucratic mechanisms needed to make them happen. There are people who get excited by words like “interim committee” “consultation” “ transitioning” and “accountability.” James Shaw is one of those people.

If this was a movie… I hope this isn’t a spoiler, but yes, the finale does involve New Zealand becoming a net carbon emissions economy by the year 2050. As Shaw explained his Zero Carbon Fifty scenario yesterday, a crack special forces team of interim climate change committee members will come wading ashore early next year, to establish a beachhead for the independent Climate Change Commission that will begin the real business of transition, around April/May.

All the while, Climate Change Minister Shaw and his caucus colleagues will be consulting and discussing with communities up and down New Zealand about the implications of zero net carbon targeting for all of us, and for every aspect of socio-economic reality, with a view to having a Zero Carbon Act (backed by tip-top research) introduced into Parliament by October 2018.

That won’t be the end of it. As with any good franchise blockbuster, Shaw explained how the storyline has ample scope for crowd-pleasing sequels.

This is a big task and the transition will take decades. Climate change challenges us to make fundamental changes to our economy and we have a moral responsibility to do that in a way that brings people and communities along with us.”

The way Shaw put it, the legislation will require successive governments to be held accountable at five yearly intervals by the Commission for their progress on emissions budgeting:

“Putting our new climate change target into law will hold the Government to account and place New Zealand in a small group of countries who aspire to net-zero emissions in the next few decades,” Shaw said. “A Zero Carbon Act provides the certainty businesses need to make long-term investment decisions, and it will drive the growth and innovation we need.”

Everyone will into the tent. Due care will be taken that any disgruntled remnants of the recently vanquished Empire do not regroup into a First Order force able to secretly build its strength, and ultimately threaten the Galactic Concordance on climate change.

Casting for the Climate Change Commission has yet to be revealed, though Shaw did indicate that the members of the interim committee will be announced early in the New Year. Shaw himself will be played by Hollywood lookalike Jeremy Renner, while Emily Blunt receives top billing as the naïve-but-feisty Prime Minister, and Cliff Curtis plays the roguish Deputy PM and Foreign Minister. (The supporting cast includes Seth Rogen as Grant Robertson, and Daisy Ridley as twentysomething girl warrior Chloe Swarbrick. Vince Vaughn will strike the right note of seedily faded charm as Shane Jones, while James Franco plays nutty idealist David Seymour. The cast will be rounded out by Robert Pattinson as Clarke Gayford, and Meryl Streep has a scene stealing cameo as Annette King.)

Sure, back in the writers’ room, there will be challenges. A certain degree of realism will need to be achieved. Can it be made believable for an agricultural based export economy to achieve a net zero carbon emissions position inside of 35 years? And if we’re really intent on turning the page on fossil fuels in the pursuit of said zero net carbon emissions, how come this government is still issuing exploration permits for fossil fuel exploration around our coastline? Finally… there is potential for comedy in having an ‘independent” commission appointed and funded by the same government it will be monitoring, without losing its mojo.

Similarly, there will be scope for a few postmodern piss-takes as the Climate Change Minister and the Climate Change Commission sort out their boundaries, without tripping over each other’s feet in the process. More seriously… even after those lines have been drawn on paper, the suspicion will probably remain that the independence of the Commission is largely a political fiction. For example: when agriculture is finally required to observe at least some of the disciplines involved in emissions reduction, will it appease dairy farmers if the bad news gets delivered by an “independent” commission rather than by Shaw himself? Probably not. On current plans, if and when agriculture is included in the emissions trading scheme it will have a 95 per cent free allocation, with all the revenues being invested in agricultural innovation and further forestry plantings. Thereby, the softest of soft landings is being envisaged.

Yesterday was time for the Vision Thing. The hard parts are still to come. But if New Zealand wants to get serious about climate change – and that means having workable plans to reduce our emissions in agriculture, energy and transport – then these or similar steps are necessary. If anyone can take the country along this path in a reasoned and reasonable way, Shaw is the politician for the job.

In quick succession this year, James Shaw had to deal with the Turei fallout, a caucus rebellion, an election campaign where the party’s survival was seriously in doubt, and any number of (ongoing) Greens internal office staffing/administrative problems. He’s also had to come bounding out of the gate on climate change issues, without alienating New Zealand First, or a business sector that’s been schooled to regard the Greens-in-government as their worst nightmare. Only one song sums up that kind of pressure, and with the energy required to carry on…

Footnote: And finally, a few Christmas songs. “Mary” by Lou Barlow is a perennial at this time of year. It offers an interesting account of the Nativity from the heartbroken vantage point of the real father of Mary’s child. Apologies for the brainlessly literal video, but the song itself is far more imaginative.

“Blue Grey Christmas” by King Coleman starts off sounding like a standard 1960s blues lament, but has a surprisingly heartwarming and upbeat ending…

Finally, there’s the Hepsters with the best 1950s rock’n’roll Christmas song ever – and it has been set to a video shot in 2014 at Swansea’s Winter Wonderland, with one kid at least having a really great time…