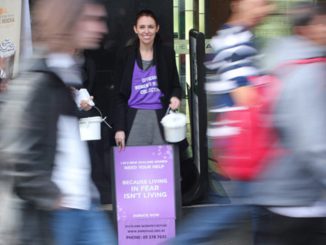 Fear has always been a useful mobilising tool in politics… yet in 2017, bogeymen of all shapes and sizes seem to have fallen on hard times. For years, the National party had painted itself as being the only reliable defensive bastion against the terrifying prospect of a centre-left government (the Greens! the Greens!)… Yet here we are nearly two months down the track, and James Shaw has not proven himself to be the Anti-Christ. In fact, the polls suggest that the public seems to quite like the new government, its Prime Minister, and its proposed plan of action. Somehow, even though a Labour/Greens/NZ First government is in power, the sun is still rising and setting, on time.

Elsewhere, other inflated threats have been successfully deflated in 2017, also without much in the way of noticeable fallout. For example: the forces of Islamic State (aka Daesh) have been routed from Mosul in Iraq and from their capital Raqqa, in Syria… But as Juan Cole has just pointed out, it seems highly significant that while this victory over IS/Daesh has been loudly celebrated in Russia, in Europe and in Iraq itself, it has hardly been noted at all by the White House.

As Cole suggests, maybe this is because the bogeyman of IS/Daesh has been a useful incarnation of Muslim terrorism, and one which the Trump administration still wishes to exaggerate in order to scare voters silly about the alleged threat from non-white immigrants, and thus validate their exclusion. No doubt, as IS/Daesh reverts to being only a guerrilla force, it may still be capable of doing some harm to America and Americans, but its 15,000 to 30,000 foot soldiers were never, ever the existential threat to the survival of the American state, as previously painted. As Cole says:

In this century, Muslim extremism has replaced Communism as the bogeyman. More people in America die from falling off a ladder than from terrorism tied to the Middle East, and the biggest purveyor of terrorism is the nativist hard right.

Those facts, of course, are beside the point:

The “war on terror,” like the “war on poverty” or the “war on drugs,” has become a plot device for politics, not a rational policy. The US public is not interested in the details. A Bogeyman is bad no matter the details.

The US public has almost no interest in Afghanistan, and very little in Iraq. The passing of Daesh/ISIL from the scene means nothing to them, because it is the eternal, ideal type of the Muslim extremist that now validates power. It doesn’t matter that Muslims mobilized to defeat the phony “caliphate.” Trump claimed credit for the victory all by himself. So Daesh is defeated. It doesn’t register. Bogeymen are forever. Trump is using this one to keep out brown skinned foreigners of all descriptions.

Closer to home, the ascent to power of Jacinda Ardern has meant that the centre-right now needs to find new means to scare the public back into line. That may prove to be more difficult than it has been in the past. Chances are, the Labour Party that ran nine successive budget surpluses in the 2000s will once again prove itself capable of running a modern economy, while also getting the things done that National blithely ignored, or – in the case of Steven Joyce – allocated funds that it then didn’t spend. The tax bogey (beware Taxcinda!) has already all but evaporated. Winston Peters, who has long been stereotyped by the centre right and centre left alike, may also prove himself once again to be a competent Foreign Minister abroad, and a far more capable manager of MFAT at home than Murray McCully ever was. The bogeymen are dropping like flies.

Good news. It means that the fear strategies that used to send voters scurrying back under the skirts of Nanny National, may have finally lost their power. Crazy prospect: the National Party brains trust may actually have to think of some new (and credible) centre-right policies. It hasn’t done that for a very long time.

Health: paralysis at the centre ?

Almost every sector of society has been neglected for so long under National’s watch, new funding needs are being discovered all over the place. This column has already cited the pressures on Chris Hipkins as the Leader of the House, Minister of State Services and Education Minister (all parts of that massive portfolio!) as being an unsustainable load for any mere mortal, and one likely to leave the government vulnerable to opposition attack. There are only so many balls that any one person can hope to keep in the air.

For instance: can Hipkins really be expected to be simultaneously devise the government’s strategies in the House, oversee all parts of an education system facing a teacher recruitment and retention crisis due to come to a head in the next wage round… manage all the funding/vocational issues to do with tertiary education, and oh, while staying across all aspects of state service delivery? Not likely.

In Health, there also looks to be a mismatch between the scale of the task ahead and the ministerial competence assigned to deal with it. One can only sympathise with Health Minister David Clark, while wondering if he’s the best fit for the job. To name only a few pressing concerns… Health has been systematically underfunded for nearly a decade. It has been receiving a declining share of the nation’s wealth (GDP) since 2010. Many hospital staff are burned out, unmet need is rife within an ageing population with rising health needs and requiring increasingly expensive drug treatments, mental health services require urgent rebuilding, and DHB finances are under chronic pressure. Reportedly, the Health Ministry itself is in crisis.

Moreover, the rank incompetence of Clark’s predecessor Jonathan Coleman – a man prone to running in terror from sector lobby groups and health professionals on core health issues, about which Coleman seemed to have little grasp and no discernible interest – has presented Clark with a mountain-sized legacy of problems. New Zealand is not alone in facing the fallout from starving public services to pay for tax cuts to those on higher incomes.

The advisory group that Clark recently appointed is an expensive interim solution (the five members get paid between $515 and $818 a day each) until the Health Ministry gets its own house in order. It includes some very familiar names (eg Karen Poutasi, Lester Levy) who – for all their institutional knowledge – have been part of the current system for so long that they can hardly be expected to bring much in the way of fresh, outside-the-box thinking to the table. For that reason, it would have been more re-assuring if someone like Philip Bagshawe – who has been working with (and researching) unmet need in the public health system for a very long time – had been included in Clark’s advisory group. With Health, the fear is not that there’ll be wholesale change; it is more scary to think that there won’t be.

As happened with Elvis Presley, the mainstream media in France used to be so ambivalent about Johnny Hallyday in life – they were embarrassed by his music, and by his fans – and therefore, were ill-equipped to deal with the scale of emotion that was unleashed when Presley and Hallyday died. The public not only loved the music of these performers, they identified with their lives, readily forgave their excesses, and mourned their loss. Once that kind of identification has been forged – and Princess Diana was another classic case – the media has had to retreat to non-explanations ( eg mass hysteria ) to ‘explain’ why people see themselves writ large, in such personalities. It’s a complete mystery to chose who choose other class heroes.

Supposedly, the Damascus moment for Hallyday was the sight of Elvis Presley as Deke Rivers – the ordinary truck drivin’ guy who becomes a rock star – in the film Loving You. So here’s Hallyday’s “Quelque Chose De Tennessee”…

And here’s Elvis Presley, as the working class hero who inspired Jean-Philippe Leo Smet to become Johnny Hallyday. Even in this finale, Presley is still wearing the blue denims he was wearing when he first performed this song at the outset of the movie…