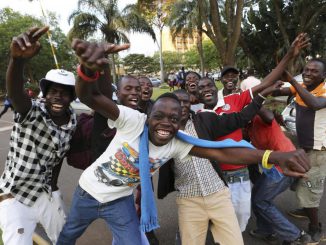 Robert Mugabe = Hosni Mubarak. The current jubilation on the streets of Harare at the fall of Zimbabwe’s dictator Robert Mugabe is genuine, and one hates to be negative about the country’s future. Yet the situation is eerily similar to the scenes in Cairo in early 2011, when a popular uprising swept Hosni Mubarak from power in Egypt. As Mugabe has done, Mubarak had systematically looted his country for decades, while being consistently ‘re-elected’ in any number of rigged elections.

In both countries, the fatal break with the Army occurred over the question of succession. Mugabe had arranged for his wife Grace to succeed him, and Mubarak had similar dynastic ambitions for his son, Gamal. Finally, the Army elite that had actively shared in the corruption for so long came to regard change at the top as a necessity, if only to maintain their own lucrative position at the trough.

In both Harare and Cairo, the Army cynically used their sudden popularity with the ‘liberated’ masses on the streets, to carry out the transition of power from the old dictator. (There have been many reports from Harare of people gratefully hugging soldiers. Long may that last.) The chilling precedent for Zimbabwe…? If anything, the current dictatorship in Egypt of former general Abdel el-Sisi is even more brutally repressive than his predecessor. The flowering of democracy that occurred under the Arab Spring in early 2011 has been crushed. The student leaders, the demonstrators, the journalists, the artists have been systematically, killed, jailed, exiled or otherwise silenced. The world now happily trades with el-Sisi’s corrupt elite and he gets feted at the White House, regardless.

The only hope in Zimbabwe is that the genie of democracy has been let out of the bottle and may not be able to be put back in again before the elections due in 2018, assuming that the Army will not now ‘postpone’ them. Reportedly, Mugabe’s successor as President will be Emmerson Mnangagwa (aka “The Crocodile”) and this prospect doesn’t inspire much hope. For decades, Mnangagwa was one of Mugabe’s most senior henchman, as his spymaster and security chief. In that role, he orchestrated the Army massacres in Matebeleland in the 1980s that killed hundreds of thousands of Ndebele tribesmen seen as loyal to Mugabe’s then-rival Joshua Nkomo.

Later, he oversaw the rigging of the ‘democratic’ elections that kept returning Mugabe to power, thanks to Mnangagwa’s efforts as chief administrator of Mugabe’s Zanu-PF party. Ultimately, it was the firing of Mnangagwa as vice-president and the attempted installation of Grace Mugabe in his place, that finally impelled the Army to mount their coup, remove Grace’s clique and thus install the 75 year old Mnangagwa in the presidential palace. Zimbabwe deserves a lot better. But chances are, a world that can do business with Abdel el-Sisi can surely find room at the table for Emmerson Mnangagwa.

Talking of comparisons between leaders separated by time, geography and ideology… Already, one way that the Ardern administration resembles its predecessor is that it is a far more formidable force in the House when its leader is present, than when she isn’t. Time and again, John Key would have to rescue his colleagues from bungles that were largely of their own making. Already, Jacinda Ardern is carrying out the same task of saving the government from its own mistakes. Like Key, she appears to have sharper political instincts than the rest of her front bench, and a related ability to defuse government attacks and turn them to her own team’s advantage.

Can the new government draw any early lessons from its early gaffes? Since the House is going to be a major battleground, it seems mystifying that Chris Hipkins should have been given such an unsustainable workload. Hipkins is not only Leader of House and Ministerial Services Minister, but the Minister responsible for the entire field of Education (including the Tertiary sector) and Minister of State Services. Inevitably, an over-stretched and gaffe-prone Hipkins will be a magnet for National’s lines of attack.

The drug related death last week of 21 year old charismatic rapper Lil Peep wasn’t exactly unexpected. Even his manager said this was a phone call he’d been expecting for almost a year, given his client’s lifestyle and battles with depression. Tragic though; besides everything else, the guy was a compelling performer.

One of Peep’s breakthrough tracks ‘White Wine’ had made effective use of a sample from the Microphones’ influential The Glow Pt 2 recording. Since its release in 2001, this double album by Phil Elverum (who now records as Mt Eerie since retiring the Microphones’ moniker in 2003) has steadily picked up the kind of cult following that a previous generation afforded to the works of Neutral Milk Hotel. Here’s the brief, mournful instrumental track that Lil Peep chose to sample:

And here’s ‘White Wine’ in all of its bored and wasted grandeur. The line about the ‘pretty white bitch who hopped up in my ride’ can be taken literally, or as a metaphor for the anti-depressant that finally killed him. Any way you look at it, ‘Lord, why Lord, do I got to wake up?’ is a sad sentiment from any 21 year old, or from anyone at all.