Zimbabwe, on the morning after…
by Gordon Campbell 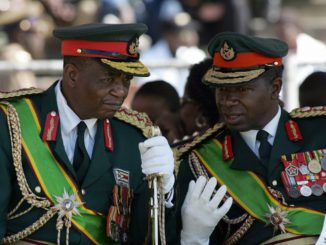 About forty years ago, the late Alexander Cockburn wrote a satirical piece on the language required to become a successful foreign correspondent. In his opinion, the job consisted largely of firing volley after volley of clichés into the densely packed prejudices of the readers. Thus, NATO is always in crisis. Turkey is always grappling with the legacy of Ataturk, its sky aglow with the gilded minarets of Byzantium. France, beset by so much Gallic logic, is always grappling with the legacy of Descartes and De Gaulle. In Italy, Venice is always sinking, workers are always striking, but the opening to the left remains elusive. Spain is still afflicted with the Basque problem. Indonesia is a teeming archipelago: there was a massacre but the wounds are healing. Or if not, the schisms still run deep and much bitterness remains. There are Moslems. There is also much US investment, which so far has done little to adjust the stark contrasts between rich and poor.

Hong Kong: a time bomb, but also a listening post. Japan – what about rising militarism? What about soy sauce? The immense enigma of China is now merely enigmatic. In the Philippines, a series of dictators are always brushing questions about democracy impatiently aside, as they vow to stamp out corruption.

Which brings us on to Zimbabwe, the day after the party. The treatment of deposed leaders, Cockburn wrote, constitutes a useful sub-category in itself. Is he being unceremoniously bundled into exile, long rumoured to be ailing, but dominated by an ambitious wife whom many insiders believe to hold the true reins of power ? In his last days, Robert Mugabe managed to tick all those boxes. And what are we to make of Emmerson Mnangagwa, the intimidating fellow who orchestrated the Army coup that deposed Mugabe? In the coming months, the conclusions will hinge on how much slack the West is willing to cut the new boss. Cockburn, again offers useful insights on the likely tone of media coverage:

“If he is one of our dictators then use words like dynamic, strong man, able. He laughs a great deal. Is always on the move, in a hurry. He brushes impatiently aside questions about franchise and civil liberties; “My people are not yet ready for the amenities you in the West feel free to enjoy.’ If on the other hand, he is one of their dictators, then use words like unstable, brooding, erratic, bloodthirsty, indolent. He seldom ventures out of his palace unless under heavy guard. He is rumoured to be ailing. Oddly enough, he is often charismatic.’

At 75, Mnangagwa is not exactly what you’d call a new broom. As many observers have pointed out, his track record has been one of unswerving dedication to Mugabe ever since the days of anti-colonial insurgency. Subsequently, he oversaw the bloody massacre of thousands of Ndebele civilians loyal to Mugabe’s main political rival, Joshua Nkomo. More recently, it was Mnangagwa who engineered the power sharing deal in the late 2000s between Mugabe and democracy advocate Morgan Tsvangirai, shortly before Tsvangirai sustained life threatening injuries in a head-on car crash that killed his wife.

The falling out with Mugabe two weeks ago came only after Mugabe attempted to build a dynastic succession around his wife, Grace. Mnangagwa fled to South Africa, from where he orchestrated an Army coup led by his long–time ally, General Constantino Chiwenga, head of the country’s armed forces. To these guys, things had to change in Zimbabwe, so that things could remain the same.

No doubt the West will want to see the new government “succeed” – whatever that may mean. Yesterday, Foreign Policy magazine did a fine job of outlining the two credible paths that events could take during the run-up to the elections due in August 2018. In all likelihood, Mnangagwa will bring in a few figureheads to allay the concerns of (a) the West’s bankers and (b) the demands of his people. People such as Morgan Tsvangirai, former finance minister Tendal Biri and former vice president Joice Mujuru may be invited on board. Yet there is also the possibility that Zanu-PF could try and go it alone. After all:

Zanu-PF has built a well-oiled machine for dominating the country and stage-managing elections. In fact, Mnangagwa is one of the creators of that system of repression and control, which has enriched a small cabal at the top through a vast empire of corruption. Mnangagwa may entice one or two opposition leaders to play a ceremonial role, but he is unlikely to cede any real influence. This is essentially what happened during the last government of national unity, from 2009 to 2013, when the opposition was given a nominal seat at the table after Mugabe unleashed a campaign of killings, torture, and rape to steal the 2008 election.

As FP indicates, Zimbabwe’s old colonial power Britain and powerful neighbour (South Africa) are already showing a readiness to let the old power structures remain in place, so long as some lip service is paid to the processes of democracy:

Sadly, South Africa and former colonial power Britain have reportedly already indicated that they prefer short-term stability over long-term reforms. They might be willing to give Mnangagwa five years as president to show what he can do. As a result, their credibility among opposition groups as honest brokers has vanished. Indeed, one of the themes of the demonstrations over the weekend was for South Africa to keep out.

Ironically, the United States could prove to be the immediate impediment to the West’s rush to embrace Mnangagwa and the lootocracy he has done so much to engineer:

The Zimbabwe Democracy and Economic Recovery Act, passed with bipartisan support in 2001, sets out strict conditions for U.S. re-engagement, including the lifting of targeted sanctions and debt relief. Mnangagwa and Chiwenga, the military chief, are still listed among the roughly 200 individuals and entities sanctioned by the U.S. Treasury Department. To have their assets unfrozen and their ban on doing business with Americans lifted, they will need to convince U.S. officials that they are no longer undermining democracy and the rule of law.

Time is at a premium. The country is enduring a desperate food shortage. Currently, the Zimbabwe economy is facing a cash crunch, and a $5 billion arrears bill stands in the way of the granting of fresh lines of credit. Again, while the US endorsement of the new government will be crucial to it gaining new loans, the support of the Trump White House can’t be taken for granted:

For the last two years, Washington has resisted British attempts to arrange a financial bailout for Mugabe. Before it agrees to a debt relief package, the United States should insist on elections that are credible, free, and fair… [Even so] Zanu-PF has shown a remarkable ability to resist reform, even under the most trying of circumstances. Just as Mugabe inexplicably clung on to the bitter end, the looting machine he is leaving behind may keep on running, regardless of the cost.

But… perhaps we should not tarry too long with the details. As Alex Cockburn concluded, so long ago:

Reporting of famine and mass starvation holds little consistent appeal for Western readers, and unrestrained speculation about the probable number of dead (one million, two million, ten million) merely bewilders and depresses people. Stick to the main highways of Western diplomacy and American policy. Remember that your cliche hoard is for consolation and affirmation, never be premature in any criticism of your nation’s policy. Remember that the world turns slowly and that almost without exception what was true about a country ten years ago is still true today. Life goes on as usual. Bear in mind Lord Northcliffe’s sage advice to journalists: “Never lose your sense of the superficial.” Happy landings.

Malcolm Turnbull, On the Ropes

Talking of keeping a sense of the superficial… probably, Jacinda Ardern needs to be aware that when dealing with the Aussie media, questions about whether she likes to sometimes “Netflix and chill” with Clarke do not actually have television viewing in mind. After saying in a radio interview that yes indeed, he often liked to kick back and “Netflix and chill” with his wife, Aussie PM Malcolm Turnbull was among the last remaining Australians to find out that this term is actually a euphemism for sex.

Poor Turnbull has had a bad week. During another radio interview in which the recent death of AC/DC founder Malcolm Young came up, Turnbull couldn’t name a single AC/DC song. Gamely, Turnbull’s staff then tried to compensate, and made matters worse:

In a misguided attempt at damage control, the Prime Minister’s Office then asked voters for help.”Alright, alright. The PM needs a refresh on his Aussie music. So we’re making a playlist, starting with @ACDC and a bit of @braithwaite_d [Daryl Braithwaite]. Tweet us your suggestions.’

While the official retweets indicate all he got were predictable names such as Jimmy Barnes, John Farnham, Cold Chisel and Paul Kelly (because the only Australian artists worth noting are men), the replies show Australia had other ideas. The Prime Minister’s Office may as well have said, “tweet us your most expletive-laden insults”, given the songs that came back. The Skyhooks’ Why Don’t You All Get F—ed, Joe Dolce’s Shaddap You Face and various unprintable titles by TISM are just a small cross-section of the choices….

Clearly having Ardern being persistent about the Manus refugees is currently the least of Malcolm’s worries.

Apparently, Melbourne’s Camp Cope are on the brink of releasing a new album. Great news: for the past couple of years they’ve been the only essential Australian band. Tracks like “Stove Lighter” “Lost Season One” and “Jet Fuel Can’t Melt Steel Beams” have all been showcases for the group’s incandescent singer/writer/guitarist Georgia “Maq” McDonald. Maq is to the ferocious fore again in the new single “The Opener” which mounts a detailed attack on the music industry’s unconscious sexism…

Yeah, I know… at one level this is shooting fish in a barrel. But as the Aussies would say, its how she does it.

Here’s a case of not shooting said easy fish. Hardly anyone else could pull off a cover of The Yeah Yeah Yeahs’ classic “Maps” but in this live version, Camp Cope and Maq go for broke, and make it their own.