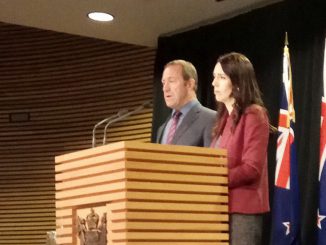 Much of the sympathy the public still feels for the families of the Pike River miners has been sustained by the sense that the previous government – let alone the mining company and the processes of receivership and litigation – has never dealt honestly, or fairly, with them. Finally, yesterday’s announcement by the Ardern government that a new state agency will be set up to assess and plan the manned re-entry to the mine (on a set timetable) goes a long way to meeting the families’ remaining request: that they be enabled, if at all possible, to bury their loved ones. The previous government made those noises too, but was woefully short on delivery.

This new effort is the least that can be done, given the role that successive National and Labour governments played (in legislative changes made in 1993) that fatally weakened the framework of health and safety protections available to New Zealand workers. Subsequently, the Pike River Royal Commission found those regulatory changes led directly to the disaster. The Commission laid blame at the feet of the senior management and board of directors: “The board of directors did not ensure that health and safety was being properly managed and the executive managers did not properly assess the health and safety risks that the workers were facing…”

It also blamed the government: “the Department of Labour did not have the focus, capacity or strategies to ensure Pike was meeting its legal responsibilities under health and safety laws. The department assumed Pike was complying with the law, even though there was ample evidence to the contrary”.

Right. As a result of the Pike River findings (and the tireless efforts of the late Helen Kelly of the CTU) our health and safety laws have been changed, and our workplaces should now be safer as a result. Arguably, hundreds of thousands of workers in this country have come to benefit subsequently from the loss experienced by the Pike River families. True, some people may begrudge the cost of the Royal Commission and related litigation, and bemoan the $23 million that’s now been budgeted for the new agency – which will be set up at the end of January 2018, with the aim of completing recovery by March 2019.

That cost is peanuts though, especially given the ongoing benefits from the lessons learned from Pike River. Obviously, money cannot compensate for the loss of a partner or family member. Yet as Milford Assets pointed out in 2013, secured creditors like the BNZ got paid in full ($50 million) from the insurance proceeds, while the Pike River families received a comparative pittance, especially when compared to overseas mining disaster precedents involving the same number of fatalities. Currently, the National party is spinning the claim that the new government has softened its stance on re-entry, and has adopted its own approach. Hardly. The Pike River families certainly aren’t buying that line. The Key/English administrations effectively excluded the families, discounted their experts, and strung the families along about the potential for re-entry, with no closure date in sight.

By contrast, the new agency’s approach will be inclusive, all available expertise will be drawn upon and the families will be regularly advised of progress, with fixed dates for decision. The risks of re-entry will be openly weighed, and the buck for any subsequent mishap would stop with Pike River Recovery Minister Andrew Little. That’s somewhat ironic, given that in the immediate aftermath of the disaster in 2010, Little – then head of the EPMU – had initially defended the mine’s health and safety record.

Given that the recovery would not be risk free, I asked Little yesterday, would the employment rights situation enable the workers involved to refuse any call for them to carry out the tasks of re-entry? Yes, Little replied, the current health and safety laws would enable such a decision to be made by workers, right up until the day of re-entry. By March 2019, this sad story will be resolved, one way or the other.

Into the Hornet’s Nest

Defence is one of those areas of government spending that involves (a) the spending of colossal amounts of taxpayer money and (b) Ministers making decisions with their eyes glued to the rear view mirror. According to the conservative tip sheet Transtasman ( Nov 8 edition) Defence Minister Ron Mark is looking at the feasibility of re-instating the air strike capacity of the Air Force, by buying the Royal Australian Air Force’s old F-18 Hornets, as the RAAF moves on with a planned upgrade to new F-35 fighters.

At yesterday’s post-Cabinet press conference, I asked PM Jacinda Ardern whether restoring the air strike wing was likely to be seen as a budgetary priority for her government. In reply, Ardern gave her usual response to queries about Defence spending – namely, that Labour will honour the spending commitments envisaged by the prior National government, but no more. Those commitments entail the replacement of our current frigates, Orions, Hercules etc, to the tune of some $20 billion over the next 20 years. Any additional elements – such as the air strike capability – would have to go to Cabinet, Ardern indicated, and be judged on their merits.

Fine. Yet according to Transtasman, Canada is also after those Hornets, and Ottawa will be advised by year’s end about whether its expression of interest will be embraced by the Australians. If there is a fiscal envelope in New Zealand for Defence of $20 billion over 20 years, it is still unclear how itemised that projected spend-up may be. Meaning: if Mark sought to front-end the process with a bid for the Hornets, could that create a fait accompli that short-changes the rest of the Defence shopping outlay that’s due a bit further down the track, during the early to mid 2020s?

In terms of job creation, the massive projected Defence spend is mainly going to benefit Aussie shipyards likely to be building our new frigates. Buying old fighter planes off the Aussies would be another bonus for them, and – arguably – could sweeten any relations with Canberra that may have been soured by the Manus refugees issue. At least that’s how Mark and his NZF boss – Foreign Minister Winston Peters – might argue this possible Hornets investment, unless told otherwise. As things stand though, any attempt to outbid the Canadians on the Hornets would displace other expensive priorities – the Hercules, the frigates, the Orions – that rank higher up the shopping list.

On any rational grounds, trying to restore New Zealand’s air strike wing makes no sense at all – either militarily, or in terms of value for taxpayer money. Besides the initial capital outlay for the Hornets, even Transtasman concedes that it would take nearly a decade of investment to rebuild the air strike wing “into an effective force.” Moreover, we’re operating in a security environment in the Pacific where not even Defence’s internal assessments can conjure up a realistic threat scenario. Here’s how the 2014 Defence Force Assessment painted the situation:

Para 66. New Zealand does not presently face a direct threat of physical invasion and occupation of New Zealand territory. The likelihood of such a threat to the Cook Islands, Niue, Tokelau and territory over which we have a sovereign claim, emerging before 2040 is judged to be very low, and would be preceded by significant change to the international security environment. New Zealand could therefore expect to have a reasonable amount of time to re-orientate its defence priorities should this be necessary. Although there is no direct threat to our territorial integrity, New Zealand faces a range of other threats from state and non-state actors, including cyber threats and terrorism.

Plainly, frigates and Hornets aren’t any use in copingwith cyber threats and terrorism. Meanwhile, as we spend billions to defend ourselves against phantoms, schools and hospitals are putting the lives and wellbeing of New Zealanders (young and old) in harm’s way, for wont of adequate funding.

The now defunct Seattle band Posse has just released its latest (and last) recording, an EP called Horse Blanket. While the 12 minute title track is the band’s masterpiece, this opening track “Dream Sequence” is pretty typical of their strengths. Routinely, Posse conveys a quasi Velvets sense of wasted ennui, via the murmured to and fro vocal exchanges (between Sacha Maxim and Paul Wittman- Todd) and the backdrop of melodically inspired guitar noise that taps into all the urges that are lurking below the surface….if only they had the energy to get off the couch.

The end result is beautiful, superficially passive music for people transfixed by the minutiae of their boredom to the point where it feels like transcendence. “Voices” (one of Posse’s earlier B-sides) put the basic problem laconically :

If I saw you on the sidewalk
Would you give me a sign
Or would you be wary if I saw you?
And if I gave up all my hobbies
And you gave up yours too
Would we be okay, doing nothing?

For the pigeon-hole inclined, someone once said Posse were like Real Estate meets the Pixies. For their part, the band have name-checked The Church as heroes, and Wittman-Todd once dreamily told one interviewer that he found inspiration for his own guitar work “in the thought of a 40 minute guitar solo by Carrie Brownstein…” Here’s the EP’s opening track “Dream Sequence”:

If you like this, take the half hour required to listen to the whole Horse Blanket EP. The title track stands full comparison to “Marquee Moon” as a beautifully constructed piece of lonesome guitar shredding grandeur, woven together by the barely conscious interplay between the male and female vocals.

And finally… Youtube has the live KEXP version of “Shut Up” which was their biggest ‘hit’. It also has the “Perfect H” single from earlier this year, where the cryptic interplay between Maxim and Wittman-Todd is initially impossible to decipher, but worth the effort. In this band’s breakup songs, it isn’t as if heartache is pre-ordained; it feels more like an inevitability dictated by almost geological sweeps of time.