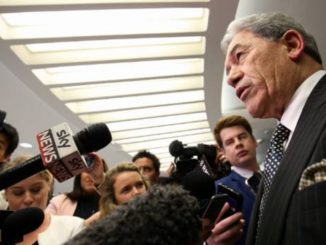 So how is journalism faring these days in its Fourth Estate role of (a) speaking truth to power, and (b) keeping its independent distance from those it seeks to monitor… you know, for the public good? Not so great. Of late, the relationship with power has often looked a lot more like one of active co-dependence, and never more so than in the current case involving Winston Peters. Already the press guardians and Bigfoots have expressed outrage at the fishing expedition that Peters has mounted, in his attempts to identify and punish the leakers of his superannuation over-payment details. Not accidentally, the news of that Peters overpayment came out at the very point in the electoral cycle when it could do the most electoral damage to New Zealand First.

Frankly, the outrage being leveled at Peters would have a lot more credibility if the newsbreak in question had been the by-product of dogged gumshoe journalism by the reporters concerned, as they ferreted out the relevant evidence despite the best attempts by the powerful to suppress it. You know, just like in the movies that the likes of RNZ’s Gavin Ellis still seem to watch.

Unfortunately though, the Peters revelation looked a lot more like an intentional leak by the powerful, timed to do the utmost damage to a political rival, and leaked to media outlets more than willing to serve as a conduit. Could be wrong about this, of course. It may prove to have been information prised from the grip of the unwilling – but somehow, I doubt it. So, big question… what happens to the credibility of the Fourth Estate role when journalism works not so much in the public interest of holding the powerful to account but instead works (a) in its own interest for hot news fodder, and (b) in the interests of the powerful who feed it, and on whom it is willing to become dependent? When that happens, does the media still deserve the protections it claims as its due – and who is to decide?

As I said, the words that seem more apt in the Peters case are ‘co-dependence’, and ‘mutual self-interest’ – which are concepts hard to paint in heroic, pro publica terms. This trend is on course to get worse. The decline of journalism’s financial base and the demands of the 24/7 news cycle are likely to make the media ever more dependent upon those able to feed it the juicy stuff, pre-packaged. Again, it seems delusionally self serving for journalism to claim that this arrangement is quite OK, because next week it will bite the hand that fed it last week. That’s not good enough.

Surely, the initial question to be asked is – what is the prime interest being served in each case, and on its merits? The over-riding principle is supposed to be the public interest. That’s the basis for the Fourth Estate protections that the media enjoys. But in reality… if it is mainly the government’s interest that is being served in targeting its enemies, and/or or the media’s own interest in being first with the salacious gossip – then the justification is eroded.

Basically, individual journalists have to retain the motivation, and the ability, to say no when they’re handed a hatchet, and pointed towards a target. Because otherwise, journalism has no credible defence when the likes of Peters come fishing for the evidence of who leaked what, to whom. On the terms now extant, Peters has been handed the right to do so. And the fault for that sorry outcome cannot be laid entirely at his door.

Talking of media hatchetings… the Rwanda tribunal human rights work done previously by Greens MP Golriz Ghahraman has been a classic beat-up. Did she do anything wrong by working for the defence at the UN International Criminal Tribunal on Rwanda? No. Is such work a contributiuon to the cause of justice? Yes. Given the well-documented struggle for credibility that the UN Rwanda tribunal went through, the establishment of credible processes of prosecution and defence were a necessary part of its evolution. Before the election, had Ghahraman hidden the fact that she’d worked on both sides of the fence? No. She’d told NZ Herald’s Kirsty Johnson of her defence work in the course of an interview for a story published well before the election in September.

As Tess McClure has pointed out, Ghahraman also spelled out her feelings about the morality of her defence work at length with McClure in this story for Vice that included this exchange :

Sure, but did you find that personally difficult? You’ve come from a strong background of advocacy, did you find it difficult defending people who have done these things?

No. Because I believe so strongly in the process. If you’re going to convict someone, we need to actually see, you have to know what those individuals were actually responsible for, we have to have a fair process, because how we treat the weakest links or the worst people in our society actually does define us. Having that fair process after a war has happened really will define the kind of society that comes out of it.
So you know, to me, it is really important to have a strong defence in those courts, so that the verdicts were safe, and we left a model of justice for the community.

In short, the bucketing of Ghahraman has been a useful illustration of the best and the worst about current journalism. Terrible accusations have been leveled at her – liar, hypocrite, genocide denier – on the flimsiest of pretexts. Thankfully, those claims have also inspired some excellent work in rebuttal. Notably, by Andrew Geddis in two pieces on Pundit that you can (and should) read here, and also here. I won’t try and paraphrase Geddis, but this passage of his gets right to the point:

Defending nasty individuals is just a part of what international human rights lawyers do. Consider the example of probably the world’s most famous such lawyer, Amal Alamuddin (now Clooney).Yes, she’s represented the Armenian people in an effort to have their genocide recognised, advocated for the Yazidi people and stood in court for the Chagos Islanders. But she’s also represented “the dictatorial King of Bahrain, Hamad bin Isa al Khalifa; Abdullah al Senussi, former intelligence chief to the late Libyan leader Muammer Gaddafi; and WikiLeaks founder Julian Assange.”

That’s because the point of the international human rights project is to create global institutions that can implement the rule-of-law practices we expect in nice, rights respecting places like New Zealand. So, when you’ve got someone accused of genocide in Rwanda, you don’t just summarily execute him or leave him to rot in a hole. You determine whether or not he actually did what he’s accused of, then punish him accordingly.

Exactly. The UN International Criminal Tribunal on Rwanda had a rocky progress. It had brought together justices of variable ability from quite different legal jurisdictions – and its initially glacial rate of progress saw the establishment in parallel during the 1990s of local community “Gacaca” courts within Rwanda that dealt out what was often summary justice. Even by the time the UN Tribunal got properly on the rails in the 2000s there was a disconnect between its own work, and the situation on the ground in Rwanda. As this Vassar University overview of the Tribunal’s work concluded the whole process may have contributed more to the clarification of how genocide claims should be handled within international law than it did to actual reconciliation within Rwanda:

In our qualitative research, we found that many Rwandans felt that the work of the ICTR was far removed from their daily lives. Respondents complained that the trials were held far away from Rwanda and were organized using Western-style judicial practices that place a heavy emphasis on procedure and have little concern for community interests. As such, the trials have been better vehicles for establishing international law than for contributing to the process of rebuilding Rwandan society… Many respondents saw the adversarial legal approach applied in the ICTR as foreign to traditional Rwandan methods of conflict resolution, in which communities would come together and determine the nature of events and the punishments and reparations needed to re-establish social equilibrium. While the majority of the population is not hostile to the ICTR (in contrast to the impression commonly given by the government), people tend to see it as an activity of the international community being conducted primarily for its own benefit, with little relevance to processes of reconciliation in Rwanda.

No doubt, the Greens can be irritatingly sanctimonious at times. But so can Steven Joyce. And Ghahraman’s frankness about her past career has made for an interesting contrast with another politician – former PM Bill English – whose own party also packaged him in glowing personal terms. Throughout 2017, we all heard a great deal about Honest Bill, the no frills, straight shooter from Dipton etc even while English peddled patent untruths about the Barclay affair, and Labour’s tax plans. Ultimately, if the likes of David Farrar and Jordan Williams want to campaign for political truth in packaging, maybe they should start closer to home. Because in that regard, Golriz Ghahraman seems to be the least of our problems.

David Lynch is not the only person able to mine a vein of strangeness out of those 1960s girl group conventions. “Sororal Feelings” was the first track on Half Free, the 2015 album by Meghan Remy’s band US Girls, and the singalong chant at the heart of the proceedings went something like : “Now I’m gonna hang myself/hang myself on the family tree…” It turns out this was the narrator’s response to her discovery that the guy she married had slept with her three older sisters before settling on her.

Welcome to Remy’s world. ”Sororal Feelings” was a good example of Remy’s talent for combining disturbing scenarios (most of them dealing with power dynamics between men and women ) with conventional girl pop tropes, in a way that only upped the ante on the general sense of clamminess and desperation. On the very next track on Half Free for instance, a woman grieves angrily for the soldier boy she had staked her plans for life upon:

News came when I was all alone
Friendly fires across the telephone
And now there’s only one thing I know:
Where is my man?

Cause there ain’t even bones for me to own
And I can’t believe I won’t see you no more
And I didn’t marry you to be alone
Where is my man?

Remy’s music is also notable for its explicitly cinematic scale. The single “Velvet 4 Sale” (from the group’s new album In a Poem Unlimited) deals with domestic violence, but the video is like a mini-movie with multiple layers – Remy plays a cop with all the power that supposedly brings to the table – and the resolution is one I certainly didn’t see coming :

Finally, here’s Remy and US Girls with a spooky live version of “Sororal Feelings…”