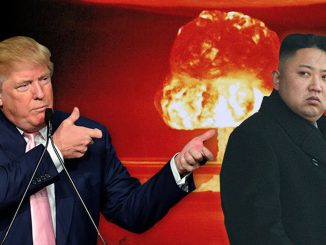 Hard to see how the North Korean crisis can be resolved peacefully, given the US has no realistic, achievable goal in mind. Currently, the game plan seems to be that if North Korea is (a) threatened harshly enough and (b) its economy is squeezed hard enough, it will suddenly surrender and voluntarily dismantle its nuclear weapons programme. Since the North Korean leaders regard those weapons as being their only reliable means of self defence against a US invasion, regime change and their subsequent execution, that’s very, very unlikely.

That’s what makes this impasse so different from the Cuban Missile Crisis of 1962, which was the last time the world overtly stood on the brink of thermonuclear war. That crisis was eventually resolved by frantic behind-the-scenes negotiations, and by concessions offered on both sides. Given his repeated dismissals of the value of diplomacy, its safe to say that if Donald Trump has been the US President back in 1962, none of us would be here right now. What, if anything, is New Zealand suggesting to its friends in Washington to try and deter the US from ignoring a diplomatic solution to this crisis?

Back in early August, Bill English described Trump’s rhetoric (this was when Trump was threatening to rain down “fire and fury like the world has never seen”) as being “not helpful” in what was a “very tense” situation. And then English added this:

New Zealand had not expressed its concern to the US, English said, but would do so if Trump continued to make similar remarks.

Well, since that time in early August, Trump definitely has made many similar remarks. In the past few days alone, Trump has twice tweeted messages that undermined his Secretary of State’s efforts in Asian capitals to reach a diplomatic solution. As in : “I told Rex Tillerson, our wonderful Secretary of State, that he is wasting his time trying to negotiate with Little Rocket Man” and for good measure, “Save your energy Rex, we’ll do what has to be done!” This, only a week after came this threat : “Just heard Foreign Minister of North Korea speak at U.N. If he echoes thoughts of Little Rocket Man, they won’t be around much longer!”

So… given the escalation in threats of military action from the White House, when will our PM keep his word and express New Zealand’s concern about Trump’s apparent preference for a military solution? Moreover, is the de-nuclearisation of North Korea really a goal that New Zealand still sees as being achievable? Some in the US Senate (and reportedly, the majority view of US intelligence agencies) think that it isn’t a practical goal any more.

Sen. Bob Corker, R-Tenn., said North Korean leader Kim Jong Un views nuclear weapons as “his ticket to survival” and there’s virtually nothing to make him turn back. … Corker said that while he applauded Tillerson’s efforts, the secretary is “working against the unified view of our intelligence agencies.”

Echoing Corker’s concerns, Sen. Mark Warner, D-Va., said “there may be a contradiction between the conclusions of the intelligence community and what the secretary of state is trying to do.” “It’s a really thorny issue,” said Warner, who also is vice chairman of the Senate Intelligence Committee. He called the findings of the intelligence agencies “fairly chilling.”

Sen. Brian Schatz, D-Hawaii, said the long-term objective of halting North Korea’s atomic arms program may not be achievable at all.

Well, do we still think it is achievable? And if we don’t…what are we doing about it? The reality is that the world has learned to live with India, Pakistan and Israel becoming nuclear powers alongside the US, Britain, France, Russia and China. Isn’t it time therefore, for New Zealand to argue at the UN (and elsewhere) that the only safe way for the world to de-escalate this crisis is for everyone to treat North Korea’s nuclear status as a fait accompli –– and then try to engage with Pyongyang, diplomatically and economically? Someone has to make that case. Paradoxically, the only way to get North Korea to disarm long term, is to allow them to arm, short term.

Meanwhile, is it possible for the US – or South Korea, or Guam – to install an anti-missile system that’s good enough to take out any incoming missiles that the North Koreans might choose to launch? The Pentagon appears to think so, and plans on shifting an initial $416 million around its budget, in order to augment the US anti-missile system.

Roughly, here’s the situation as outlined by Foreign Policy magazine :

If approved, $136 million would go toward building 20 new silos and 20 new missiles for the Ground-Based Midcourse Defense (GBMD) system based in Fort Greely, Alaska. The rest of the money would fund upgrades for four U.S. Navy Aegis Ballistic Missile Defense ships, and work on radar systems in Hawaii and Alaska.

But will it work? Probably not:

Missile defense expert Kingston Reif tweeted Wednesday evening that the GBMD system has a spotty record at best, and pointed out that there are “serious concerns about the technical viability of this system, which was rushed into service in 2004 by the Bush administration. The system has a flight intercept test record of less than 50 percent.”

Back in May, Reif explained the difficulties of devising a reliable defence screen against incoming missiles from North Korea, and showed just how far the

US is from being able to deploy a defence system that works even 50 per cent of the time. Regardless, huge sums have been spent on the attempt since 1985 with more still to come:

According to Missile Defense Agency estimates, Congress has appropriated roughly $190 billion for the agency’s programs between fiscal years 1985 and 2017…..For nearly two decades, U.S. ballistic missile defense policy has sought to protect the homeland against limited long-range missile strikes from states such as Iran and North Korea, but not major nuclear powers Russia and China, since that mission would be technically infeasible, prohibitively costly, and strategically destabilizing. The United States has also pursued programs to defend U.S. troops and facilities abroad, and some close allies, from attacks by ballistic missiles.

And yet, according to the Defense Department’s independent testing office, existing U.S. missile defenses possess only a “limited capability” to defend the U.S. homeland, troops deployed abroad, and U.S. allies from small numbers of ICBMs, IRBMs, and MRBMs. Their capability against short-range ballistic missiles ranks a bit better at “fair.” Apart from the point-defense Patriot system, no systems in the current U.S. arsenal of ballistic missile defenses have been used in combat. For these limited fruits, America’s costly pursuit of missile defenses has also been a decades-long irritant in the relationship with Russia, and increasingly in recent years, China.

It seems that unless the North Koreans helpfully told the US beforehand of its intentions – when, where and how many missiles it had fired – the defence shield probably wouldn’t work. At best, the shield might deflect the nuclear missile and explosion onto adjacent friendly territory, such as Canada. Reif’s article is a useful reality check.

But it won’t stop the Pentagon and defence contractors from chasing the big bucks involved.

Oh, and how’s the forgotten war in Afghanistan going? Not so good. The Taliban now control about 45% of the country.

Sure, you could argue the rural nature of the Taliban insurgency is always likely to give it control of swathes of territory, while the Kabul government still holds sway over the big urban centres that contain most of the population… but there’s a good historical reason to feel concerned about that scenario. Here’s how cheerily the CIA were regarding the same urban/rural situation in Vietnam, only ten months before the fall of Saigon:

“Despite periodic fighting in many parts of South Vietnam since the January 1973 cease-fire, relatively little population and territory have changed hands. Saigon still controls the vast majority of the people as well as most of the economically important land. The Communists hold a fairly wide swath of territory along the western portion of the country, but they control only some 5 per cent of the country’s population.”

Tom Petty’s heart attack could be marked by dozens and dozens of great tracks, given his songwriting skills and the beautifully co-ordinated machine that the Heartbreakers routinely were, on stage. I stumbled across the first album in a record shop in Denver in 1977 and the killer segue from “Mystery Man” to “Luna” near the close of that record became a personal oasis. Here’s “Mystery Man” from a Winterland SF performance in 1978:

To my mind, Petty’s ballads have lasted better than the rockin’ uptempo tracks. Here’s the anguished “Insider” from the Hard Promises album in 1981, a song about his marriage to Jane Benyo and the difficulties that came in its wake, for more than a decade – in the lyric, Petty sings about the circular deceptions, the cage without a key, the hard promises to which he was committed.

This out-take “Keeping Me Alive” for French TV is both a great song, and a showcase for Petty’s ordinary Joe lyric writing :

I got a job, I work hard
These days the money don’t go very far
It’s hard enough keeping gas in the car

But when she’s riding in the car there beside you, love will pull you through…

Here in my heart, right by my side
Honey you’re getting me by
Yeah you’re keeping me alive