From here on, his power will diminish….
by Gordon Campbell 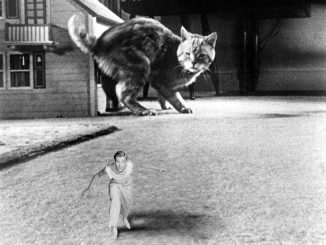 A lot of people in New Zealand seem to resent Winston Peters and the power that he appears to have. “Appears” being the operative word. In reality, Peters will have power only up to the point that he uses it. By next week, he’ll have become just another junior player in an MMP governing arrangement, battling to hold onto the gains he was promised. He will diminish by the day, much like the hapless hero of the classic 1950s science fiction film, The Incredible Shrinking Man.

In 1996, Peters tried to ward off that inevitable decline with a long and prescriptive coalition document… but even that didn’t save him or his New Zealand First colleagues from being heavied subsequently by National, and the coalition agreement didn’t survive the experience. Neither did Jim Bolger, or NZF’s fabled “tight five”. This time, Peters won’t even have a detailed written coalition document as a paper shield. Yes, he chooses the next government. For any MMP junior partner, it is like a choice between strychnine and cyanide. Survival will become a struggle, either way – with the initial policy payoffs always being at the mercy of the senior partner.

Sure, all of us have a vested interest in who that senior partner might be. To date, most of the speculation has revolved around the points of policy convergence and divergence, and the lists of possible demands and concessions. All very diverting, but it is more interesting to speculate about the legacy implications of the choice Peters will eventually make. Like him or not, Peters has been a major figure in this country’s politics for three decades, and this week’s decision will define how he will be remembered.

If Peters chooses National, it would be like a lapsed Catholic returning to the church on his political deathbed. The years of apostasy – the decade or two of dabbling with New Zealand First – would fall away, as Peters returned to the political party from which he first emerged. It would be hard not to see that as a concession, if not as a defeat. Did Winston Peters really work so hard and for so long simply to end up as the centre-right’s equivalent of Jim Anderton, home again to enjoy a few baubles and a couple of vanity projects during twilight’s last gleaming…?

If he goes with Labour and the Greens, the meaning of those prior decades would change accordingly. Instead of being a boomerang arc, Peters’ career would look more like a consistent trajectory into the future. The break he made with National in the early 1990s would have been meaningful.

Peters is a nationalist, more than anything else. (If he was Spanish, he’d probably be fighting today to keep Catalonia as part of Spain.) Some of the political forces that he saw as separatist are no longer in Parliament. Happily, the threat that market liberalisation poses to national sovereignty is in retreat all around the world, and within the Labour Party. Yes, Peters and many of his supporters certainly have their social and generational differences with Labour and the Greens, but these pale in comparison with the similarities between them on the more basic issues to do with economic sovereignty.

If Peters can lend his experience to an untried leadership, his career will continue to be significant. Otherwise, he’s just going to be a footnote in the history of the National Party.

One trip supermarket plastic bags seem to be on the way out here, as another supermarket chain vows to eliminate them.

Carnivores may still have a few transitional health concerns, since re-usable bags have been alleged to pose a health risk (from cross-contamination of bacteria) if care is not taken with cleaning those bags of any meat and fish residues.

This year, the bigger news on the recycling front has been the decision that China announced a few months ago to end its role in the recycling of many categories of “foreign garbage” (mainly plastic and mixed paper waste) as of January 1, 2018.

It seems reasonable to assume that China’s decision will soon end up having a considerable impact on our weekly recycling routines. For the past two decades, as Bloomberg News recently pointed out, China has been the world’s biggest importer of recycled material.

China’s recycling industry grew in parallel with its manufacturing boom. By the mid-2000s, scrap paper was among the leading U.S. exports to China by volume.

Within the US, some 40,000 jobs depend on that export trade. Many more Chinese depend on it. As for here… roughly speaking, and as this article indicates, New Zealand has a high level of local recycling of glass, and about a 50% capacity in recycling some forms of plastic. The rest of our plastic waste and all of our paper and card waste gets sold and shipped to Asia, primarily to China –where it has left in its wake some serious environmental problems related to unsafe forms of disposal.

With China a diminishing option in the near future, a campaigning shift in focus will have to occur, from plastic bags to plastic packaging. To some extent, this packaging travels on a round trip. Goods made and packaged in China are shipped to consumers in the US and then get shipped back again, for recycling. Similarly in our case, the packaging from all those made-in-China goods imported via our China free trade agreement goes into our recycling bins, and then gets sold and shipped back to China as scrap. As Bloomberg News concluded: “Foreign garbage is really just China’s recycling coming home.”

Not entirely, of course. Yet the cheerleaders for our FTA with China do need to pay far more heed to the environmental consequences of those imports. Now that the cheap (and out of sight/out of mind) option of shipping it off to Asia is being closed down (or transferred from China to somewhere like Vietnam or Japan) we’ll need to start working on local, inevitably more expensive ways to reduce and safely eliminate the plastic we are accumulating. It will not be an easy matter to reduce the extent of plastic packaging at source, given a lot of that packaging is related to safe and efficient transit.

An environmentally aware business figure like Sir Stephen Tindall could be an important voice here, given the extent to which his Warehouse chain carries imports made and packaged in Asia. One thing appears likely. Compared to this next stage in the reduction of plastic waste, the campaign against one trip plastic supermarket bags is going to seem like a walk in the park.

Nilüfer Yanya
At 22, Nilüfer Yanya is of Turkish, Irish and Bajan (ie from Barbados) background, and she’s one of the most promising artists in Britain, equally adept as a singer, guitarist and songwriter. This version of the title cut from last year’s Small Crimes EP is as good a place as any to start.