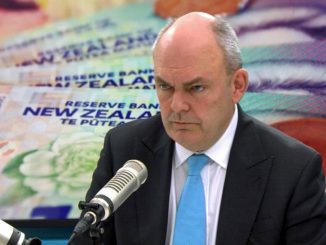 Like the kid in that Bruce Willis movie who could see dead people, Finance Minister Steven Joyce can see stuff (like holes in Labour budgets) that no-one else can see. So maybe it shouldn’t be all that surprising that Joyce can also see ‘efficiencies’ and ‘cost savings’ in funding major infrastructural projects through public private partnerships (PPPs).

Sure, pretty much everyone else in the world now treats PPPs as rorts that regularly end up costing the taxpayer more over time, while just as regularly delivering inflexible projects of inferior quality. Unfortunately, PPPs still have fans in high places here. To major corporates, PPPs may as well stand for Politically Provided Profits. And to Steven Joyce… well, he has a sixth sense about such matters.

Apparently, a rash of PPPs would be one of the main features of a fourth term National-led government. Assuming that’s OK with Winston Peters, National plans on setting up a new National Infrastructure Commission to manage the booming trade, which is planned to include:

* Defence Estate Refresh: a $1.7 billion project to modernise and upgrade defence bases throughout the country

*The $1.4 billion re-development of Dunedin Hospital

*Penlink: Construction of a new local road linking the middle of the Whangaparaoa Peninsula with State Highway 2 at Redvale

*Waikeria Prison: A new 1,500 bed facility due to commence procurement this year

Why should we feel concerned? Well, there’s more than enough overseas experience to ring a few alarm bells. Six years ago, a multi-party select committee report in the UK on PPP financing structures – which in Britain are called Private Finance Initiatives (PFIs) – found serious problems with them. As the UK select committee put it:

Private finance has always been more expensive than government borrowing….The cost of capital for a typical PFI project is currently over 8%—double the long term government gilt rate of approximately 4%. The difference in finance costs means that PFI projects are significantly more expensive to fund over the life of a project. This represents a significant cost to taxpayers.

In the exact equivalent of loan sharking, taxpayers may get the project quickly up front, but they also get locked into extortionate rates of payback over the decades-long life of the project – thereby diverting their limited funds away from providing other essential services, and to no observable benefit:

We have not seen clear evidence of savings and benefits in other areas of PFI projects which are sufficient to offset this significantly higher cost of finance. Evidence we studied suggests that the out-turn costs of construction and service provision are broadly similar between PFI and traditional procured projects, although in some areas PFI seems to perform more poorly. For example we heard that design innovation was worse in PFI projects and we have seen reports which found out that building quality was of a lower standard in PFI buildings. PFI is also inherently inflexible, especially for NHS [public health] projects. This is in large part due to the financing structure and its costly and complex procurement procedure.

So why foist these expensive crocks onto the taxpayer? Because they enrich the government’s friends in the corporate sector, and – even more importantly – they make the government books look so good!

The majority of PFI debt still does not appear in government debt or deficit figures; government departments can use PFI to leverage up their budgets without using their allotted capital budget—the investment is additional, and not budgeted for.

What’s not to like, for a Finance Minister, about this situation? Sure, it may cost the taxpayer a lot more over time, while the private sector gets to maximise their government guaranteed profits by cutting back on quality. And since the contracts are inherently more inflexible, the projects will be more costly to adapt to the community’s changing needs. But hey, at the end of the day, the government books look GREAT and the likes of Steven Joyce can go out on the campaign trail and brag about how strong the economy is, as evidenced by how good National has been at balancing the government books.

Interesting too, that in National’s September 1, 2017 announcement of its new National Infrastructure Commission to promote PPPs, the $1.4 billion re-development of Dunedin hospital was being listed as a prospective PPP project. In June 2016, the ODT had reported this as unlikely, for much the same reasons cited above.

An unlikely-seeming opponent of PPPs is health insurers industry group Health Funds Association of New Zealand, which lobbies against them. “Private financing of capital projects is ultimately more expensive than public financing, and comes at the expense of a future charge against operating expenses,” Health Funds said in a briefing to [Health Minister Dr Jonathan] Coleman released under the OIA.

When contacted, Health Funds chief executive Roger Styles, of Wellington, said going through the motions of considering a PPP in Dunedin was a waste of money. He admits his organisation seeks greater influence for the private health sector, but using private finance in this way brought “the worst of both worlds”. “The way I’ve seen them proposed in the health sector it’s basically capital funding exercises, which all they end up doing is providing expensive funds.”

But that Steven Joyce, he keeps on seeing things that other people cannot. He’s what PPPs look like in Joyce World:

“PPPs are very effective at getting quality long-lasting infrastructure built more quickly and using private capital to stretch the country’s capital budget so we get more built,” Mr Joyce says. “The National Infrastructure Commission will be responsible for expanding the number of PPPs so we can grow our $32.5 billion investment and have more new hospitals, schools and transport projects sooner.

National will merge two units from the Treasury to form the core of the Commission, with an additional $2.5 million a year in funding to operate it. PPPs can provide new facilities at a lower whole of life cost than traditional development models,” Mr Joyce says.

Really? And if you believe the private sector can borrow money more cheaply than governments can, then Steven Joyce has a big, big budget hole in Labour finances that he’d like to sell to you. Is there any way a future Ardern government might be able to rescue New Zealand from the PPPs trap? Six years ago, the UK select committee suggested bringing them all back in-house:

“The most straightforward way of dealing with current PFI contracts is for the government to buy up the debt (and possibly also the equity) once the construction stage is over … Although government debt levels would be higher the public finances would not be any less sustainable. This is because it would become more affordable to service the visible government debt rather than the hidden PFI debt.”

Perhaps Winston Peters can save us. May he can stop this Joyce-conceived, Treasury-fuelled National Infrastructure Commission (NFC) before it can get off the ground. He’d be doing us all a favour if he put the NFC on a kill list, during the negotiations to form the next government.

The new St Vincent album from Annie Clark has been prefigured by two terrific singles : “New York” and its Pacific Coast counterpart “ Los Ageless” – which is a dissonant breakup song (about the sudden end of her relationship with Kristen Stewart?) with this heartfelt lyric:

The personal loss is set against the inexorable impermanence of the city itself and of well, everything that matters:

In Los Ageless, the waves they never break
They build and build until you don’t have no escape

Here’s the great ‘New York’ song in case you missed it first time around:

And for old times sake, here’s where most of us first encountered Annie Clark, with that “Now Now” cut from her first album ten years ago: